It might be no secret, or you might not know.  I grew in the Upper Peninsula of Michigan, home to great classic railroads such as the Duluth, South Shore & Atlantic (DSS&A), Soo Line, and Wisconsin Central.  L'Anse MI played host to all 3 through the eras, and now is home to Canadian National.  I grew up in the Wisconsin Central era.

In 2019, I was home visiting, and by happy accident, happened upon a CN crew servicing the L'Anse area. 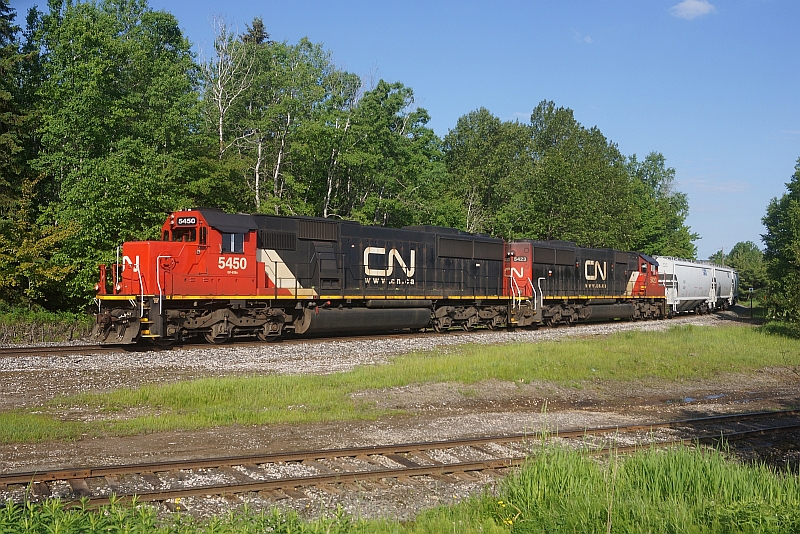 In the 1970's Soo Line served this lake-side village, and boasted a still-used, DSS&A built wooden station.  Soo Line crews worked out of the depot, which offered much needed shelter from the harsh UP winters.

In the 1980's Wisconsin Central purchased much of the Soo Line's trackage in Wisconsin and Upper Michigan.  WC continued to use the rapidly deteriorating station for much of the 1980's however the depot was torn down in the late 1990's.

In 2001, the Canadian National purchased the WC.  Slowly the vestiges of Maroon and Gold gave way to Black & red.  Canadian National does not permanently assign a unit to the UP lines, so motive power changes monthly.  There's footage on YouTube of an BNSF ES44C4, and NS Heritage unit powering a train in this very spot!  BC rail Dash 8 and Dash 9's, plenty of CN units, and even as we see above a nicely matched set of SD60's, that CN bought 2nd hand from EMD/Oakway.

CN now serves the area through a local train based out of Ishpeming MI.  No longer do crews shelter in the depot, tools linger in an old Ex-MILW boxcar on a siding, where the depot once stood.

Railroading is still a big deal in the UP of Michigan, however many might simply miss it.  With the thick woods, and harsh winters, railroad photography seems non-existant, unless you know where to look.  CN runs many trains through the penninsula, to L'Anse from Ishpeming, to Marquette and Ishpeming from Escanaba.  Trains across the top of Lake Michigan from Escanaba to St. Ignace and Sault St. Marie, locals to Munising from St. Ignace, and occasional service on the western tip of the UP, near Ironwood MI.

Not forgotten are the local lines, with trains from the LS&I on the Marquette iron range; the Mineral Range Railroad hauling ore concentrates from the Eagle Mine to CN in Ishpeming; the Escanaba and Lake Superior; and even a mining railroad delivering aggregates to Port Inland MI, on the northern tip of Lake Michigan.