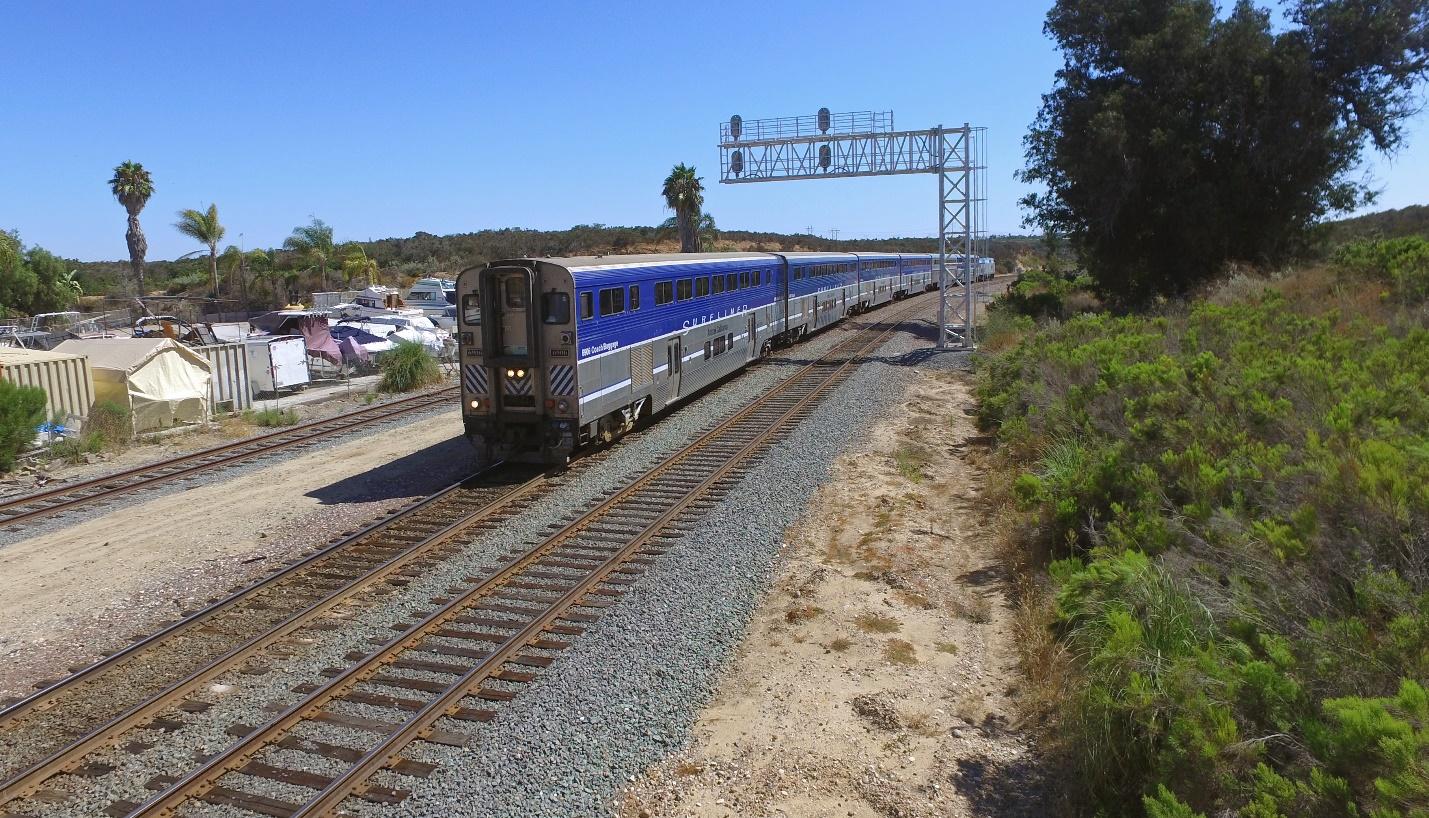 Image 1: A583 Knocks down CP Miramar. In the days of steam, the hill was a helper district, with a 2.2% ruling grade on the West side and a 2.09% ruling grade on the East side. Not only was the Wye utilized for turning helpers, but the tail track also acted as a five-mile branch into Camp Kearny, later Camp Elliot. When Camp Elliot was shut down and the property redeveloped into the much smaller MCAS Miramar the military cut the branch back to the airfield, and eventually abandoned the whole thing. If you can get on base, Miramar Way follows most of the original ROW. If you can't and you ever find yourself going either North or South on the 15 at the 163 interchange, look right or left respectively. The buildings off to the right of the Northbound lanes are built on top of the old installation the branch served. If you’re in the far right lane of Southbound 15 between Miramar Way and the 163 interchange you may catch glimpse of the cut the ROW went through as it approached the facility. The leads to a small yard at the facility were located directly where the interchange sits today. (https://www.google.com/maps/@32.8674991,-117.1140003,1585m/data=!3m1!1e3 Satellite view of the freeway interchange, scarring from ROW can be seen paralleling 15 before curving away). Around the same time, a small industrial park was built off the tail of the Wye. Today Watco, under the name Pacific Sun, utilizes the western leg of the wye to switch the park a few nights a week. Santa Fe had a station in the middle of the wye up through the fifties, located where the fence line for the industry is today. Legend says CP Elvira, which protected the end of double track on the RR east side of the hill, in Rose Canyon, was named after the daughter of the station agent. CP Elvira was removed a few years back as part of the ongoing double tracking project, replaced by CP Rose. 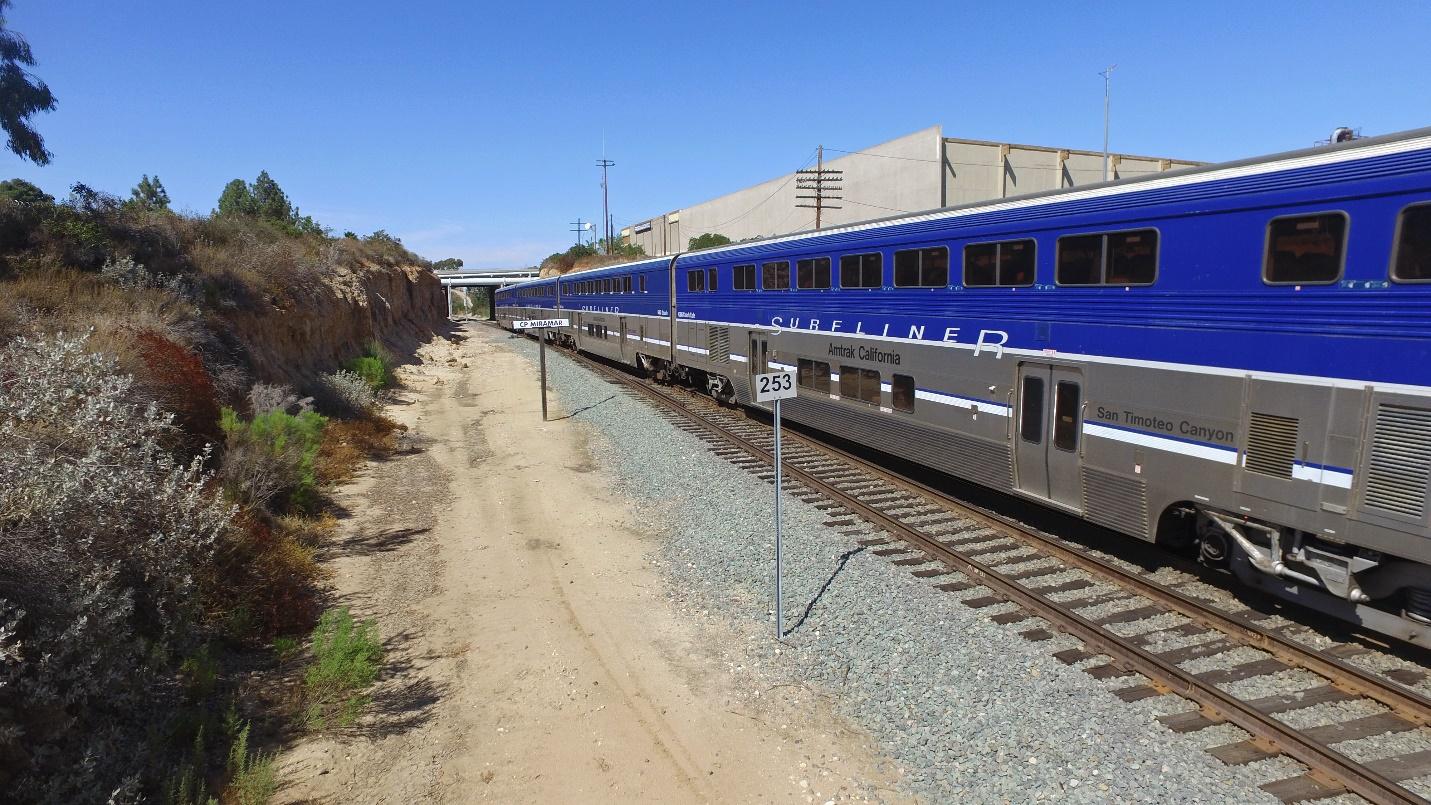 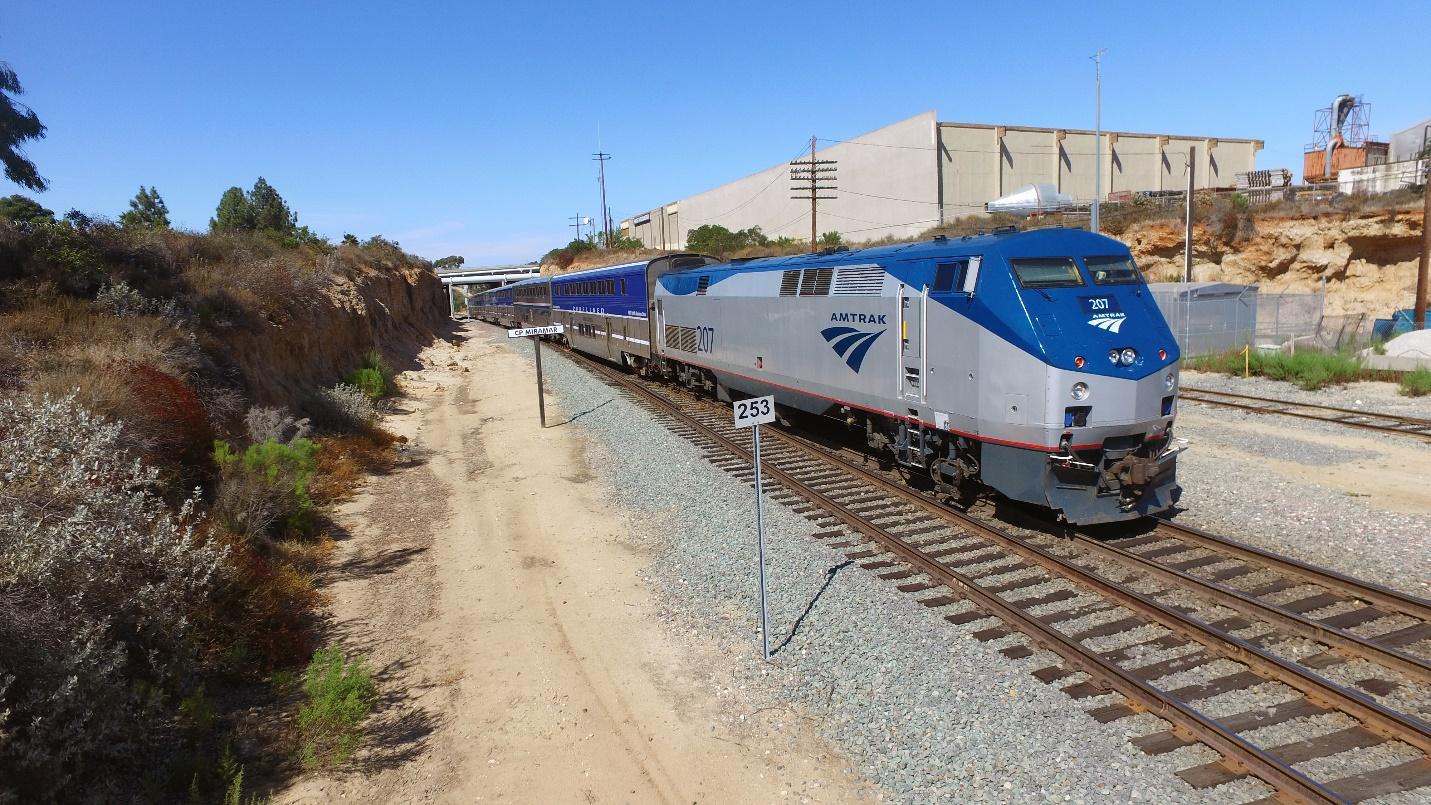 10 minutes later, Coaster 654 crested the summit and rolled into my viewfinder (Image 4). After they rolled past, I went for a little hike, ending up on a cut overlooking the signal bridge protecting CP Miramar to the RR West, and the straight shot down into Rose Canyon to the RR East. This is where I was trying to solve my mystery. Rumor has it the Santa Fe’s original grade down the east side of Miramar, built by California Southern, continued with the precedent they set on the original alignment running east from Oceanside to Temecula. That is, they built it directly down a wash. Eventually, much like Temecula alignment, they got tired of the floods. The line was then realigned onto its current alignment, higher above the wash. Supposedly remnants of this original alignment are visible in the canyon. This is what I was hunting for. But, photographing trains came first. They may be here all day everyday now, but one day they won’t. Taking a picture is free, and I think of it as taking future archival photos. Several trains went by, and only Coaster 656 was photogenic enough to be worth posting (Image 5). While waiting in between trains I searched for ROW. The only evidence I could find was the road running behind the cut I was standing on (Image 6). However, shortly after it passes the cut it loses it’s well graded, ex-ROW feel and starts rising and falling with the land like every other access road. 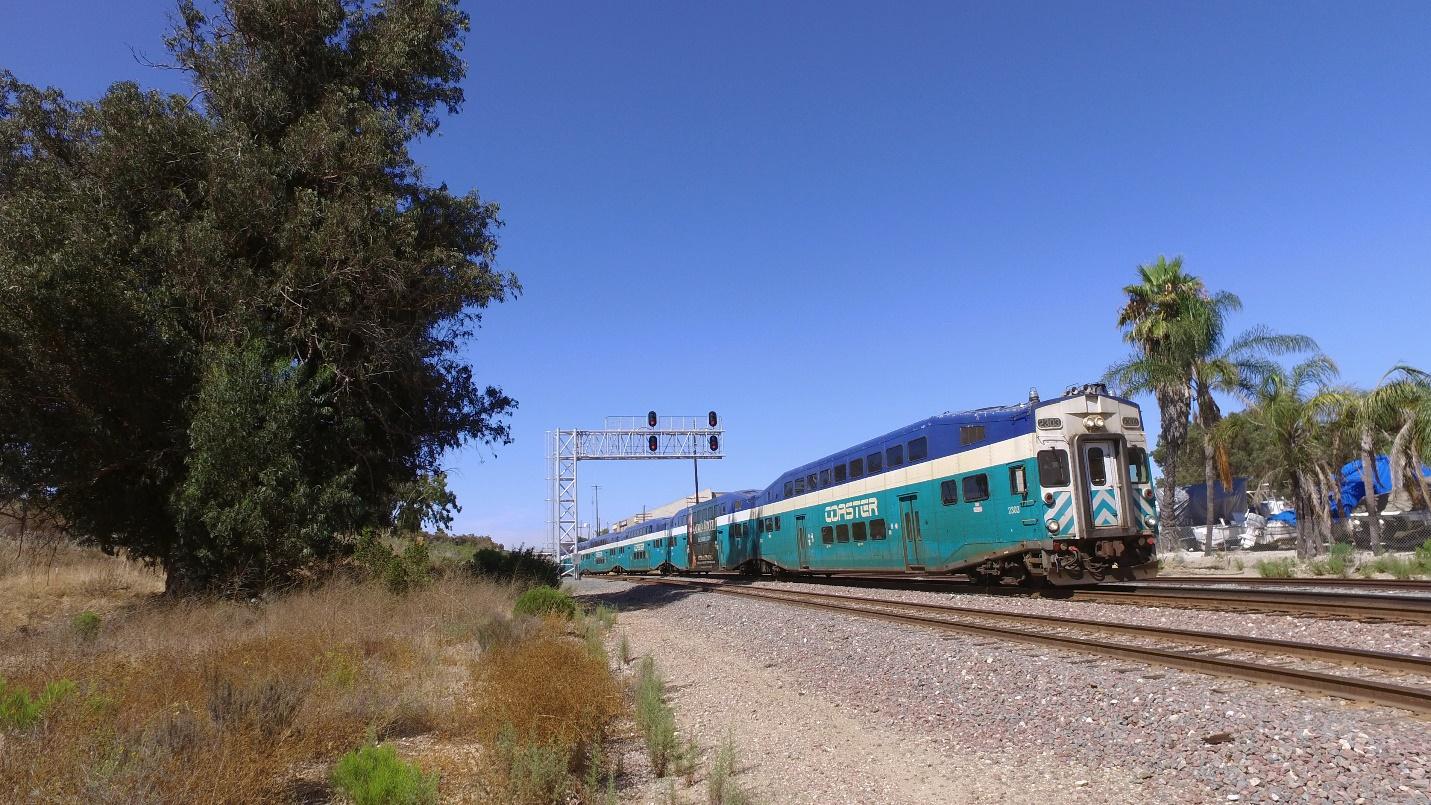 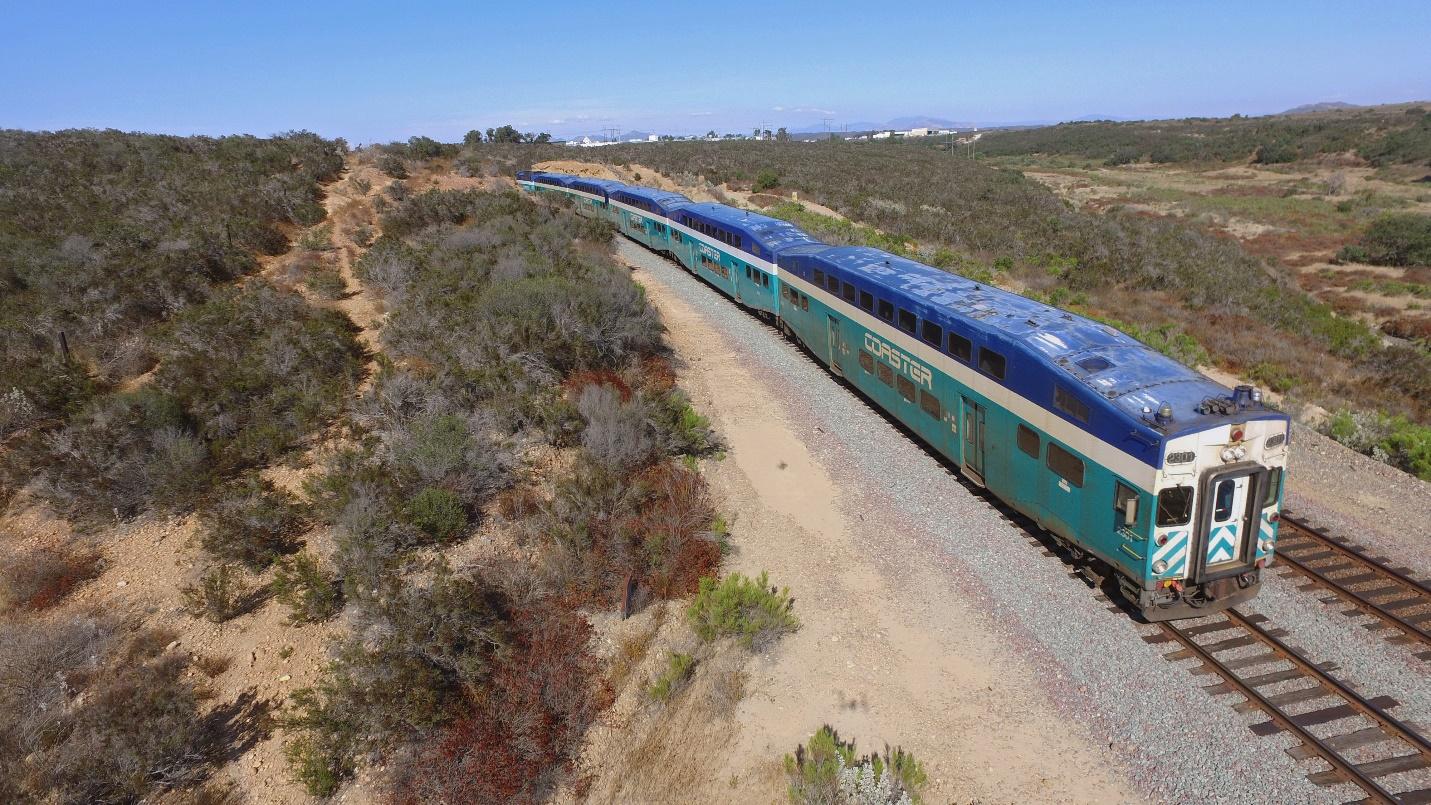 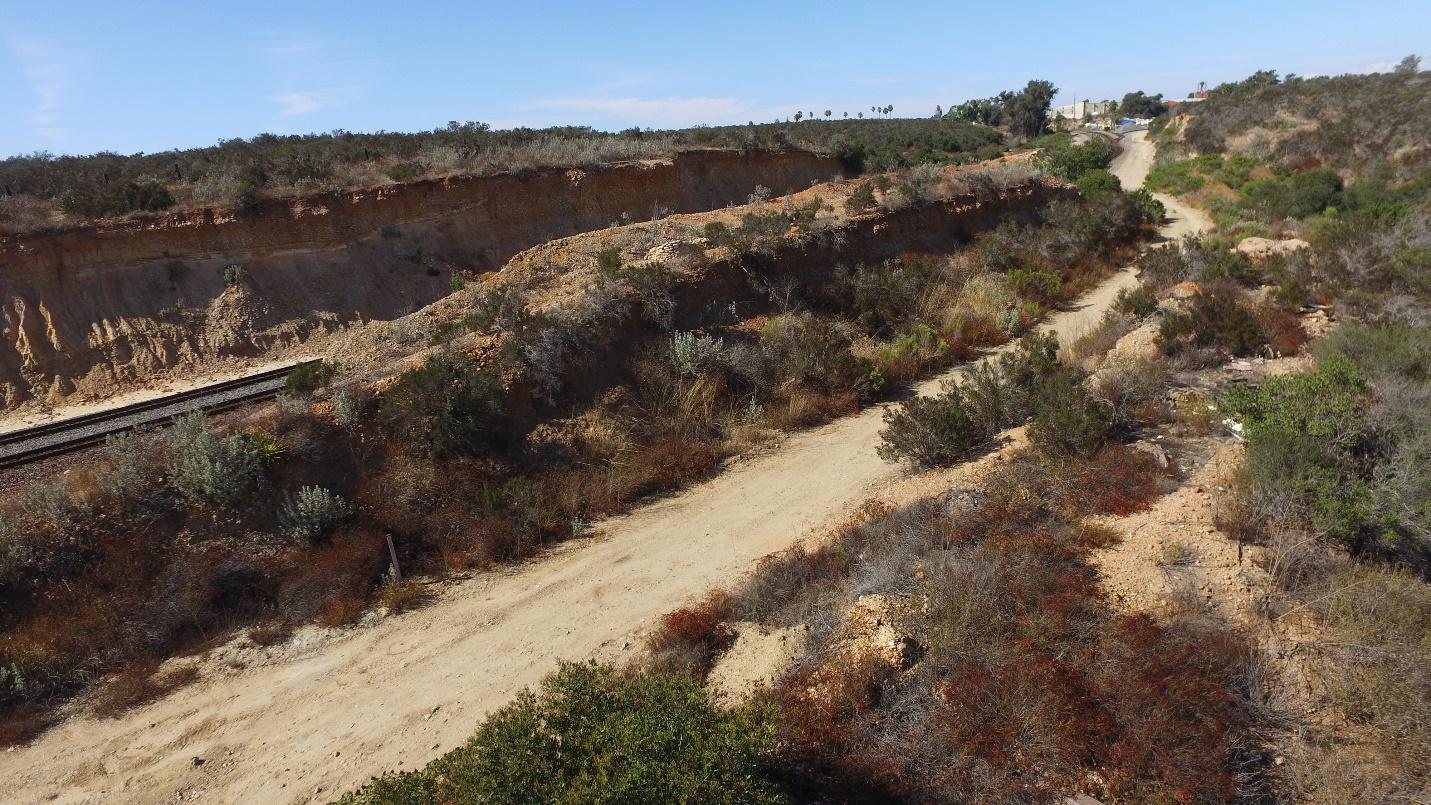 Image 6: Access road, and former ROW? The road cuts through the same Mesa as the current ROW, in a spot that looks much easier to cut through and provides a straight shot down to the wash. The fact that the road also runs through a cut screams former ROW. None of the other roads around cut through the land, just rise and fall with it. The road is well graded from where it pulls away from the ROW to where it reaches the wash. However, the drop down to the wash is awfully steep for a railroad (partially visible in image 4), and the road quickly starts to rise and fall like the others as it parallels the ROW. If the original ROW was really in the wash, it’s possible the roadbed has since been washed away. 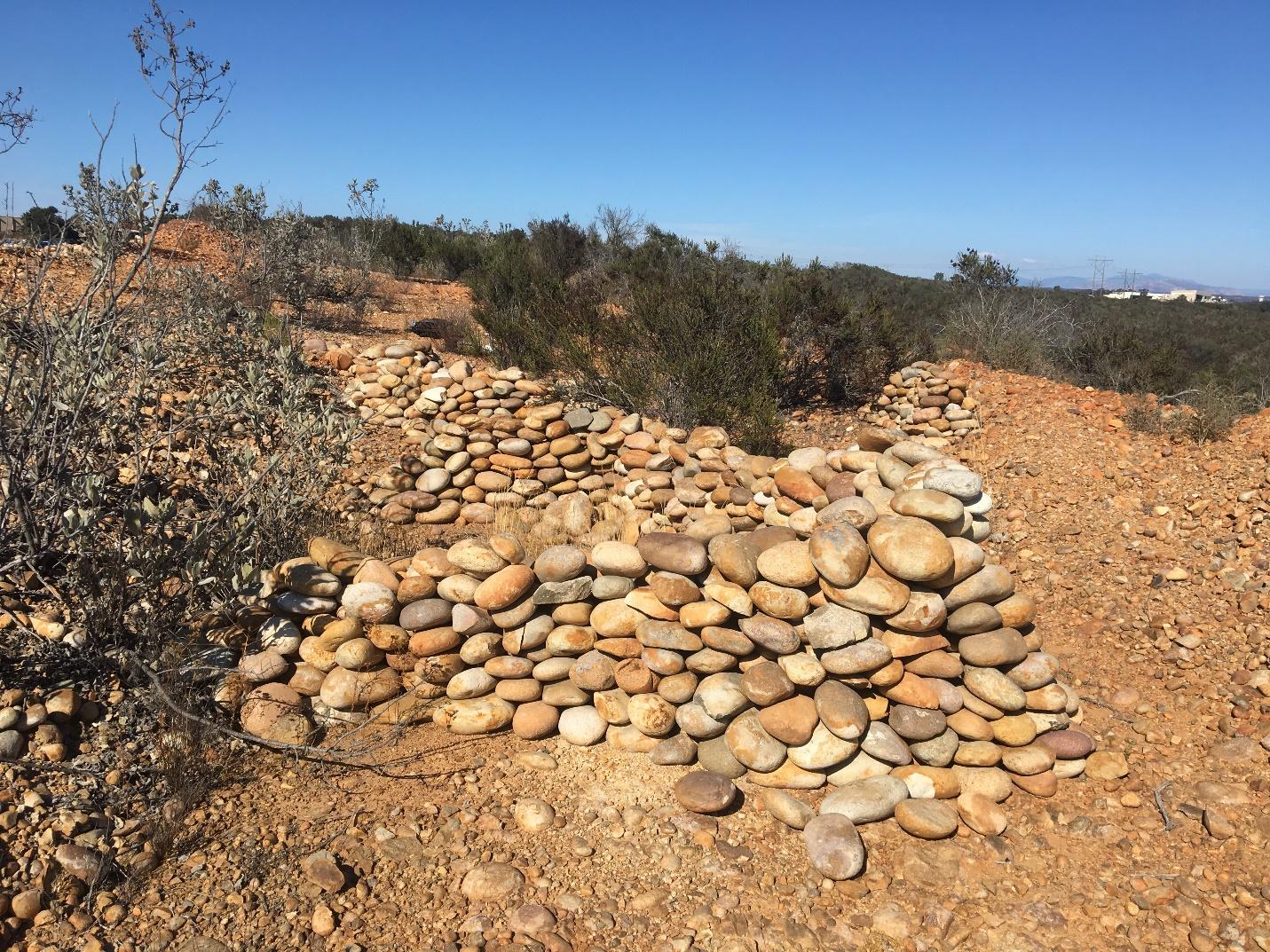 Image 7: My only mystery unsolved, I now hiked out with two more. The cut I was standing on top of a had a rather complex stone wall on top of it. Had I stumbled across something the military used for training? Had I trespassed into someone’s meditation place? Either way, it didn’t look like it was recently built. Similarly, the cut the road went through was littered with roofing material, wood decking, conduits, concrete foundations, and more random debris that seemed to come from a structure. Could the Santa Fe have dumped the demolished remains of the station down the cut into the canyon, is it something from Camp Elliot? I have no way to know. I should’ve suspected I’d be hiking out with more questions than answers, the rabbit hole always runs deeper.

Stay Tuned: In the next episode of chasing ghosts in the dark I try to find evidence to the rumor that California Southern, Santa Fe’s subsidiary that built the Surfline, initially tried to tunnel under Miramar to avoid having to climb the hill. The collapsed, unreinforced portal was supposedly on the western end, and was hard to spot even 50 years ago. The western end is Sorrento Valley, and in the past 50 years nearly the whole valley has been transformed into parking lots, office complexes, and large bio-tech campuses.