My model here is decorated in Amtrak's "Day 1" 50th anniversary scheme, however Bachmann also released road #300 & #305 in their 5 unit "Phase VII" scheme.  I'm still waiting to see what units #306+ will look like in the next standard Phase VIII scheme proposed. 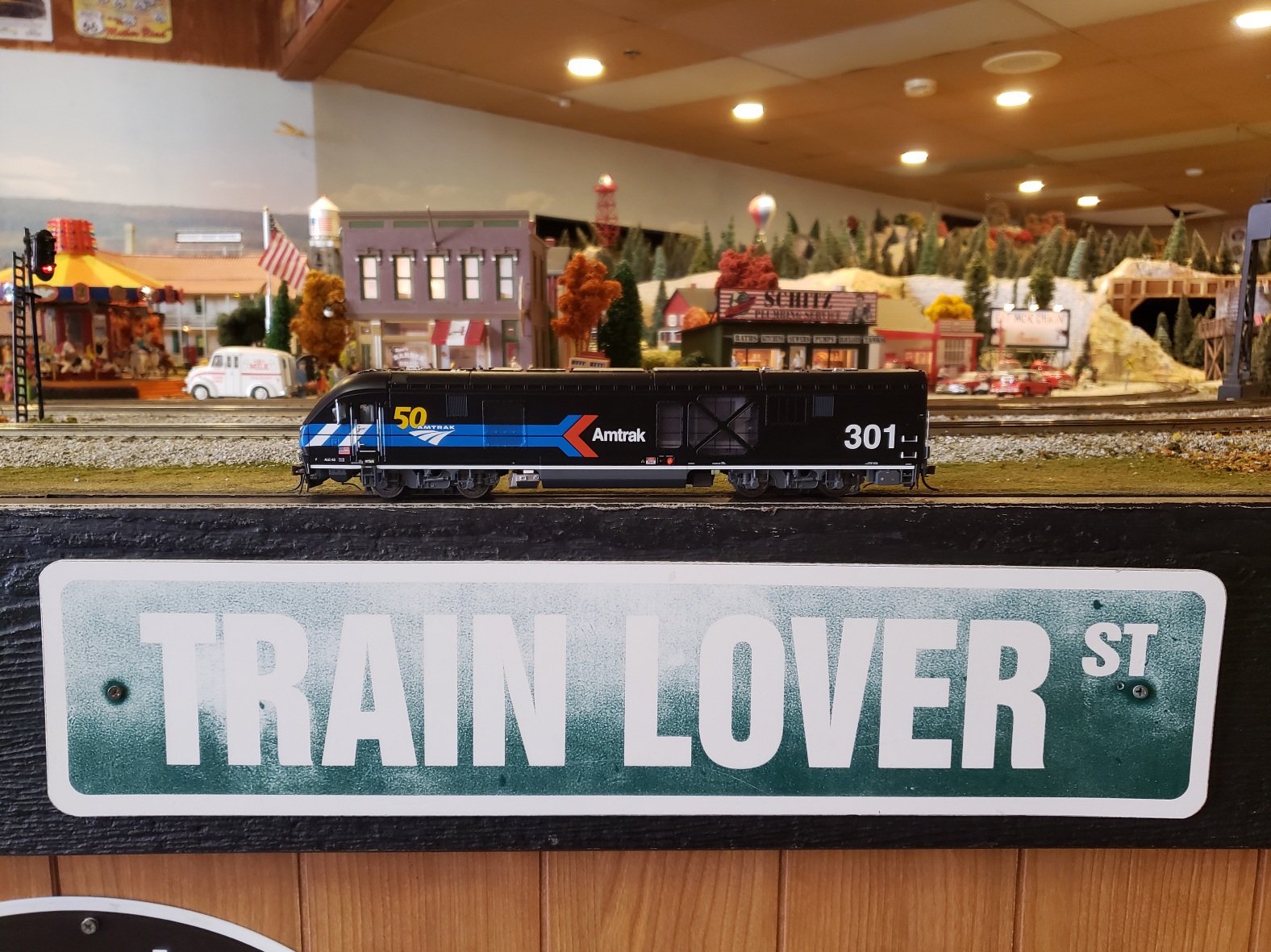 As you can see, the locomotive is black!  Amtrak's first publicity photo, for Day 1, was an E unit painted in a very similar scheme to this ALC-42.

The locomotive comes well packed in a clear plastic case inside of a colorful cardboard box, consistent with more modern RTR model train packaging.  Mine came with DCC WowSound, as noted on the end of the box (not shown). 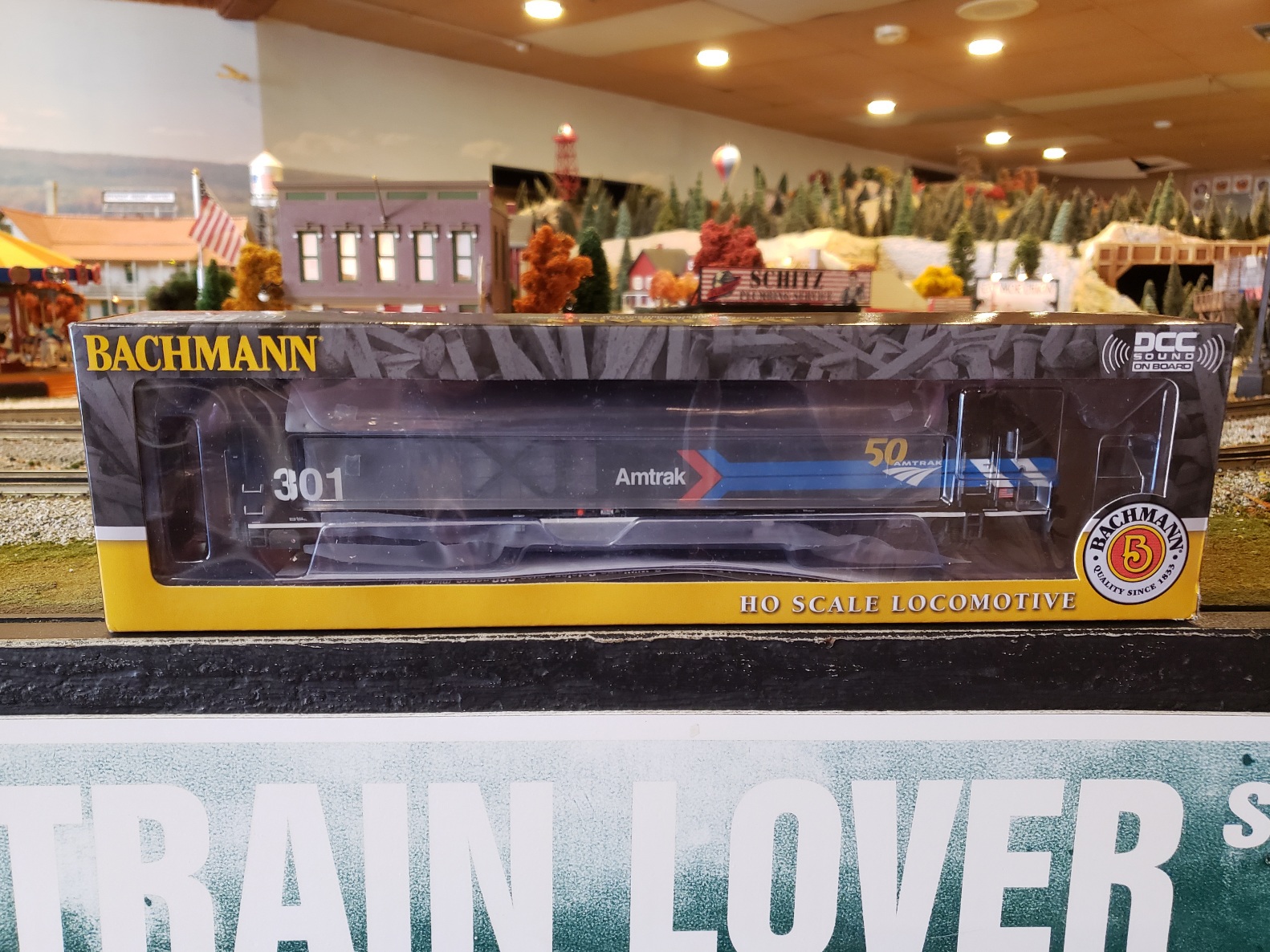 Why do I lost it as "ultra-contemporary?"  Well, let's be honest, these locomotives were delivered to Amtrak in 2021, and are STILL not in revenue service.  I think this may possibly be the first time in history that a model train manufacturer has released the model of the prototype before the real thing was in service!  Yes, the ALC-42 has moved under it's own power, on an Amtrak train already, but only for testing purposes.

I'm really excited to get this model pulling my Amtrak trains, but I'm still waiting for a Kato P42, and the Kato Viewliner baggage car. 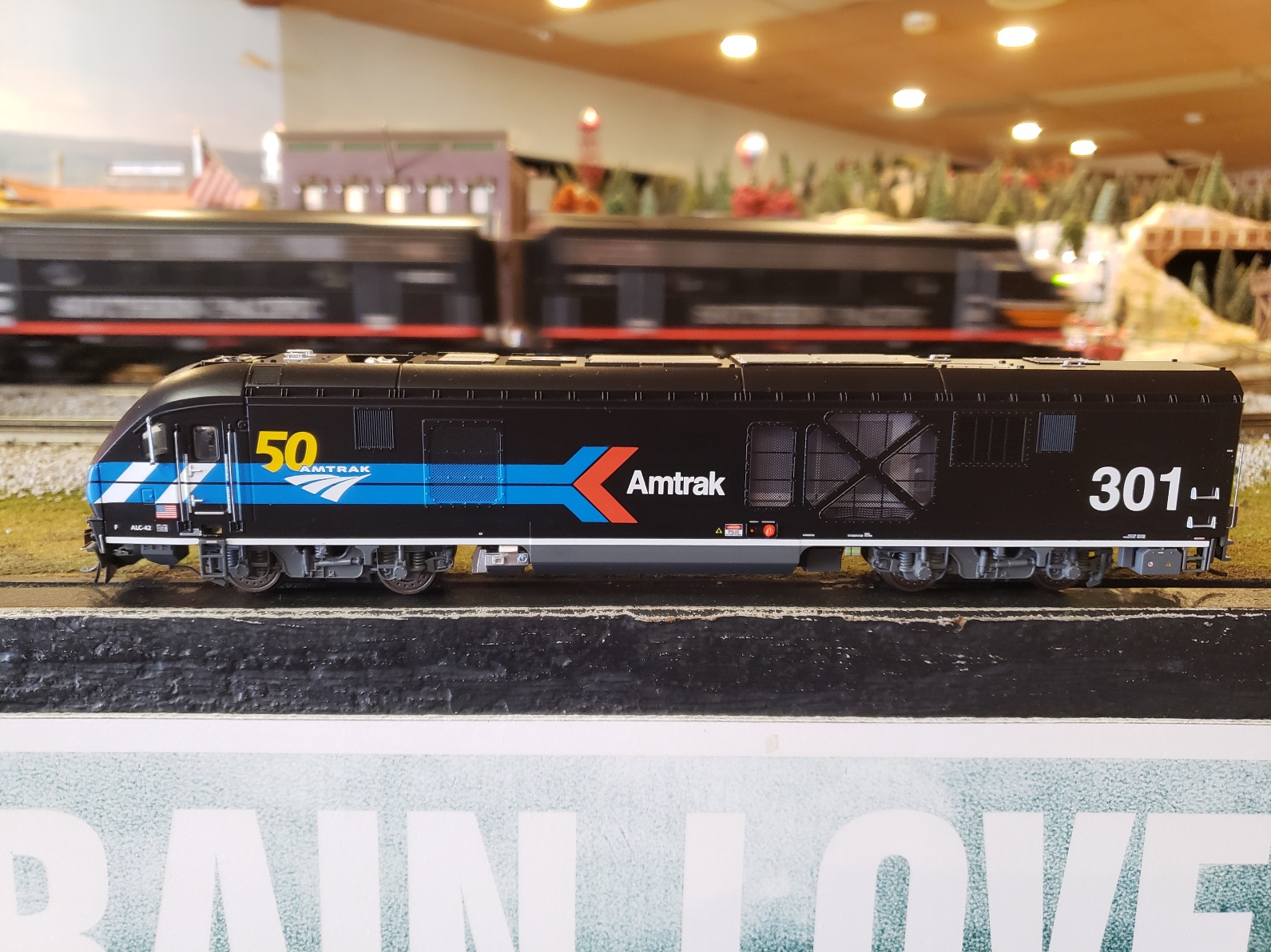 I did not test my unit on DCC, as we don't have DCC at the Old Town Model Railroad Depot at this current time.  However, from my employee's videos and favorable review of his SC-44 in the Coaster scheme, I judge this one will be just as same.  WowSound has some limited features, so it won't be as good as Tsunami 2 or Loksound 4/5.  I opted for the WowSound however, because of the limitation of getting the appropriate QSK-95 sounds on Loksound. 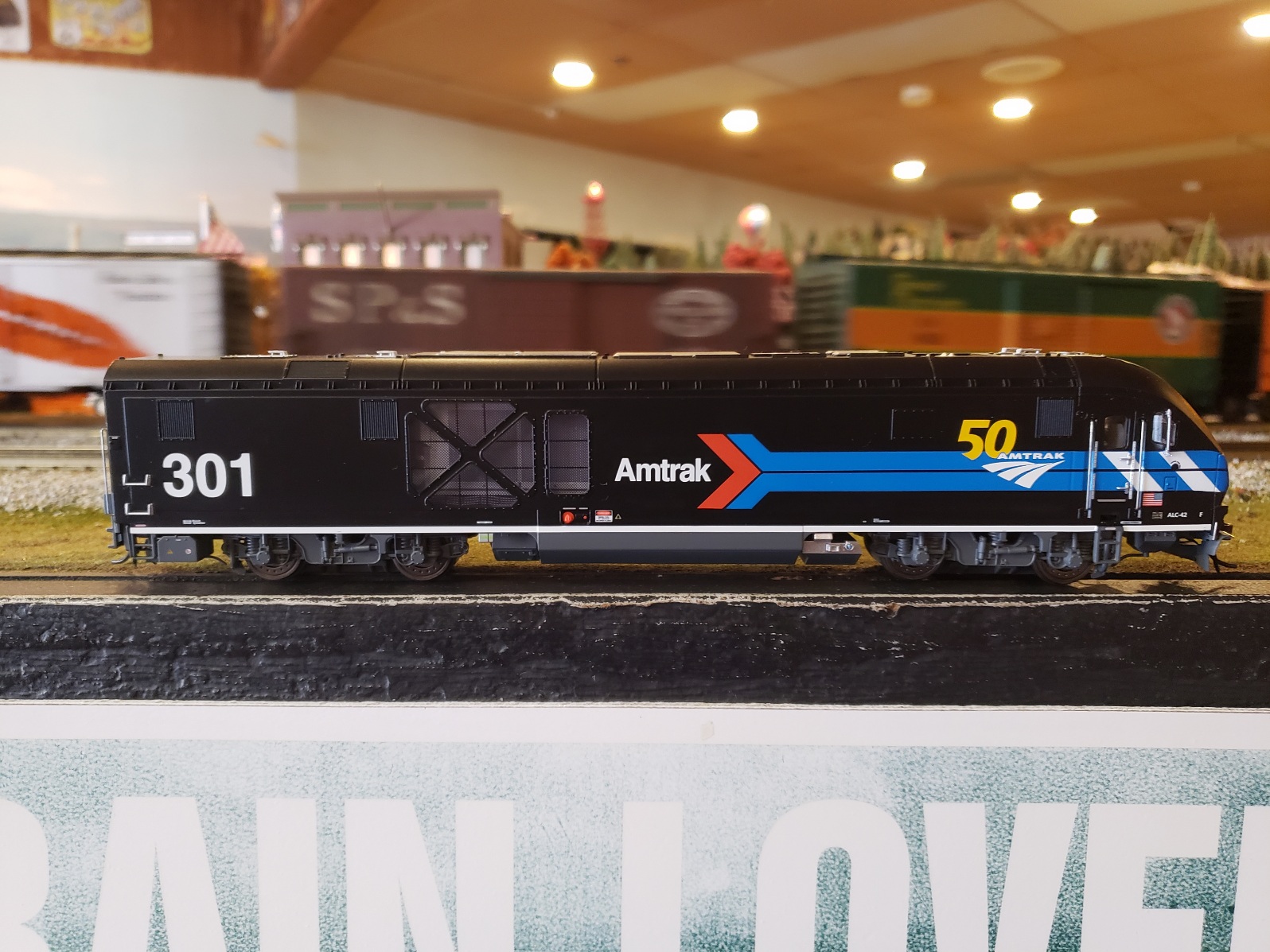 I did check the wheel gauge, which was correct on all axles.  My model was "new," however all the wheels have wear.  I'm assuming that Bachmann tested the models before leaving the factory.  Coupler height was in line with standards.  The locomotive weighed in at 1 pound 3 ounces.

Details look sharp, and from all photos I browsed are correct in location and color. 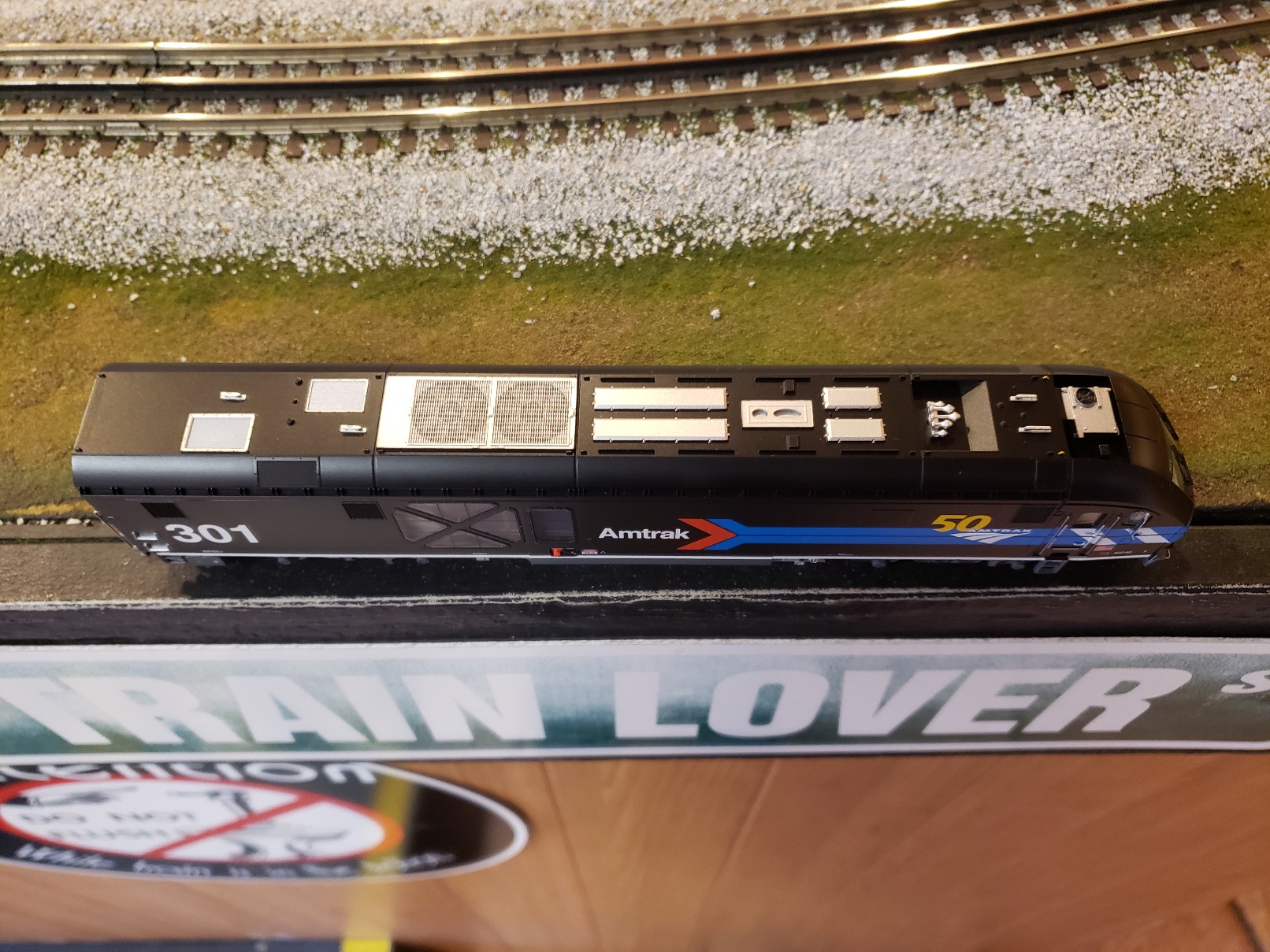 Overall, I'm highly impressed with this model, and I think Bachmann did an outstanding job modeling it.  How much people desire to avoid Bachmann products, there are plenty that are not available any other way, and this is a prime example.  Price is steep, at $475 MSRP, however discounts range down to about $275 for the sound units if you find the right retailer.

I'm giving this a 4 out of 5 due to the high price, and limitations of WowSound.