Winter comes but once a year here.  Usually lasting from Mid-November until Mid-January.  This photo essay is part 1 of a 2 part Winter special.

Created in 2014 by an enterprising, experienced, and motivated group of friends, headed and financed by O gauge enthusiast Gary Hickock, the layout at the Old Town Model Railroad Depot (OTMRD) was in danger of being scrapped forever at the end of 2019.  Then in walked a family, David, Mana, and their son Miles.  To their dismay Gary explained to them in his normal introduction to everyone who walked in, that the Depot was closing at the end of November, just shy of Christmas!  This couple ended up making an offer days later, saving the Depot, and along the way finding me to help run the business, and the layout.

2020 has not been nice to most every model railroad club, museum, and group worldwide, OTMRD none the less faced shutdown after shutdown.  From Mid-August until the first few weeks of November, we enjoyed some visitors "like normal."  Once again we added snow to the city scene as had been done for the previous 5 years, but we don't get to share it with the public!  Read along in this multi-part series showing some intricate scenes on our 'normally open to the public' O gauge layout.

As with any museum, OTMRD depends on the generosity of the viewing pubic.  Please, if you can do so, made a donation though OTMRD's website, or purchase some products! https://www.oldtowntrains.com/ 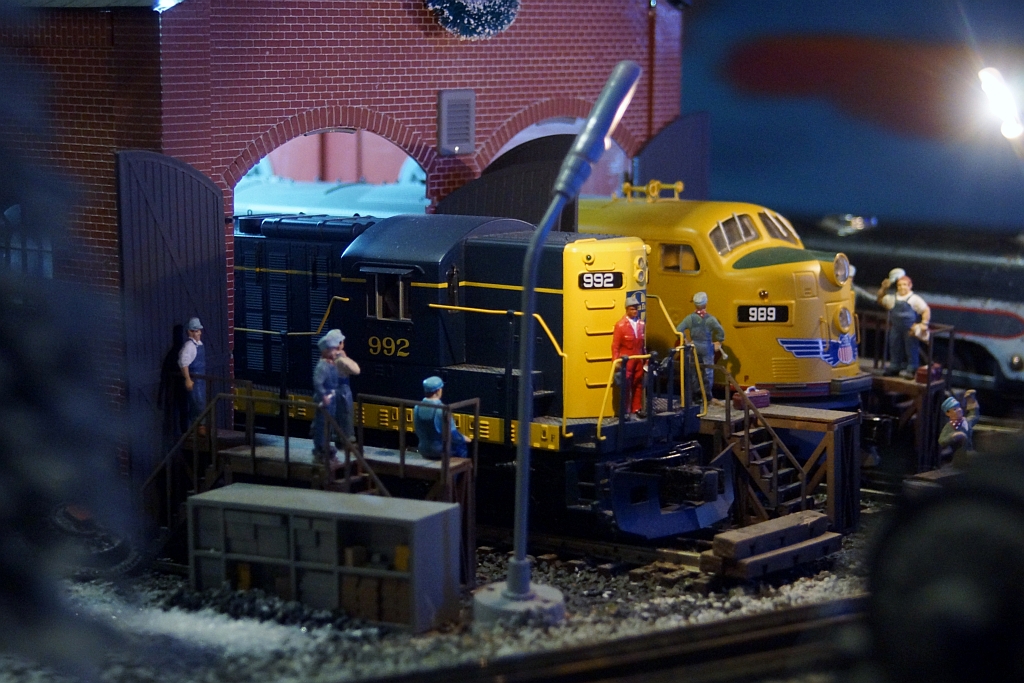 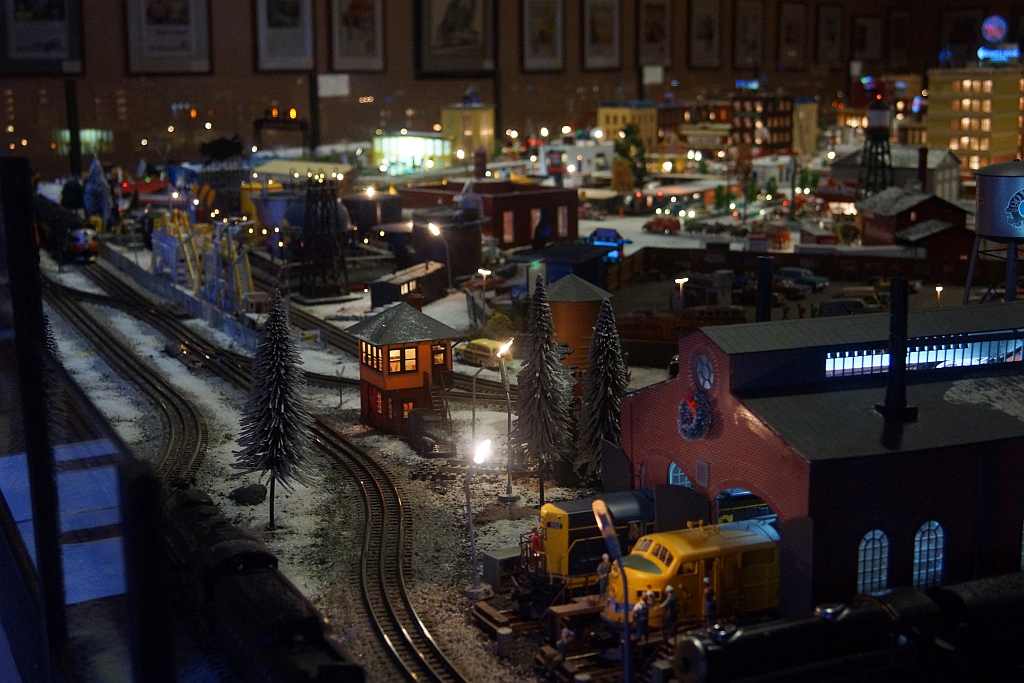 A nice overlook of the nighttime city. In this shot, one can see the engine shed in the lower right, and in tank farm in the center.  Viewing public during normal operations gets to witness the magic of the big city at night! 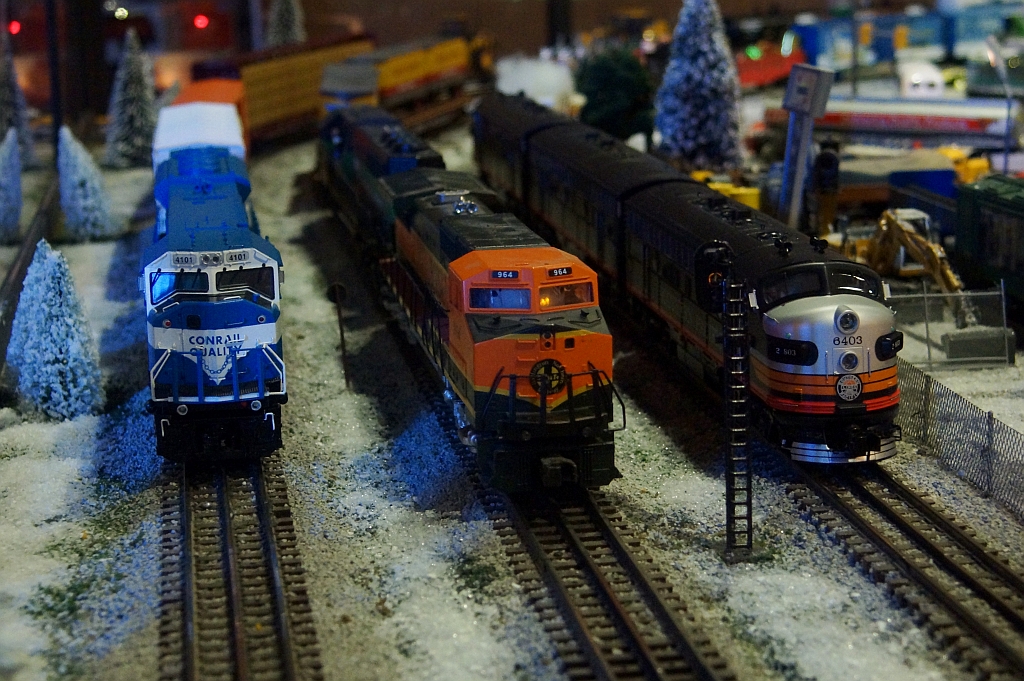 Three trains rest on the outside mains, and center siding.  Products from MTH are primarily used to power the O gauge trains on the OTMRD layout, equipped with MTH's ProtoSound2 or ProtoSound3 systems. 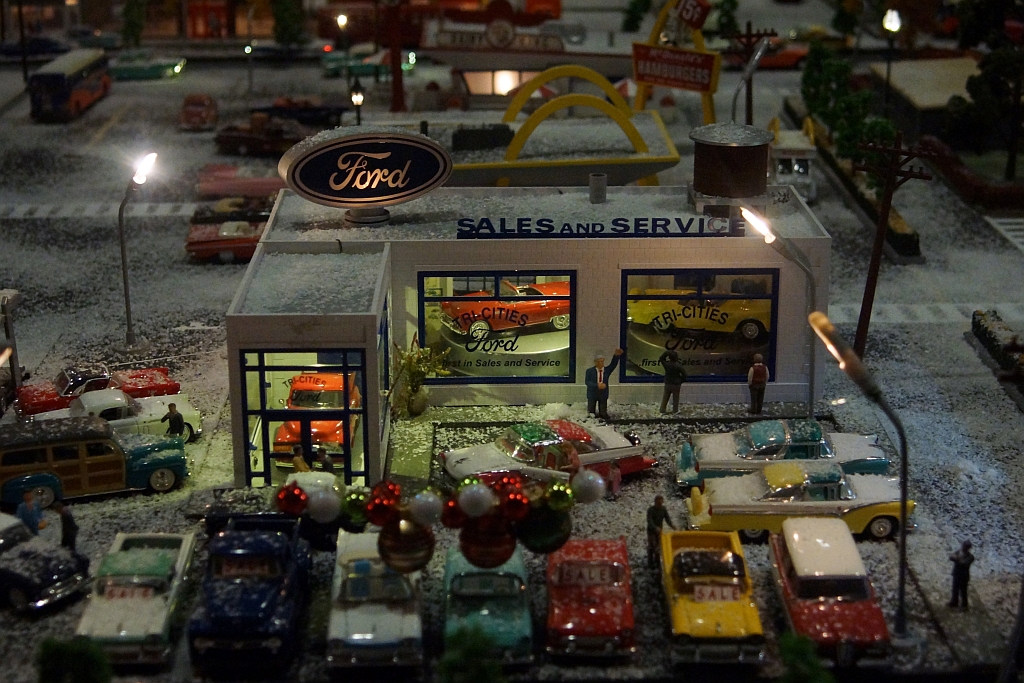 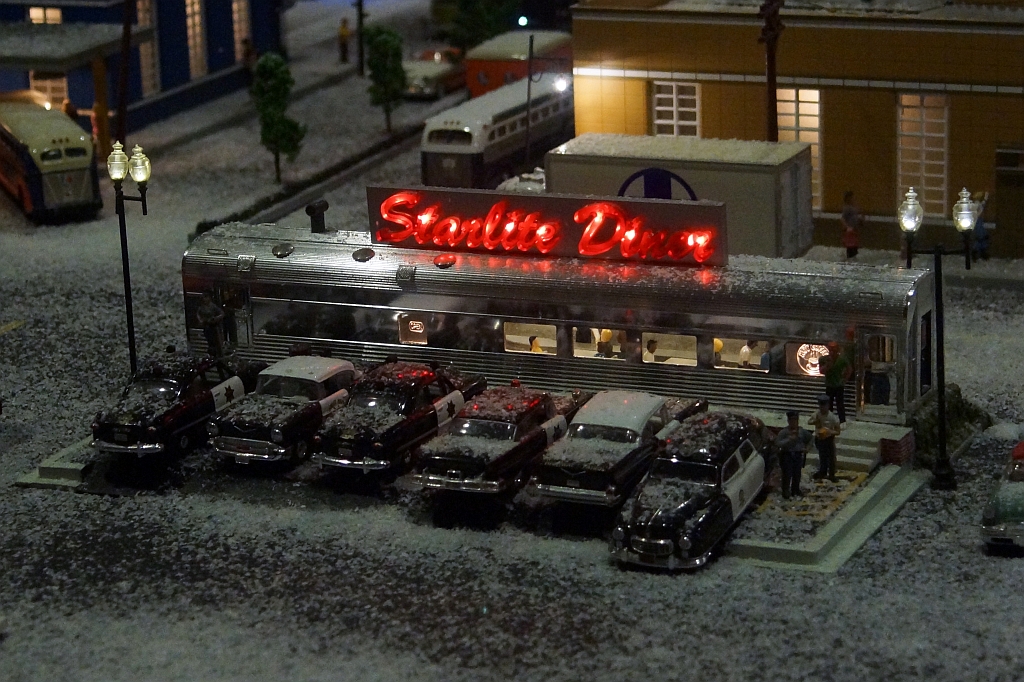 To the dismay of police officers everywhere, including a regular visitor, and retired Oceanside CA police officer... We see the local departments are nearly all on break at the Starlight Diner! 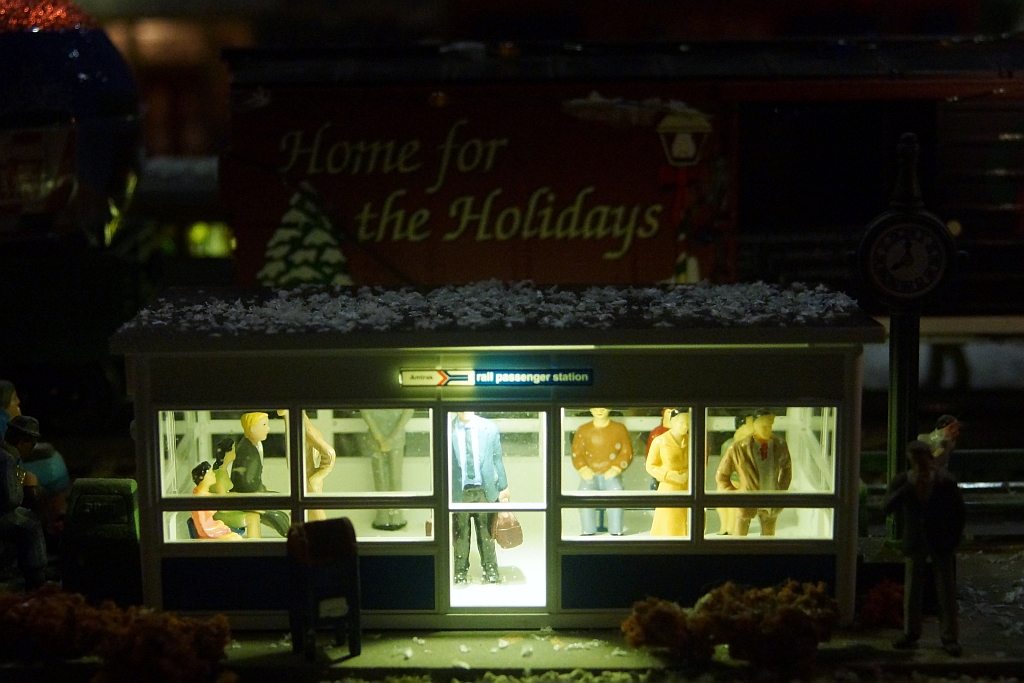 Although the layout is set in 1959, some vestiges of more modern railroading appear from time to time.  From volunteer operators running modern trains, to this Amtrak passenger shelter, much appreciated in the winter! 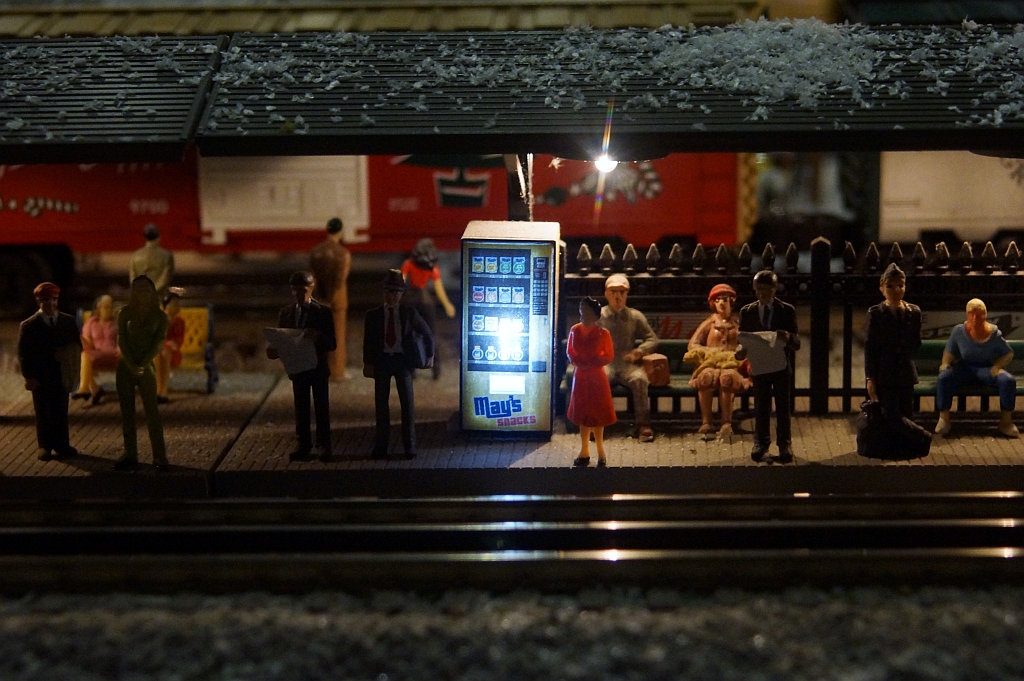 Snack machines like this were not around in 1959 for the most part.  However, the night time scenes lend well to including this detail. 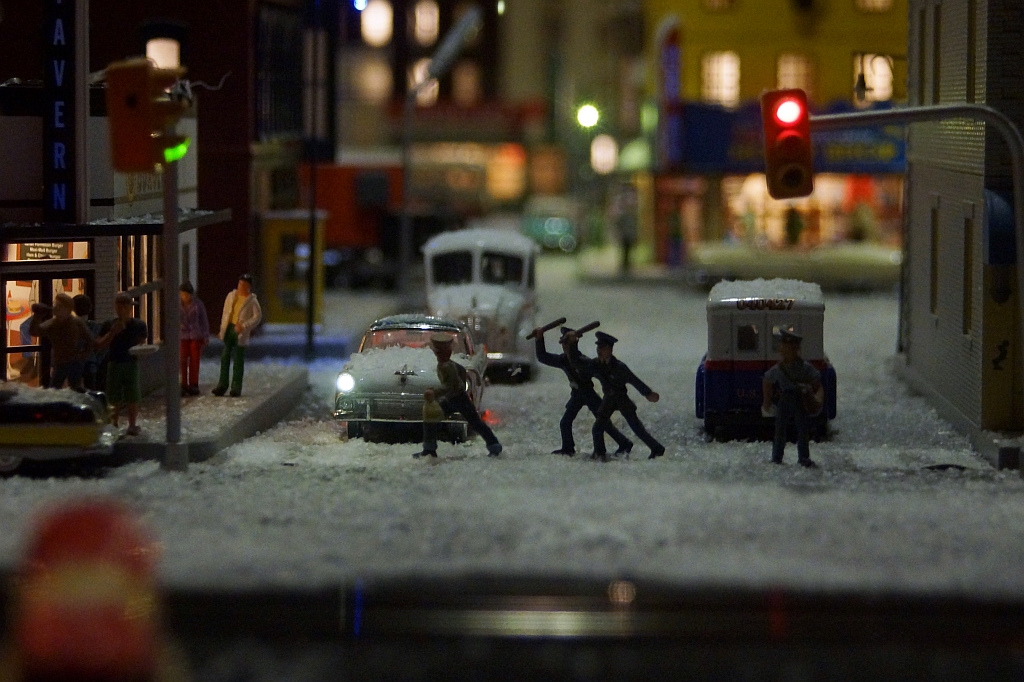 Included with the visual ambiance of night lighting, street lights, and lit automobiles, is the inclusion of big city sound effects.  One of the most prominent are the police whistles and fire sirens.  Here we see two officers chasing a criminal while the local postman looks back surprised as the trio just sprinted past. 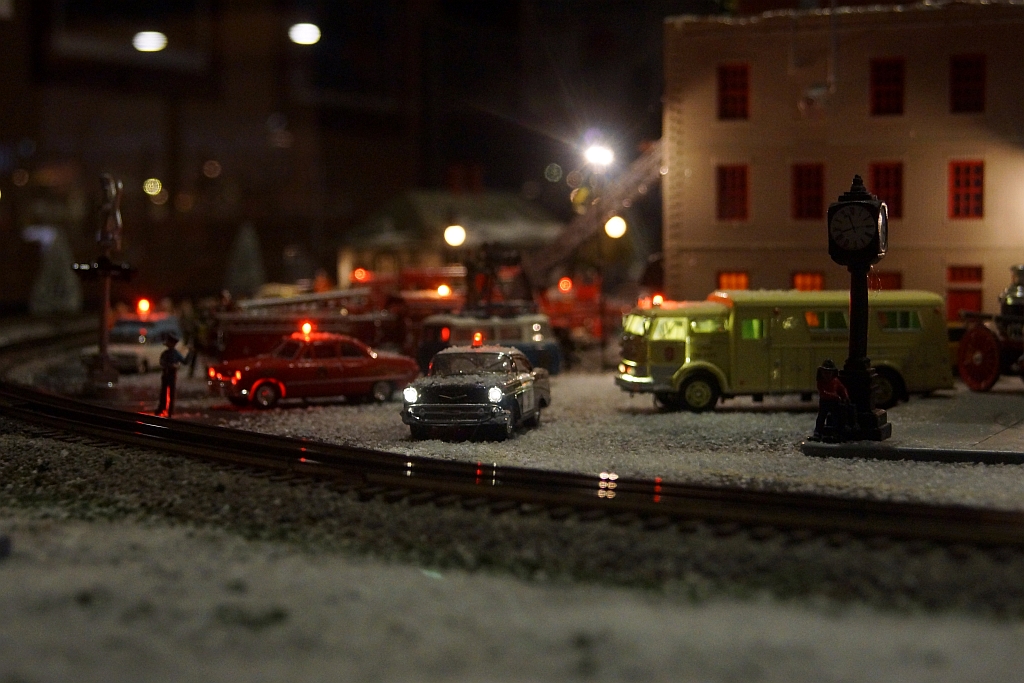 In the far back corner of the layout, fire fighters have their hands full, with a fire in the "Internal Revenue Service" offices.  To top it off, a lady has fainted in the crowd of onlookers. 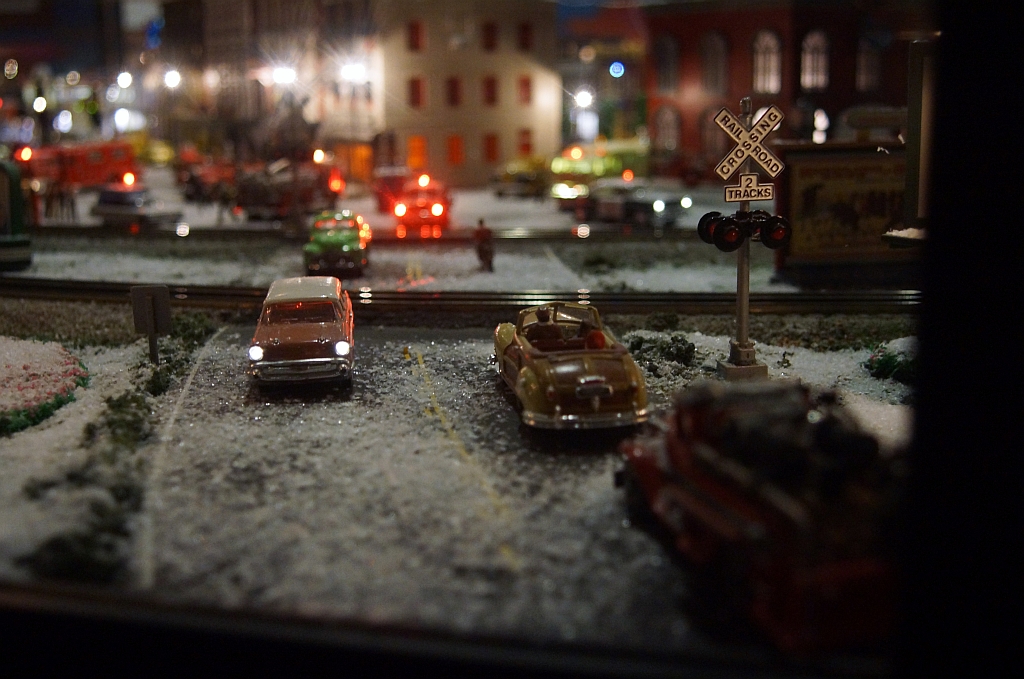 Traffic is seen leaving the area if the fire, while another fire truck waits in traffic attempting to head towards the fire.

While this was a brief, but detailed look at some intricate scenes on the OTMRD layout, countless others await visitors.  While the ongoing pandemic has indoor museums locked up and closed, we at ModelRailroadTips.com and myself, Manager of the Old Town Model Railroad Depot as my full time employment, wish to continue to share the layout with you.

Please note that with the Covid-19 worldwide pandemic, visiting hours are drastically reduced, and can change often.  Check the website on the day of your planned visit for current hours. https://www.oldtowntrains.com/visit/

Stay tuned for more articles in the days and weeks following Christmas!  My initial photo edits identified 20 winter photos, with countless non-winter scenes to come soon. Winter Part 2 is next, shortly after Christmas.