The Birth of a Slogan

The Birth of a Slogan

Once & a while I make small changes to Model Railroad Tips. This week saw none the less [Ed. originally published August 15th 2011], the most subtle, but intriguing change. This article was originally intended to go with the September Newsletter, but I've decided to save that space for something more train related, hence the "Lets get back to trains..."

As you can see the old red text saying "Online & PDF Articles" is gone, now replaced by "Lets get back to trains..."

Read more: The Birth of a Slogan

Blaine, the production manager of Exact Rail [Ed. formerly, Blaine now heads his own company, Arrowhead Quick Review: Arrowhead Models Greenville 2494 Railgon), brought out the new, yet to be released coal hoppers that Exact Rail has been hinting at.  Here are four sneak preview shots... 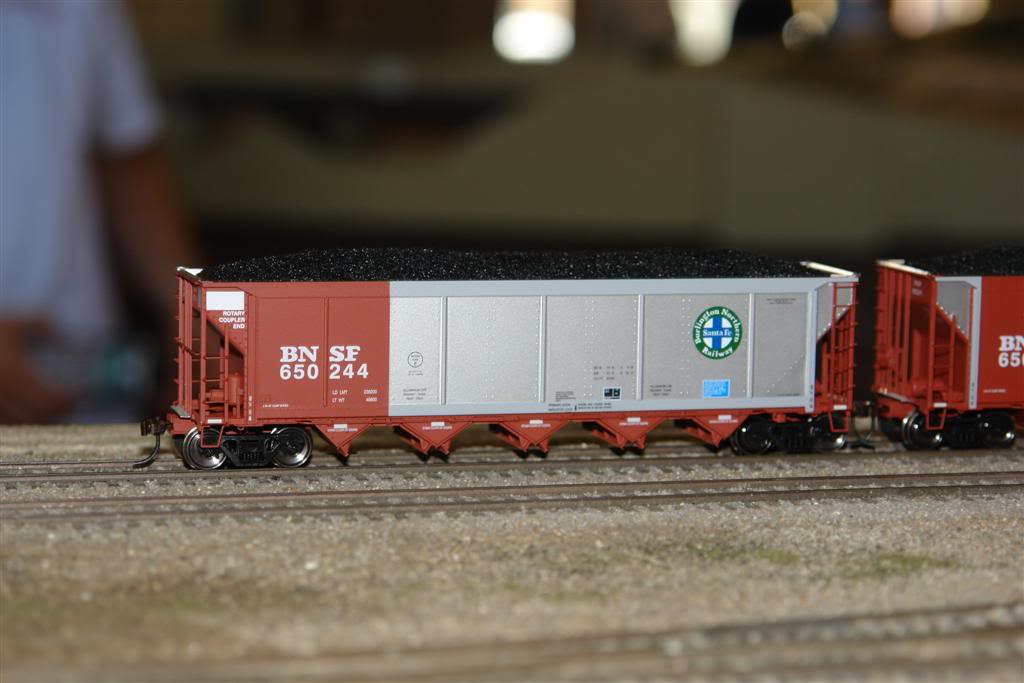 This bag, I found at Wal-Mart during Chritsmas season. It's a small bag, not much but 4"x4"x2" but, it's perfect with my train stuff! 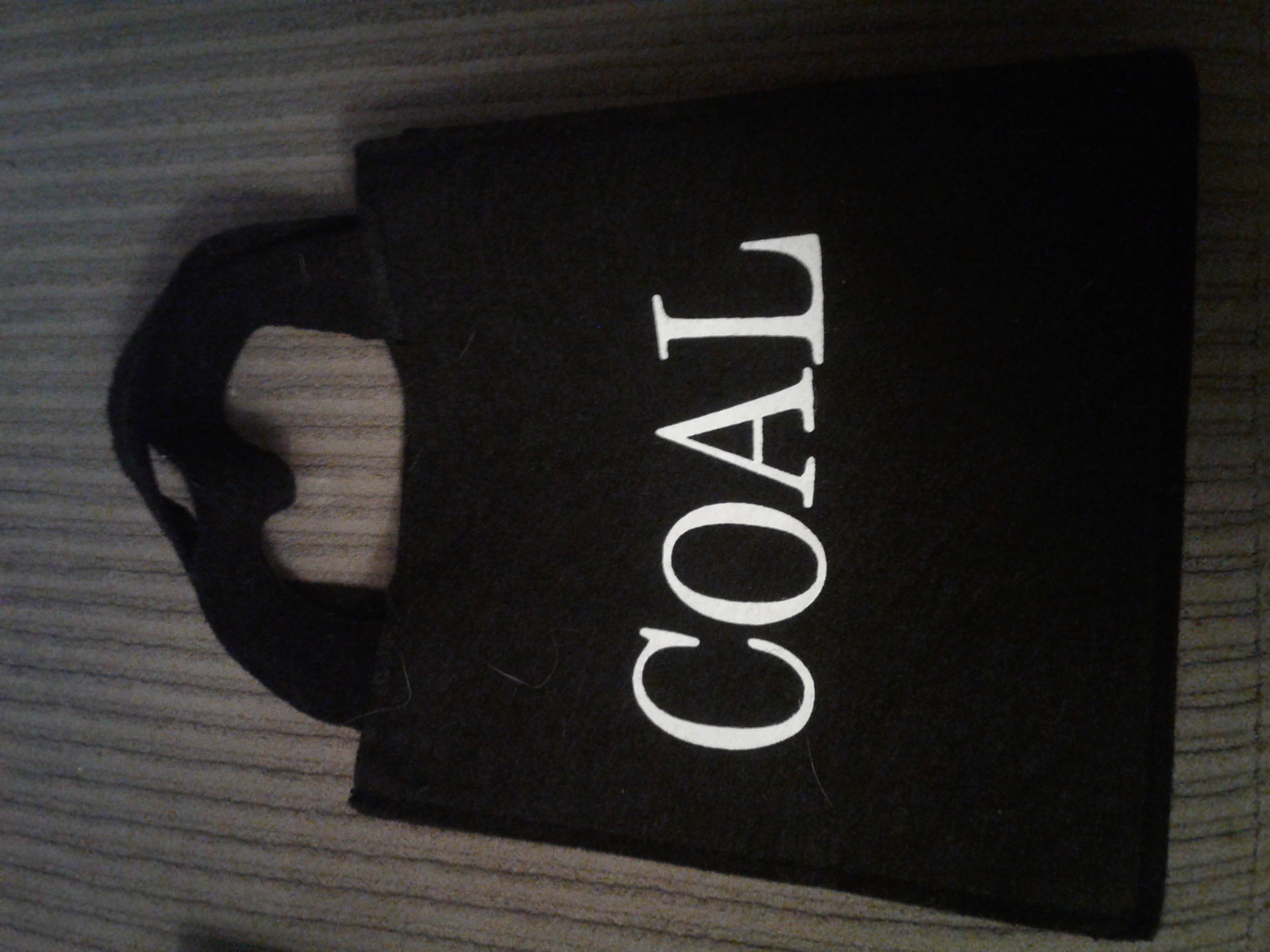 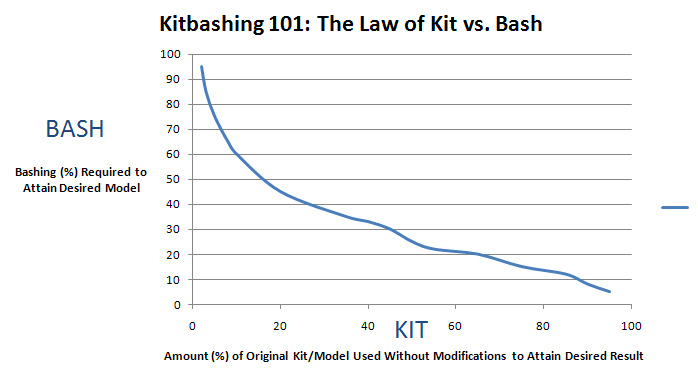 Rival Rails tells the story of the American railroad dream, connecting the coasts with ribbons of steel. Borneman tells the story of several railroads and their quest to build a transcontinental line from the first line built by the Central Pacific and Union Pacific, to the later, and more southerly Southern Pacific and Atchison, Topeka & Santa Fe routes. Though very well written, and thoroughly researched, the book left me wanting more (and less).

The title and subtitle lead you to believe the book would chronicle all of the major transcontinental railroad routes. The preface, however, is an indication to the later chapters of the book. In the preface’s first paragraph, it says “[A] better, shorter, less snowy route through the corridors of the American Southwest, linking Los Angeles to Chicago.”

The chapters of Part I summarize the Pacific Railroad Bill, the completion of the first transcontinental route, and ends with the introduction of the Atchison, Topeka, & Santa Fe; and the Denver, Rio Grande. Though briefly, it does hint at the way the Central Pacific and Union Pacific succeeded by way of land grants, made false land surveys.

A guide to what road numbers Athearn has released 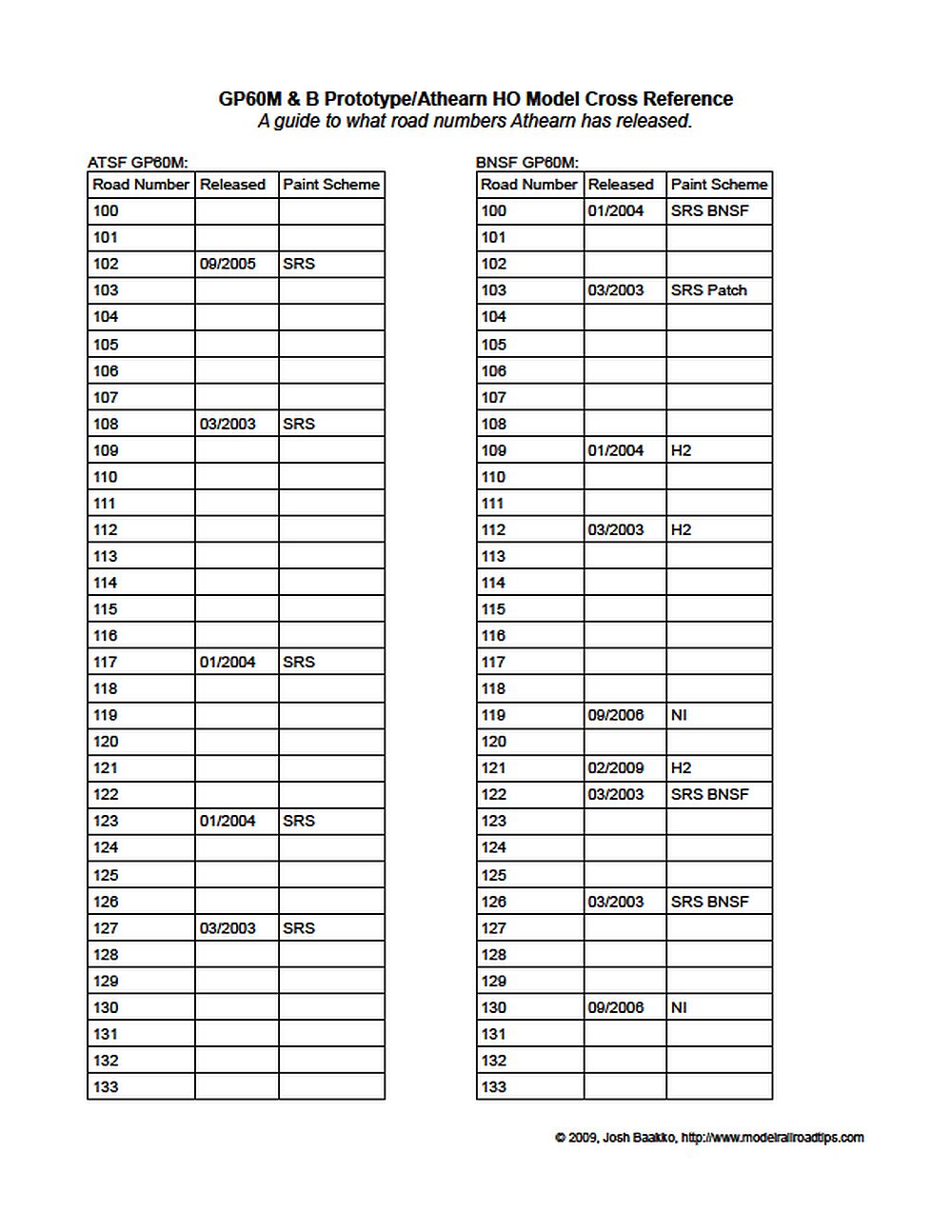 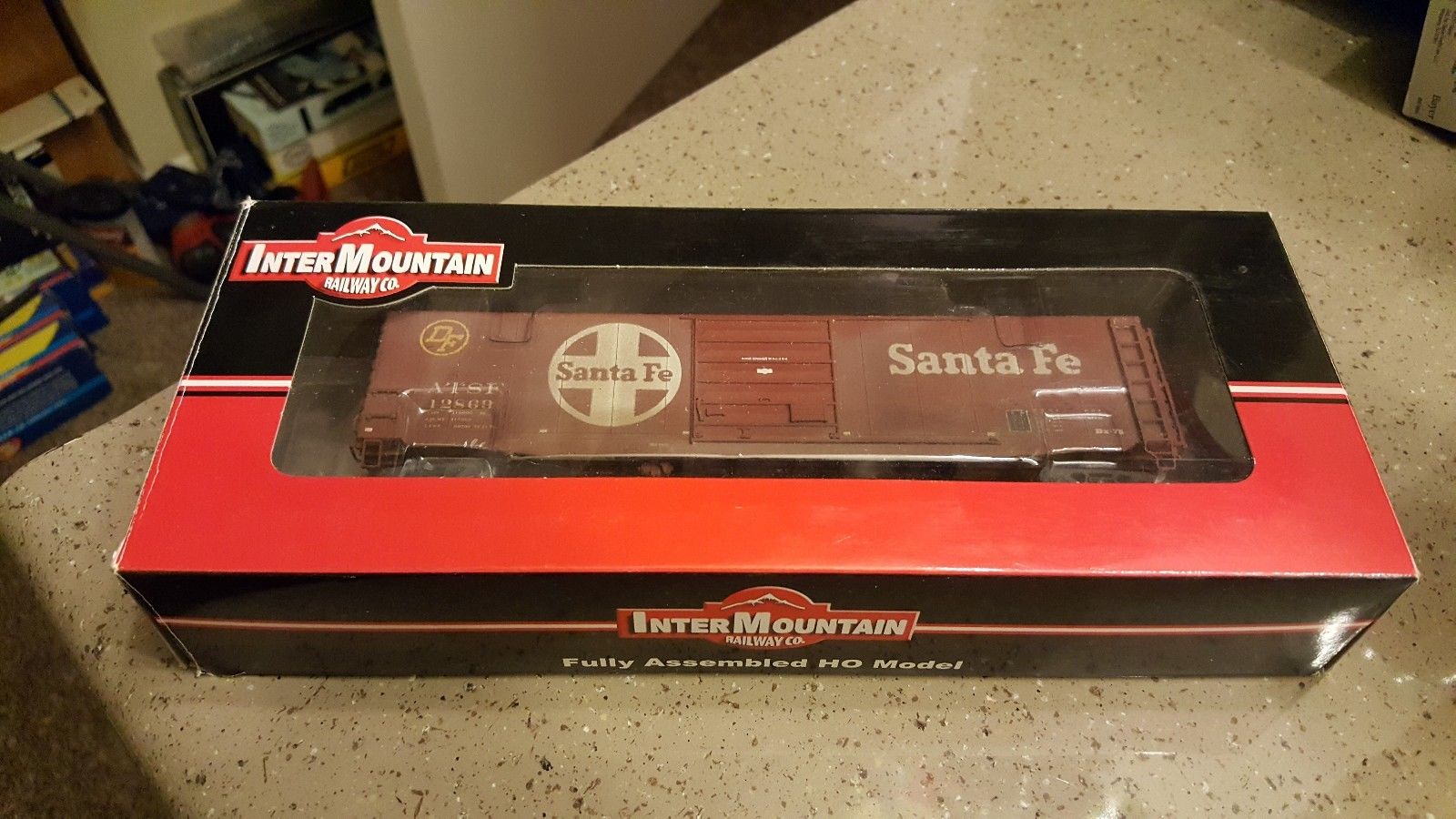 This car is weathered based upon similar PS-1 boxcars in the Santa Fe fleet in the early 1980's. One particular photo on RRPictureArchives.net from 1982 of ATSF 12764 inspired this HO scale replica numbered 12863.

This Intermountain RTR boxcar comes factory equipped with Kadee couplers and Accurail trucks, however the trucks were friction bearing, so I replaced them with a set of 70 ton roller bearing, also from Accurail which are appropriate for the era modeled (early 1980's).

Don't miss a chance for a freight car with a one of a kind chipped roof exposing the galvanized steel roof under Santa Fe's paint job.

Asking $55, buy it now below the images! 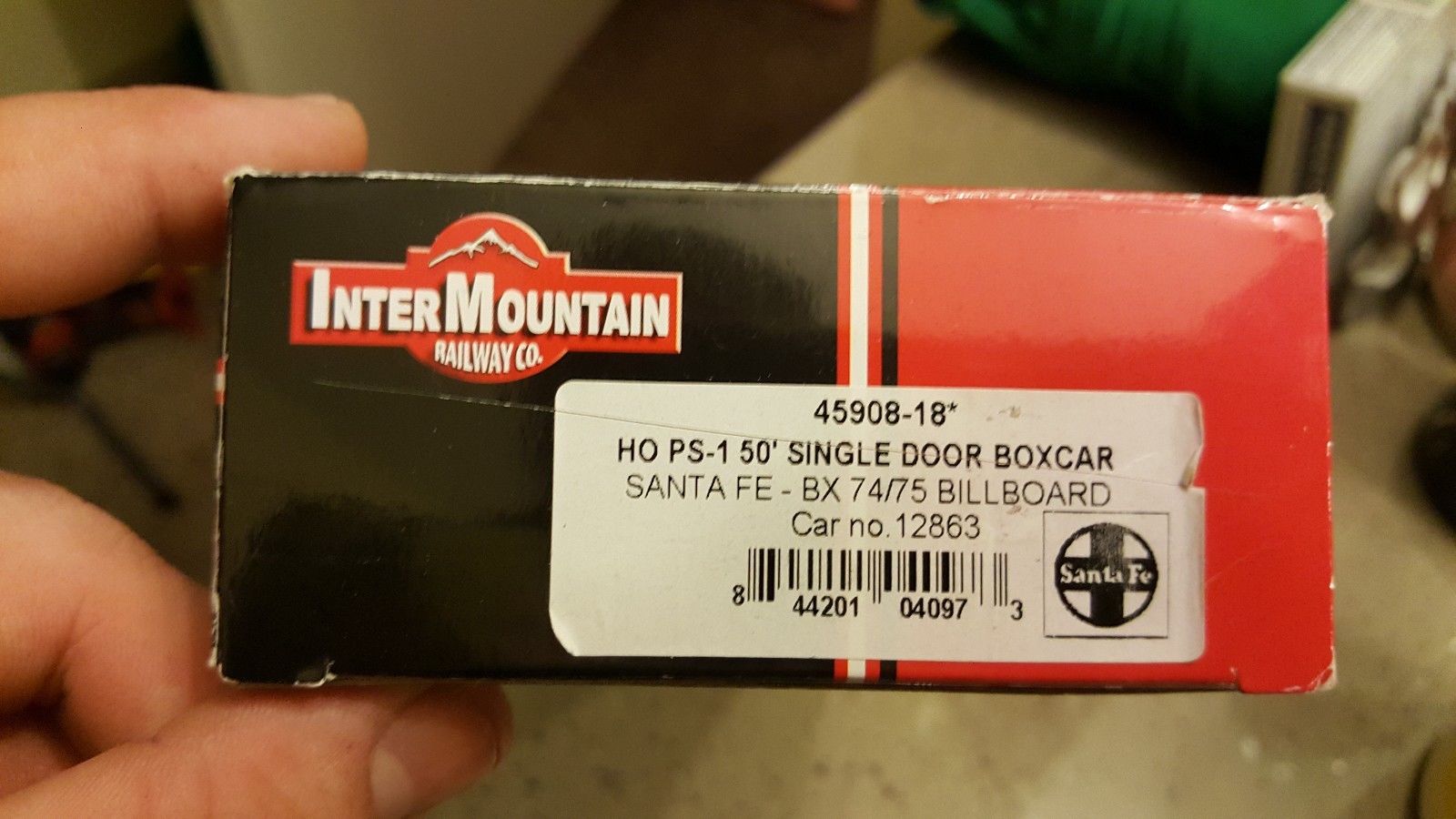 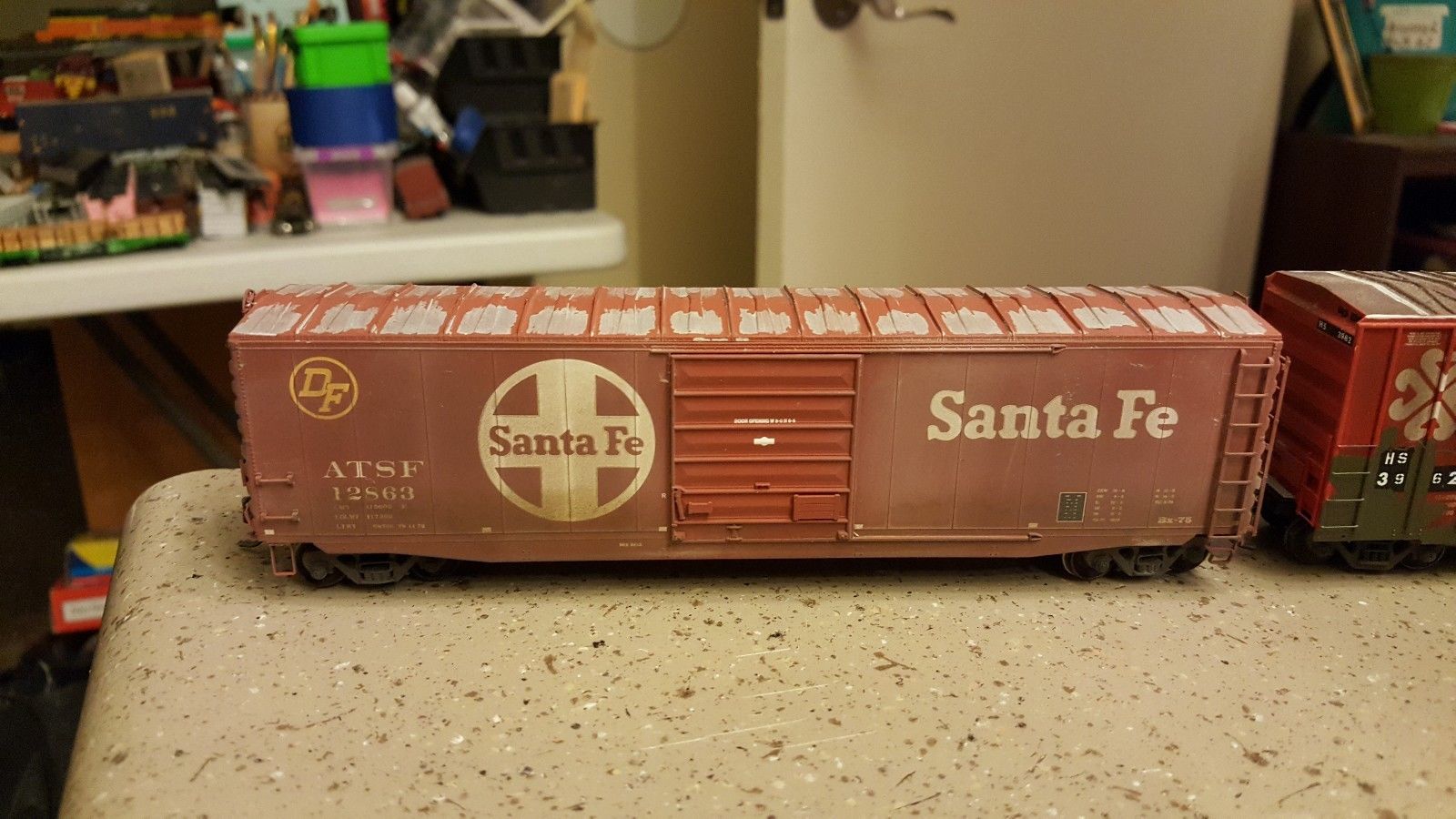 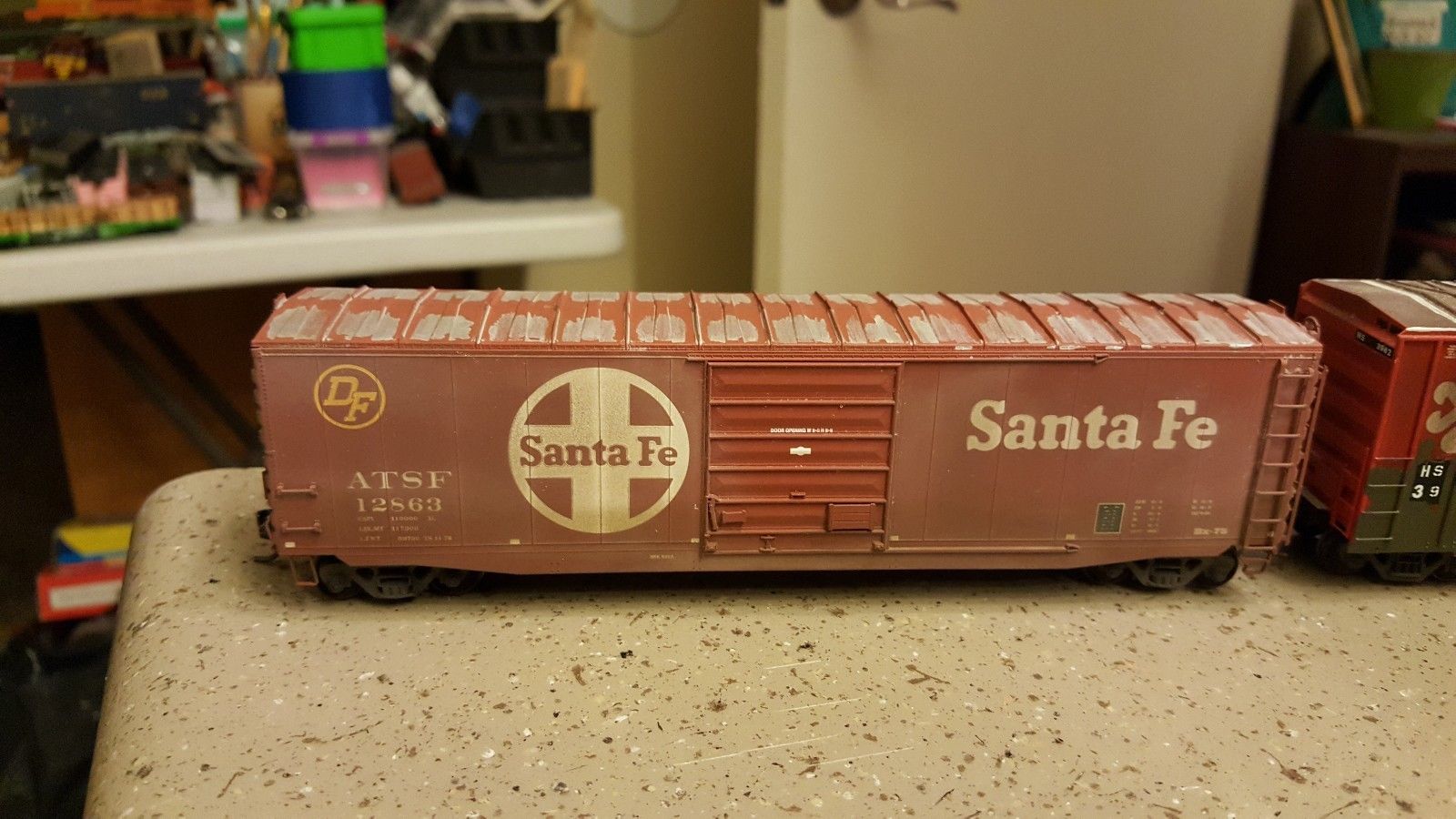 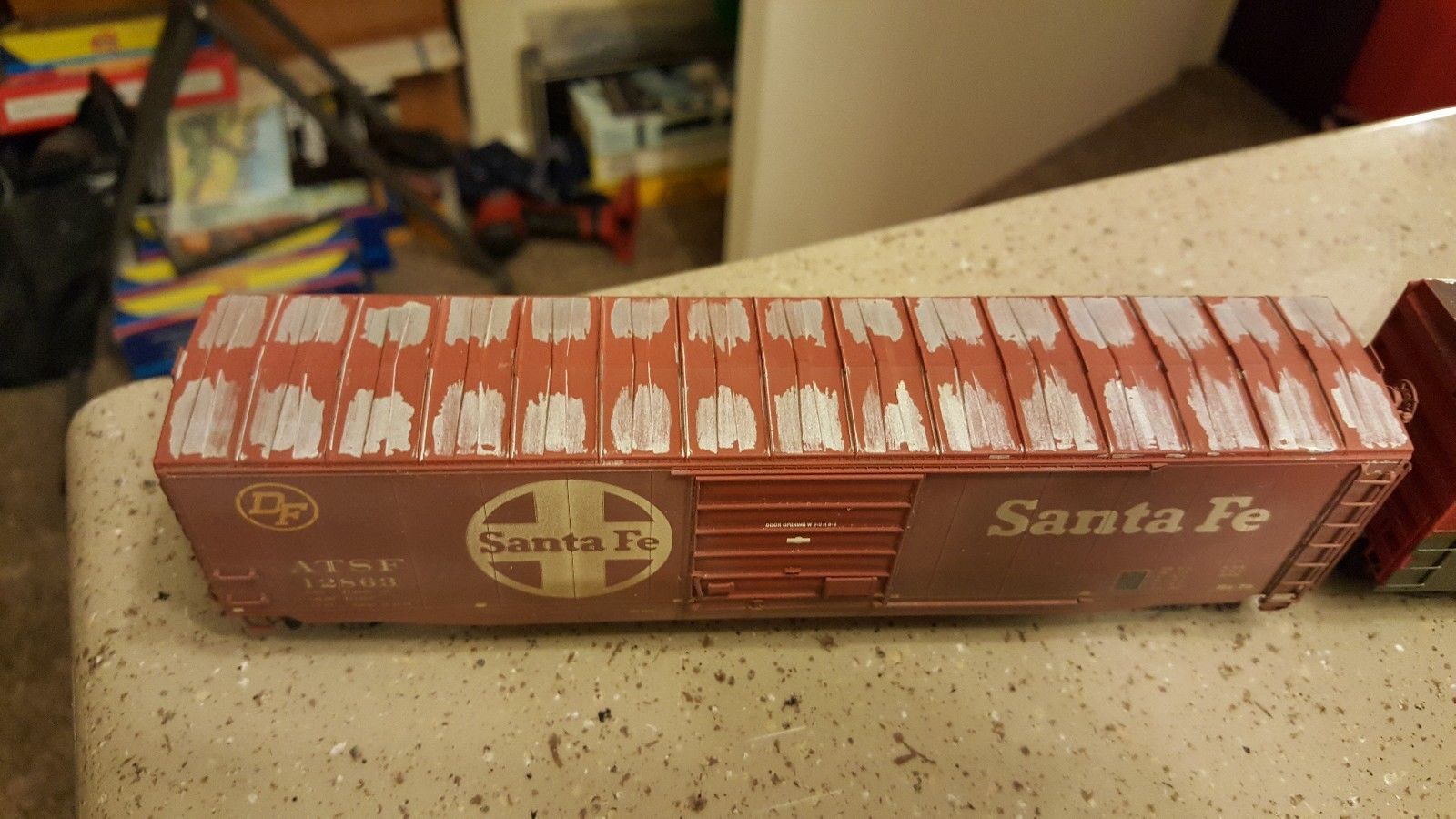 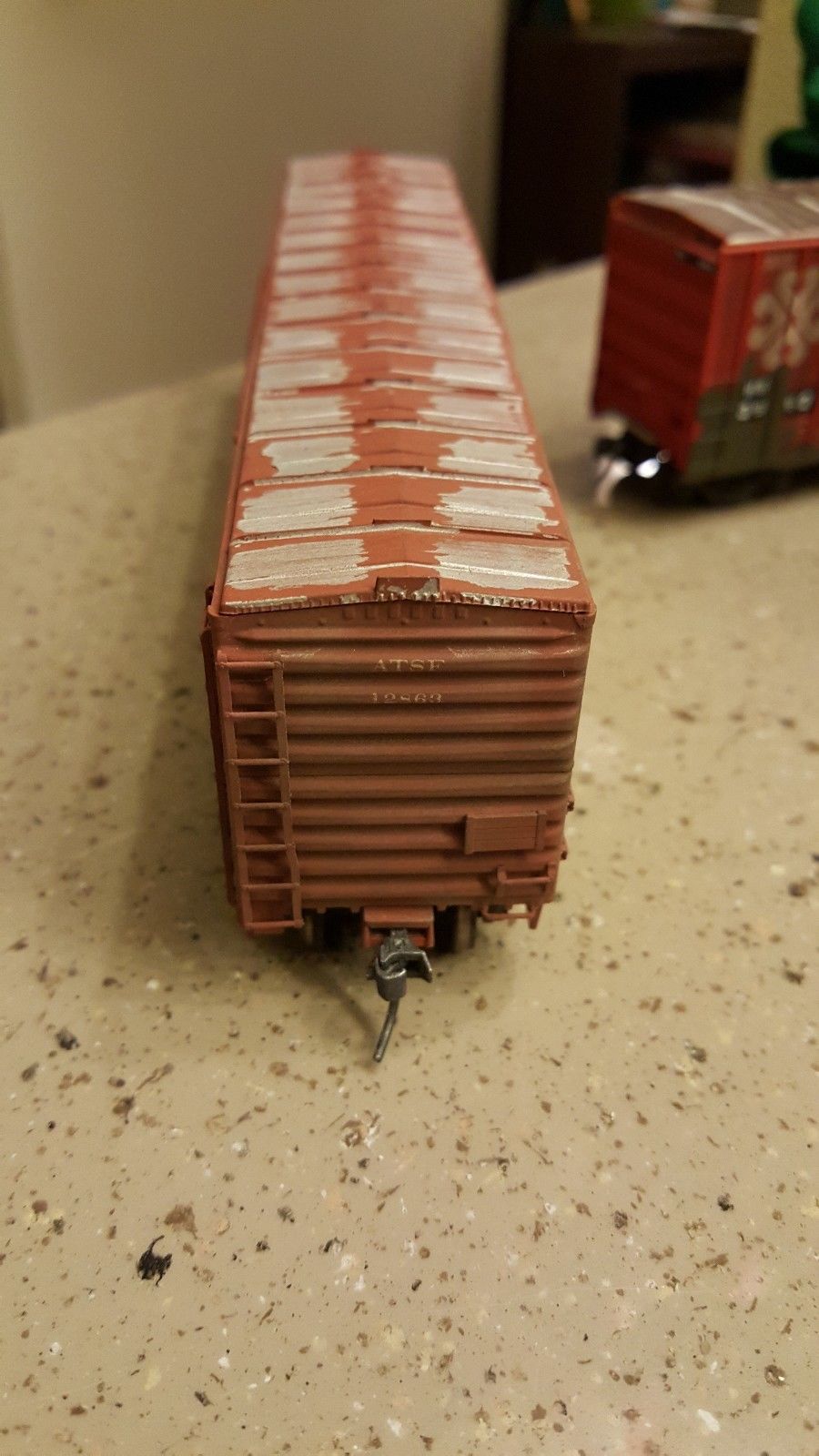 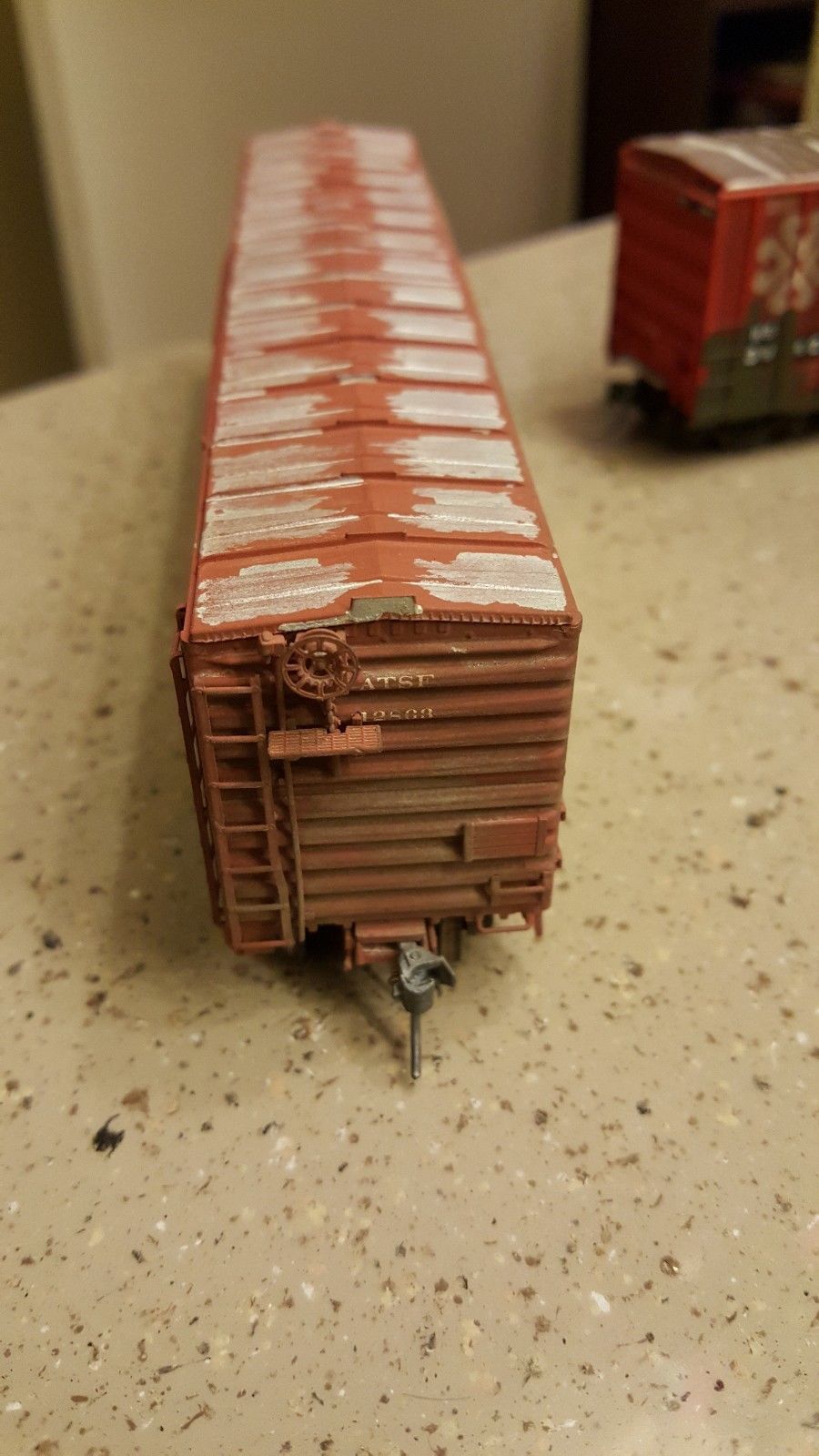 Relics of My Youth

Relics of My Youth

The summer of 2018 I visited my home town of Hancock MI, here's some relics of my youth.

It was a somber time.  My dad ended up in the hospital the week prior to us leaving San Diego.  He was transferred to a nursing home where we visited with him, and he was able to meet his grandchildren.  Our last day of our visit to Hancock/Houghton MI, my dad passed away, prompting me to seclude myself and get to driving home.

But while we were there, I was able to grab a few remaining model railroad relics from my youth.  I'll treasure these forever. 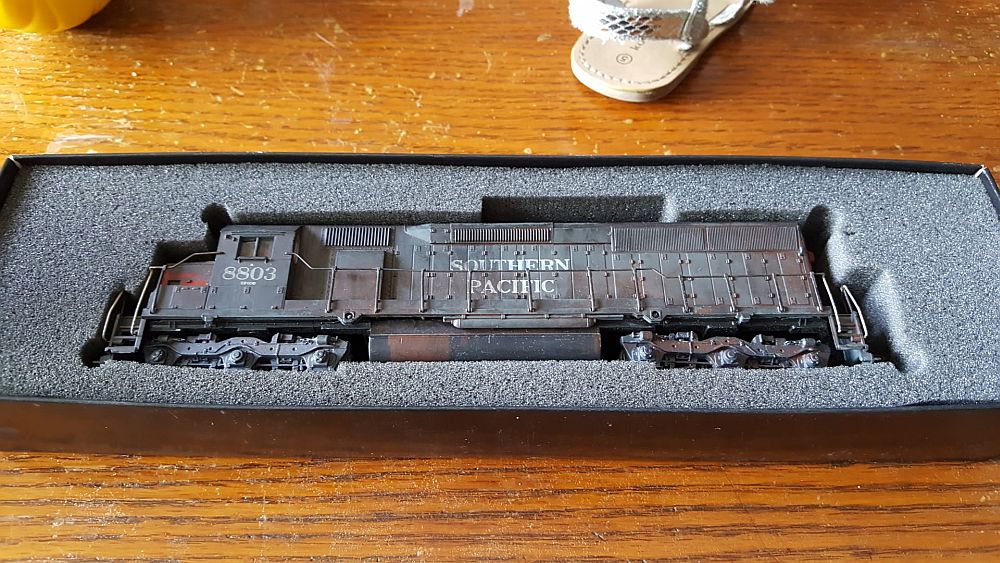 Read more: Relics of My Youth 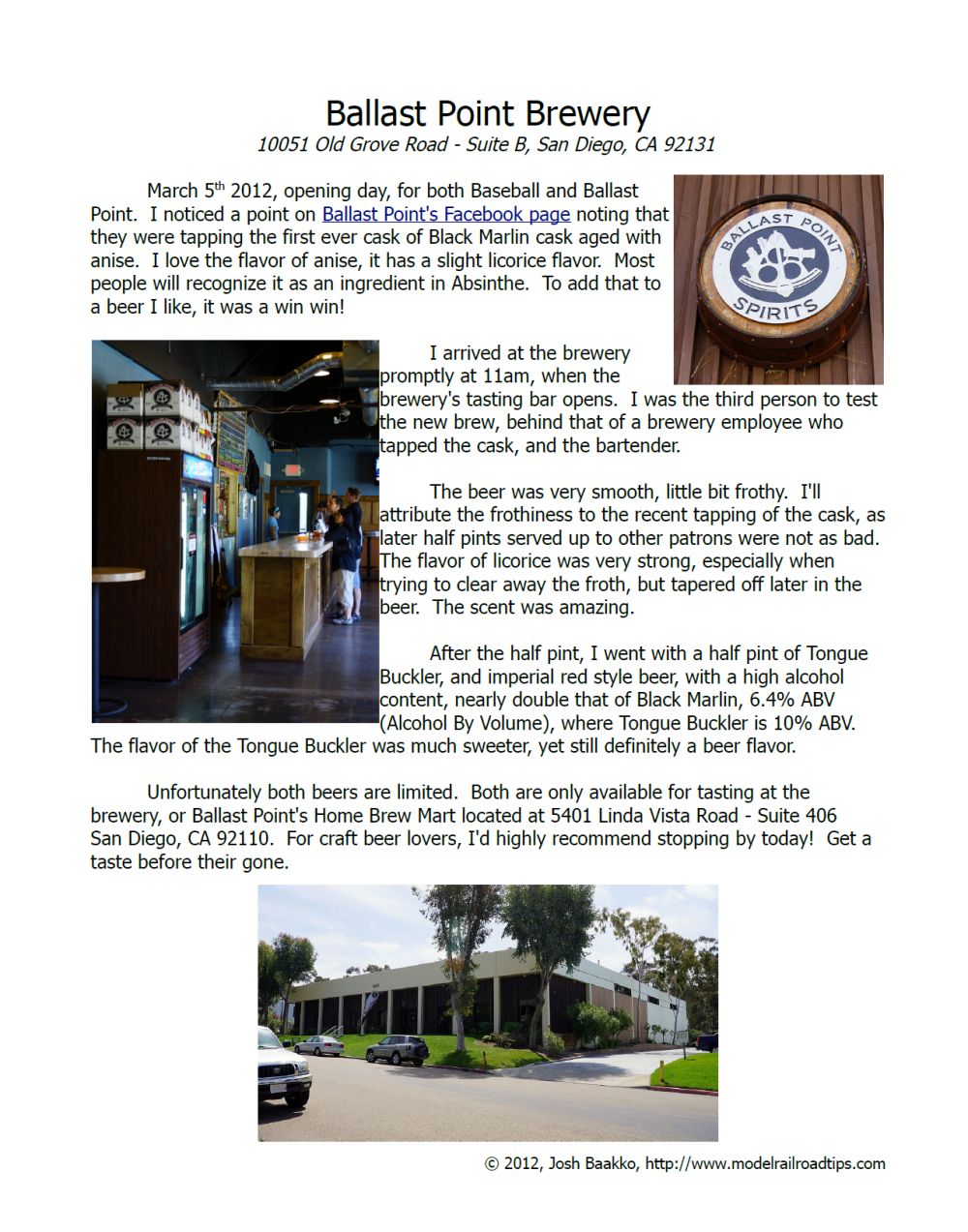