In January of 2019, 5 year old ScaleTrains.com announced their HO and N scale GE Dash 9 locomotives, in Rivet Counter and Operator Lines.  They had industry leading, In-Stock BNSF and Norfolk Southern models in Rivet Counter both Sound & DCC equipped, and DCC Ready.  I ordered one Sunday, a day after the announcement! 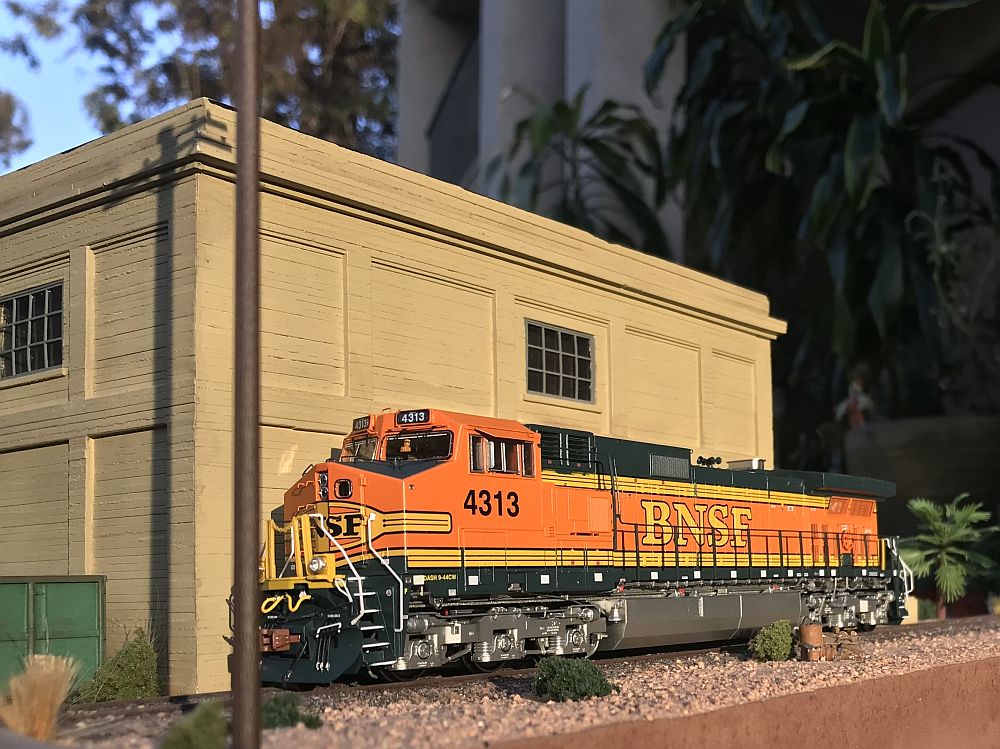 Seen here is BNSF 4313, As delivered Heritage II Dash 9, with DCC & LokSound V5.  This article is intended for you to familiarize yourself with the model in anticipation for the fast looming one month away. I will not review the sound capacities here, you can visit their YouTube for that. 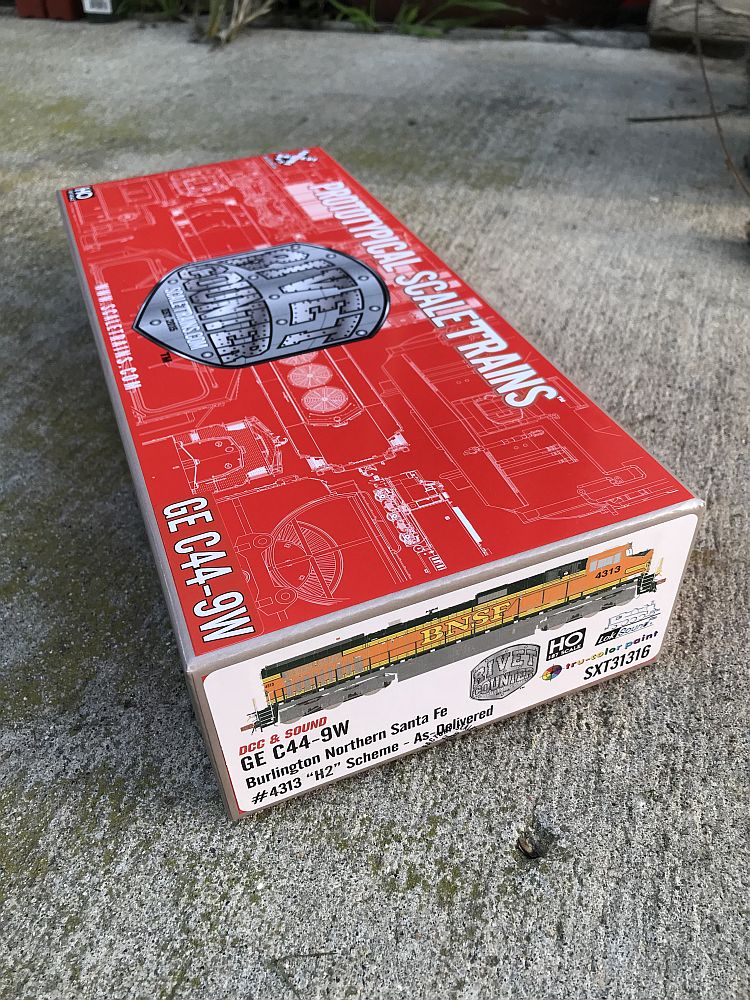 This Dash 9, along with ScaleTrains.com's other Rivet Counter releases come packing nicely in an attractive red box with line art of some of their locomotives.  The plastic clam shell holds the unit securely, however one spare knuckle on the back pilot fell off of my model.  Fortunately it was not lost! 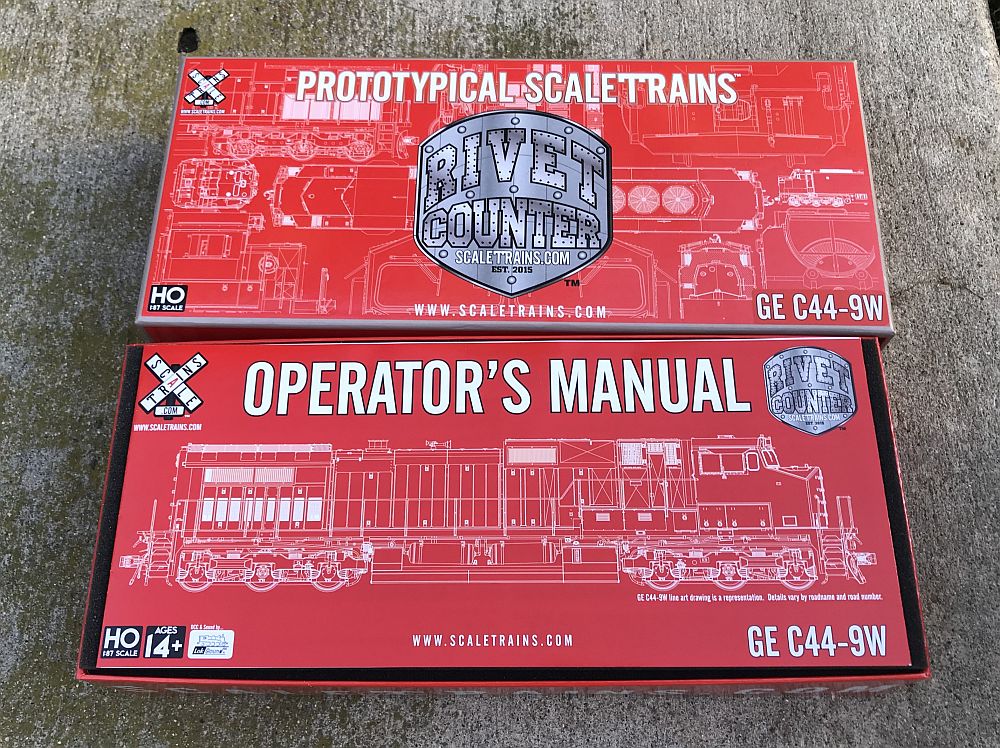 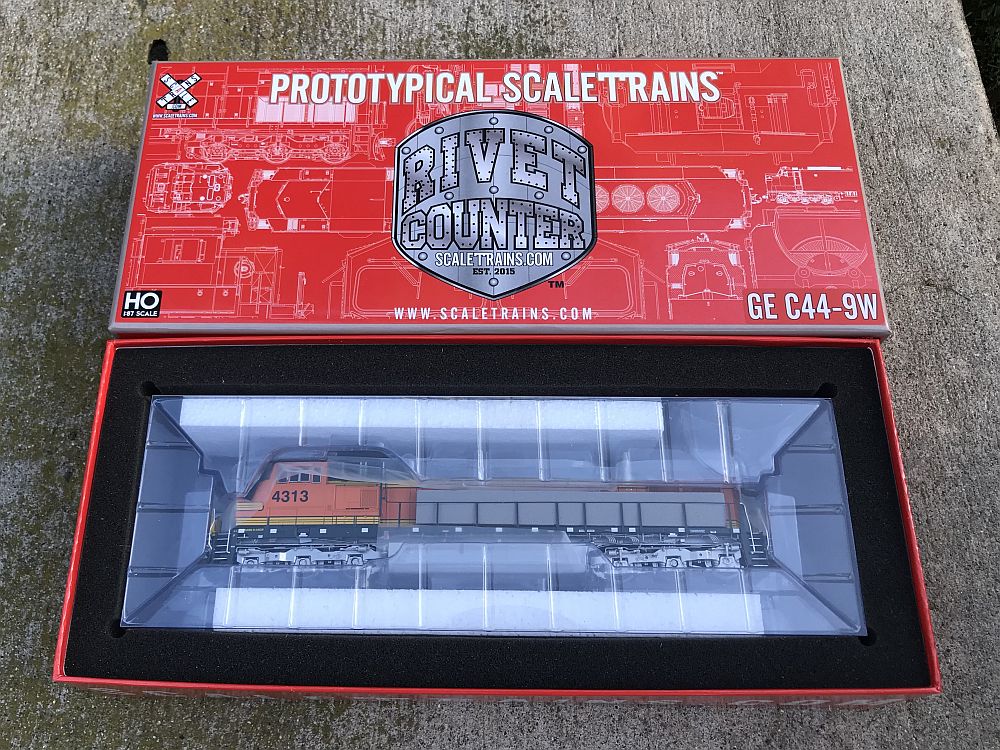 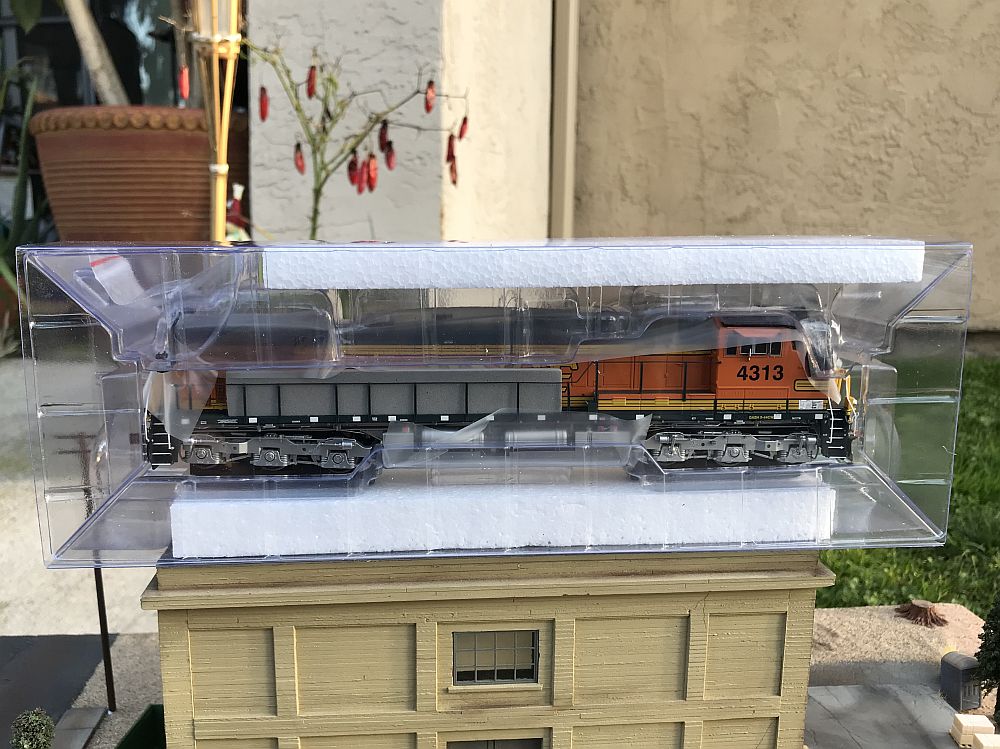 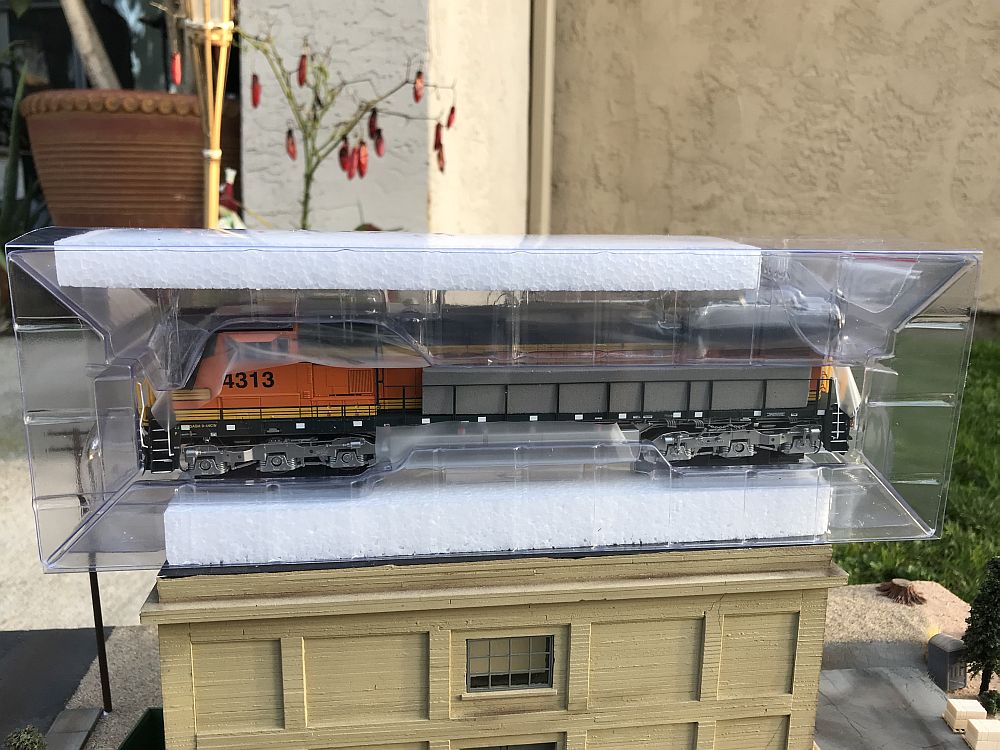 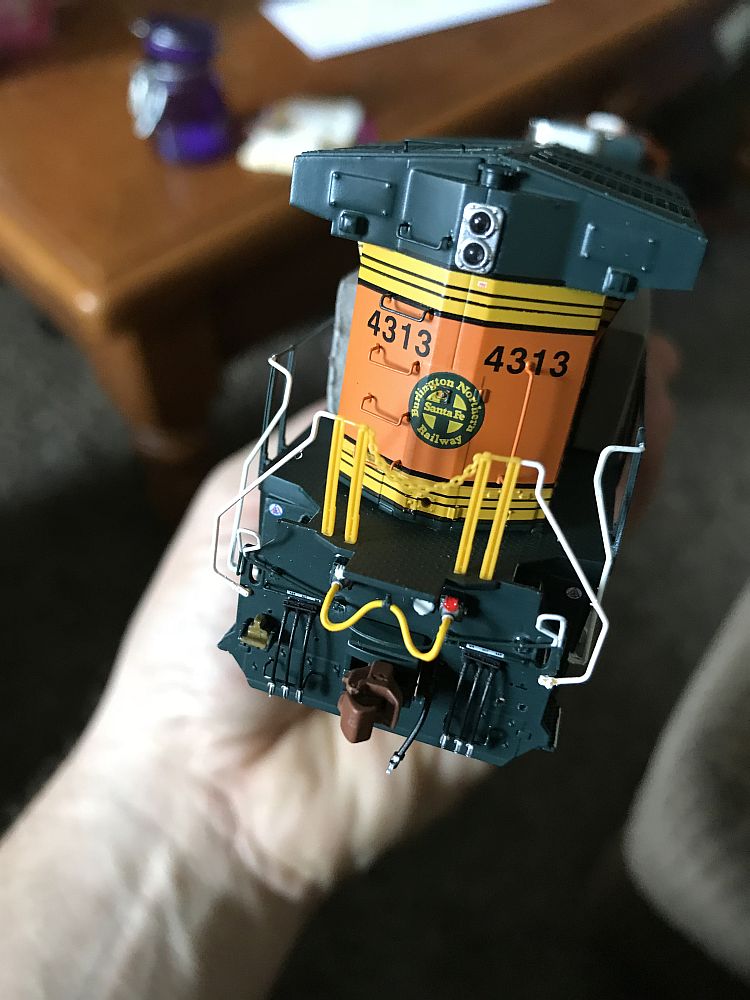 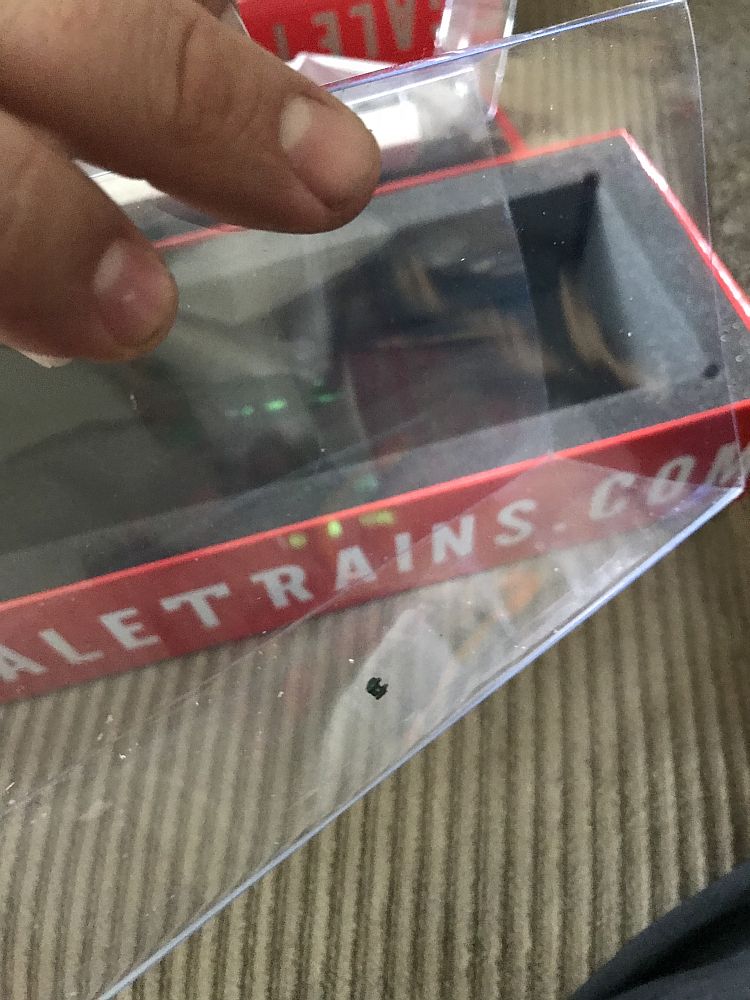 This was the only "loose" part on this HIGHLY detail, and accurate model, however some parts were dislodges and there were a few discrepancies as noted next.

On the Engineer's side radiator cabinet, two of the screens are dislodged: 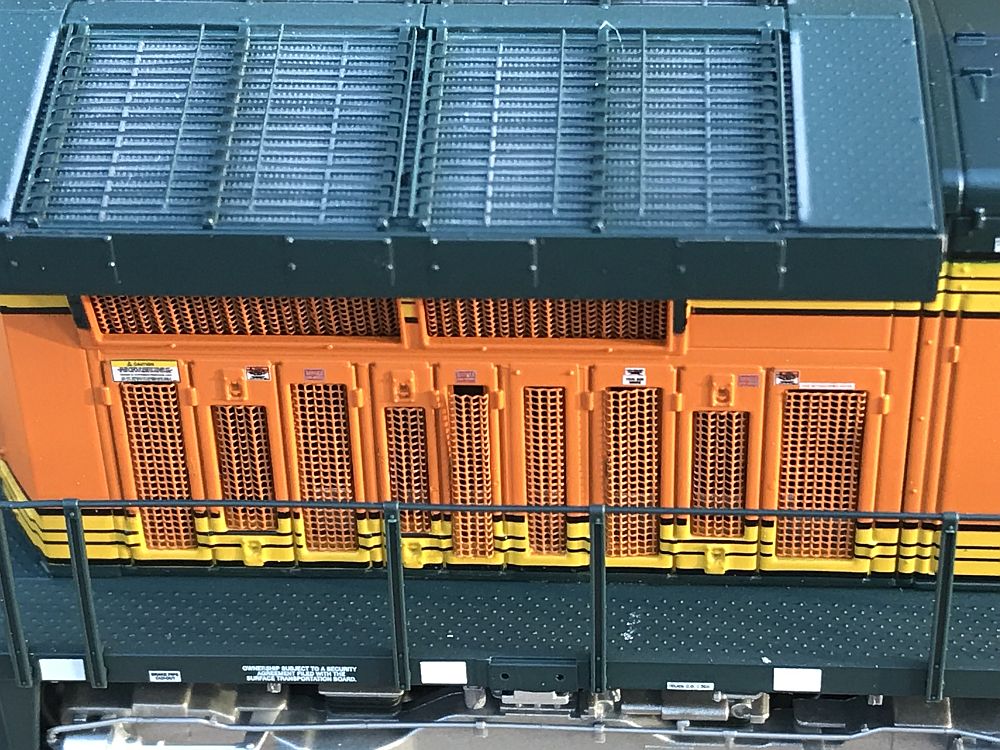 There is a small glue dot above the emergency fuel cutoff switch on the conductors side: 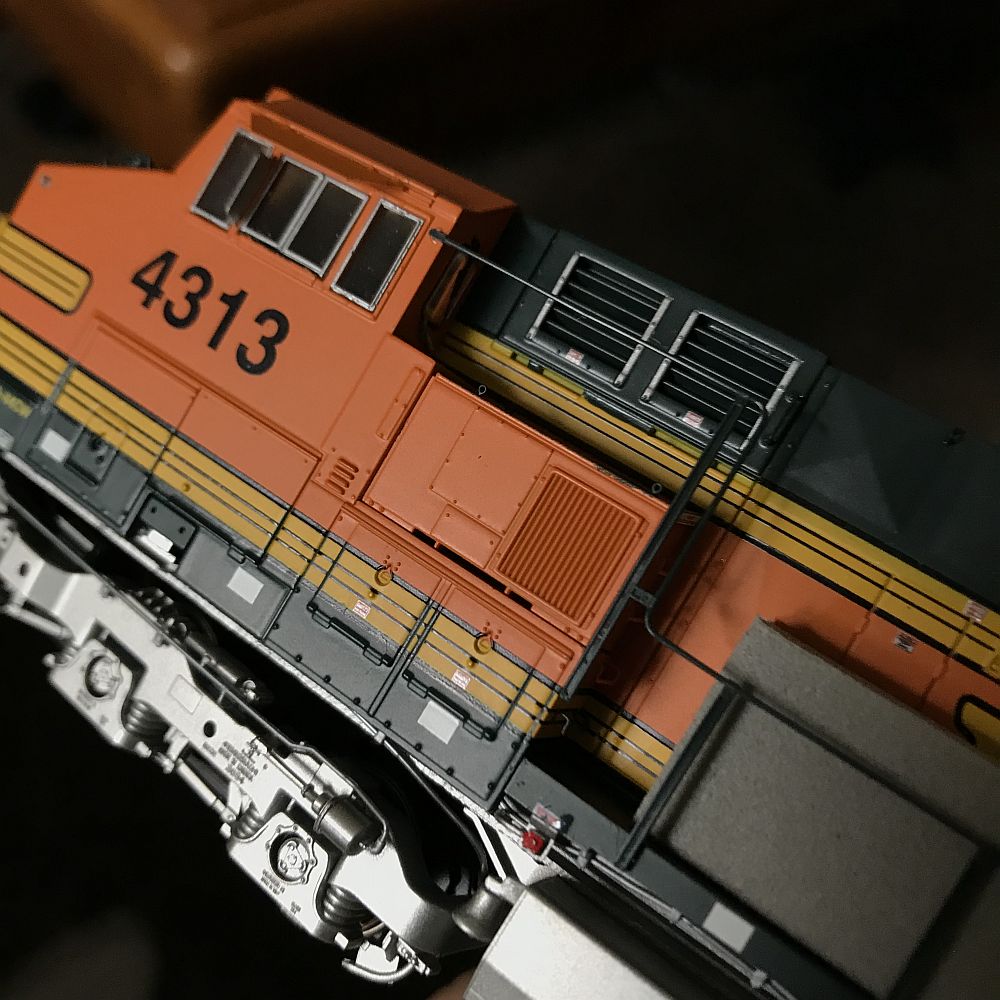 There is a plastic shaving stuck to the rear of the cab on the conductors side: 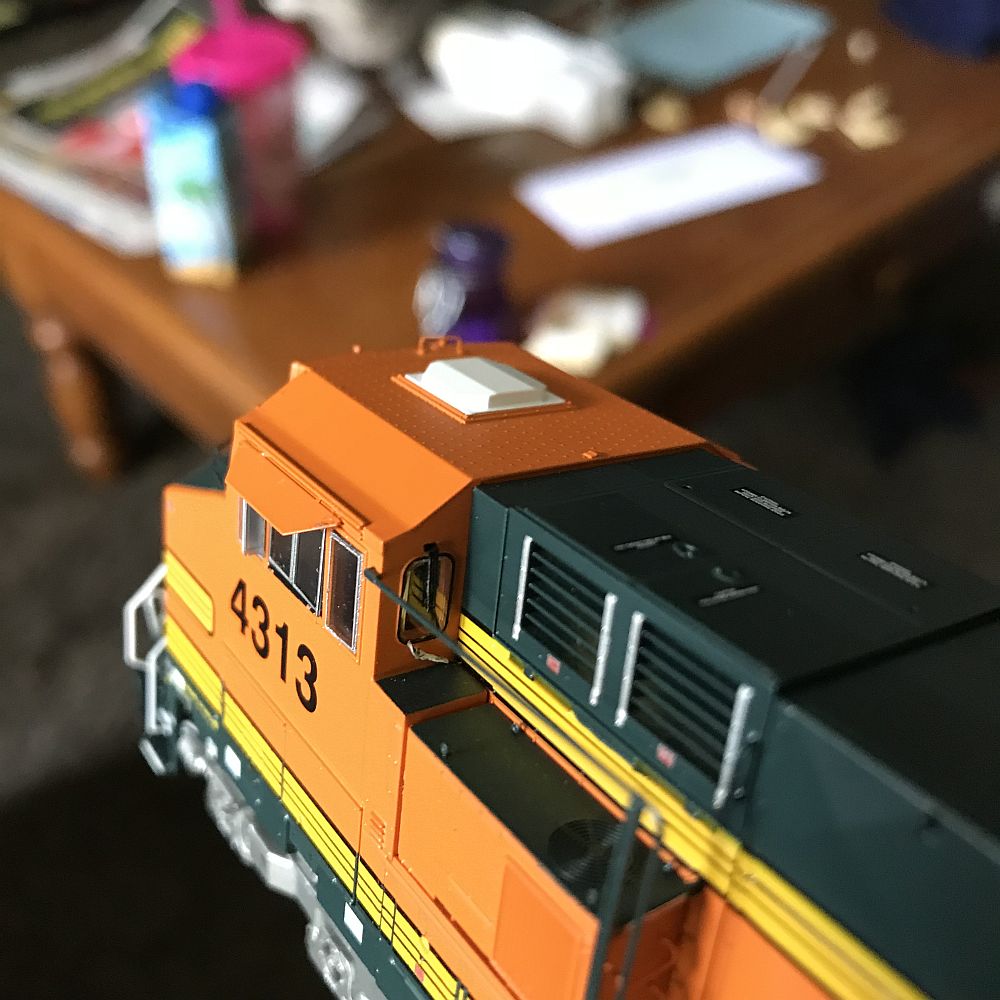 There is a slight dislodged, or misplaced look to the back side of the desktop control stands.  I have not opened the unit up to determine if it was made this way or something is dislodged. 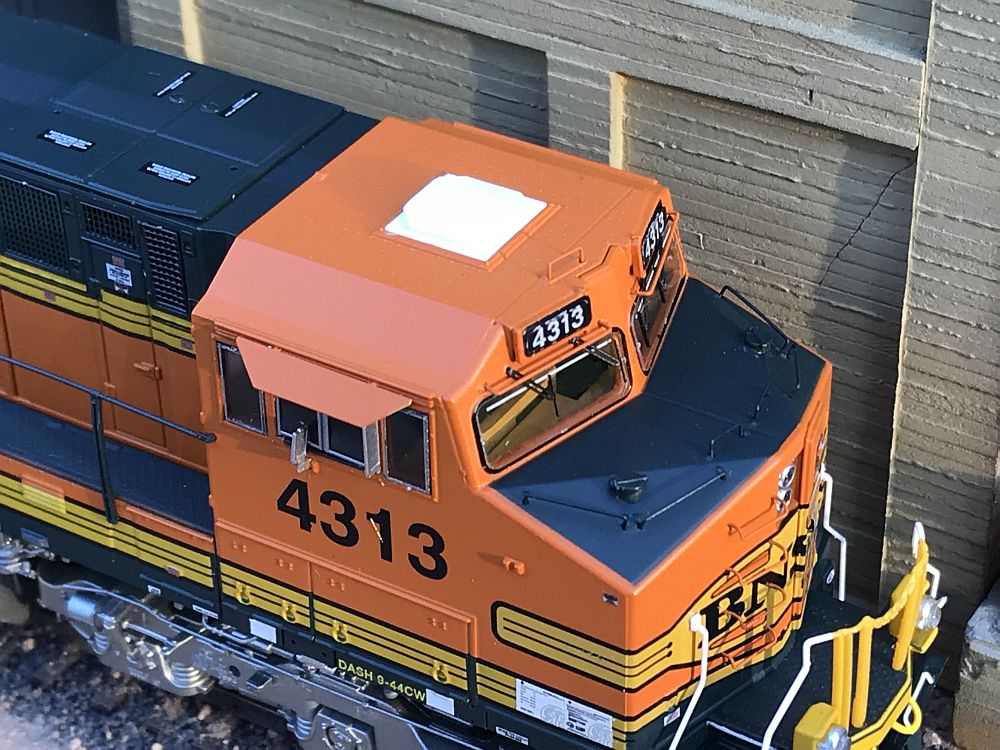 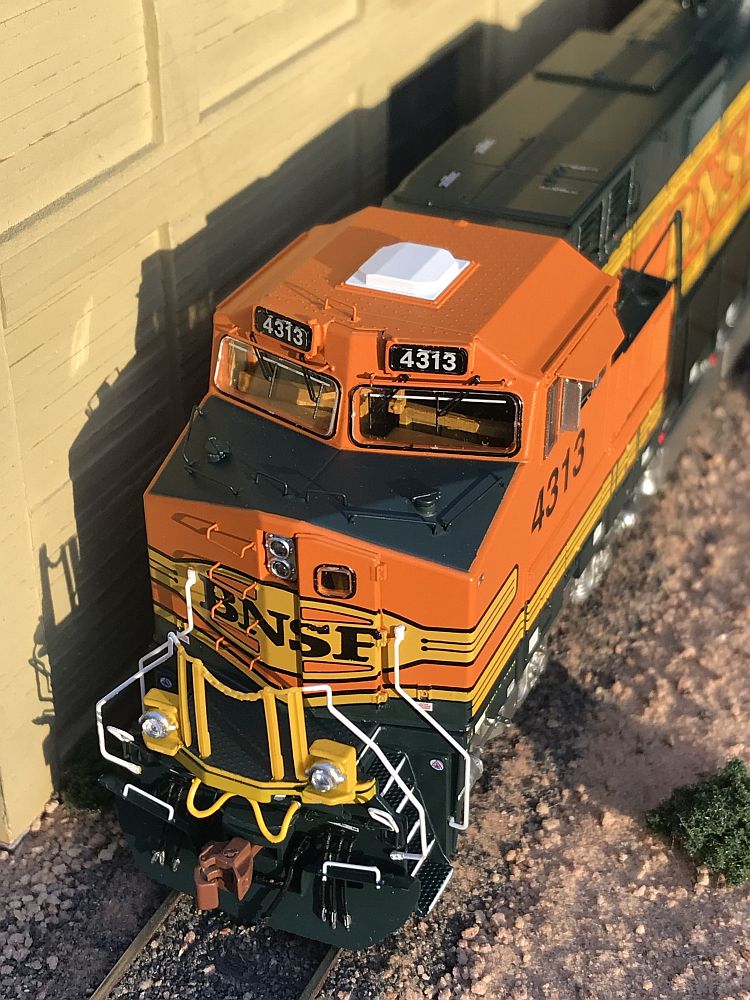 The rear truck traction motor cables have a loose look to them, I'm not and expert by no means, but I feel they should be tied closer to the frame rail above the truck. 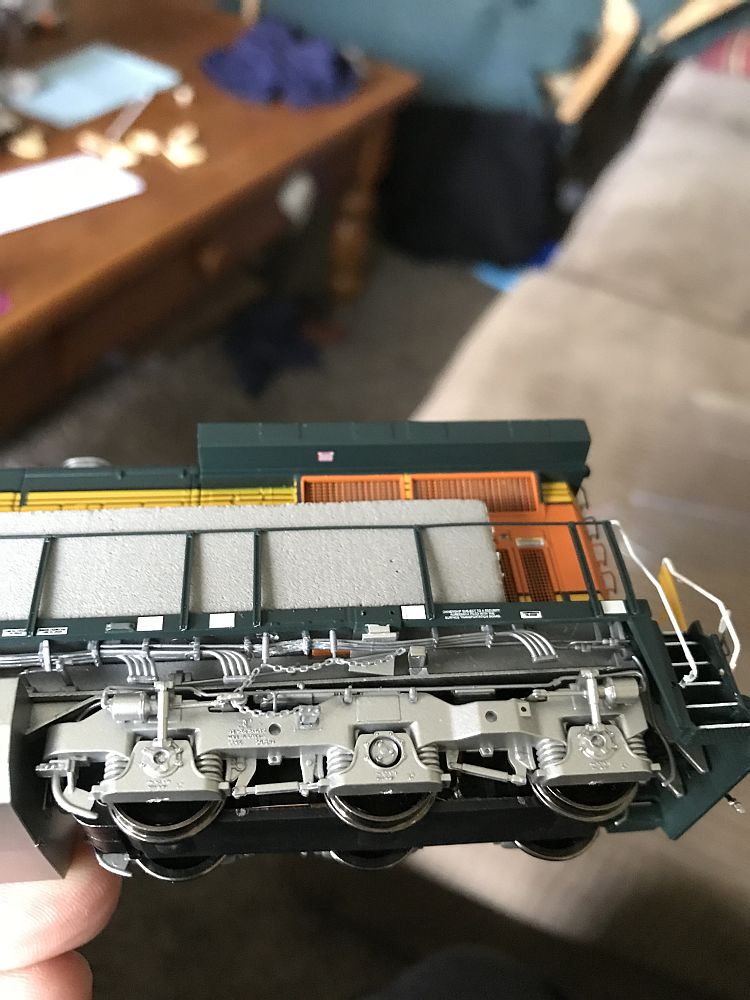 There is also one bent handrail station, the first on on the main deck behind the engineer's side of the cab.  It is not picture here in close up.

In all these discrepancies can be attributed to the "prototype" nature of this run, the exactness and scale side of the details, and the company's drive to accurately model the prototype.  Some more photos follow for you to feast your eyes upon. 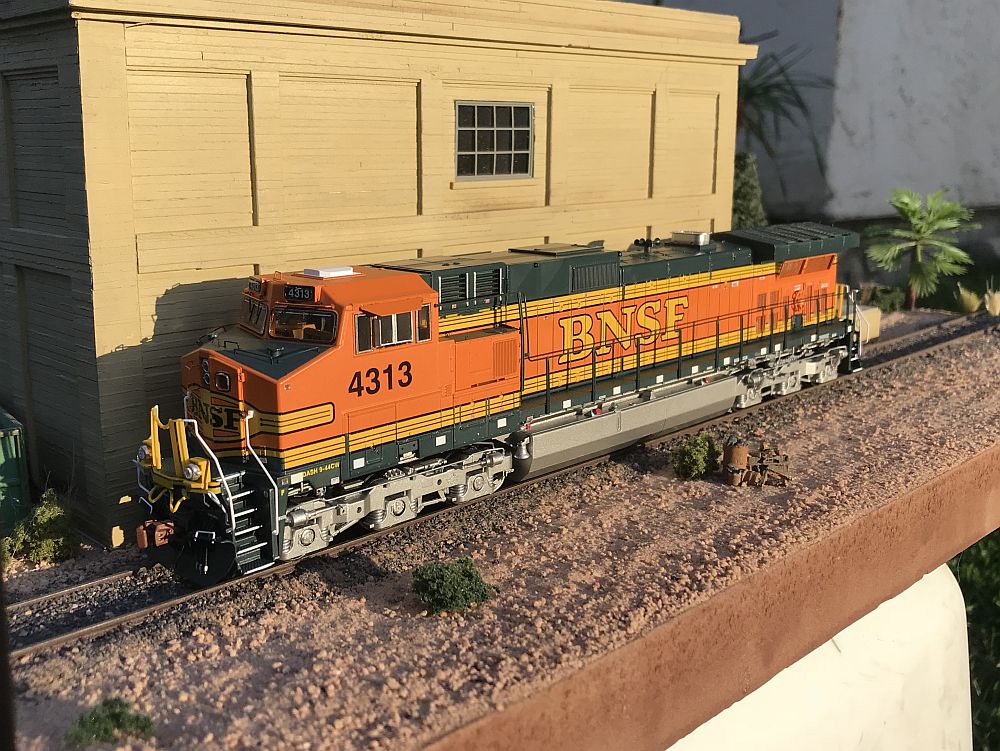 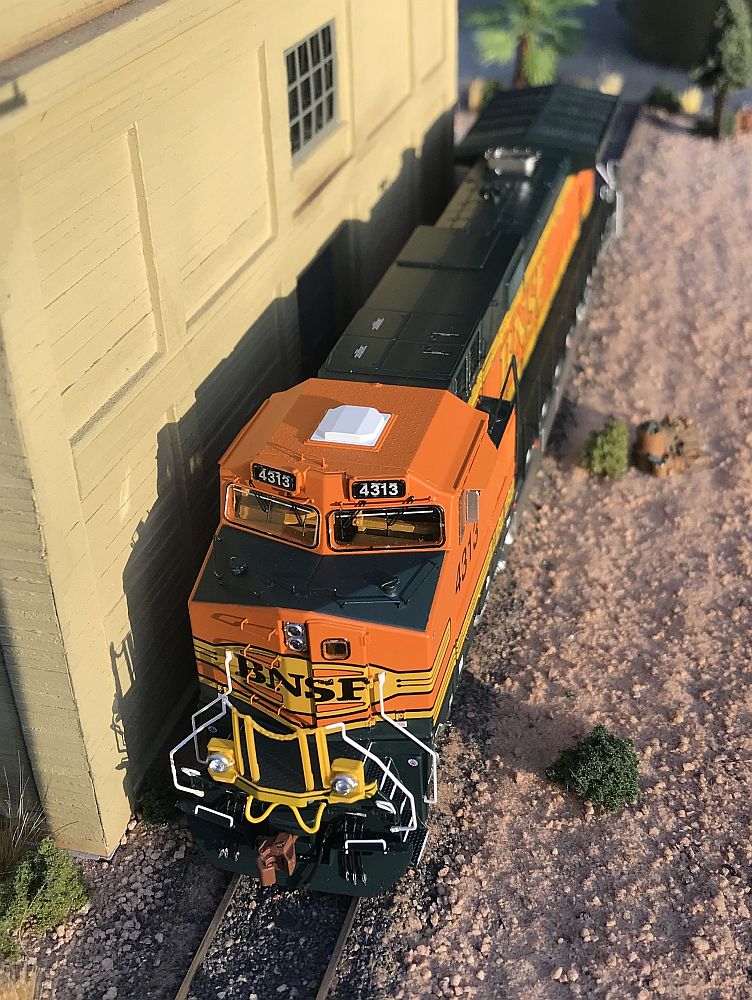 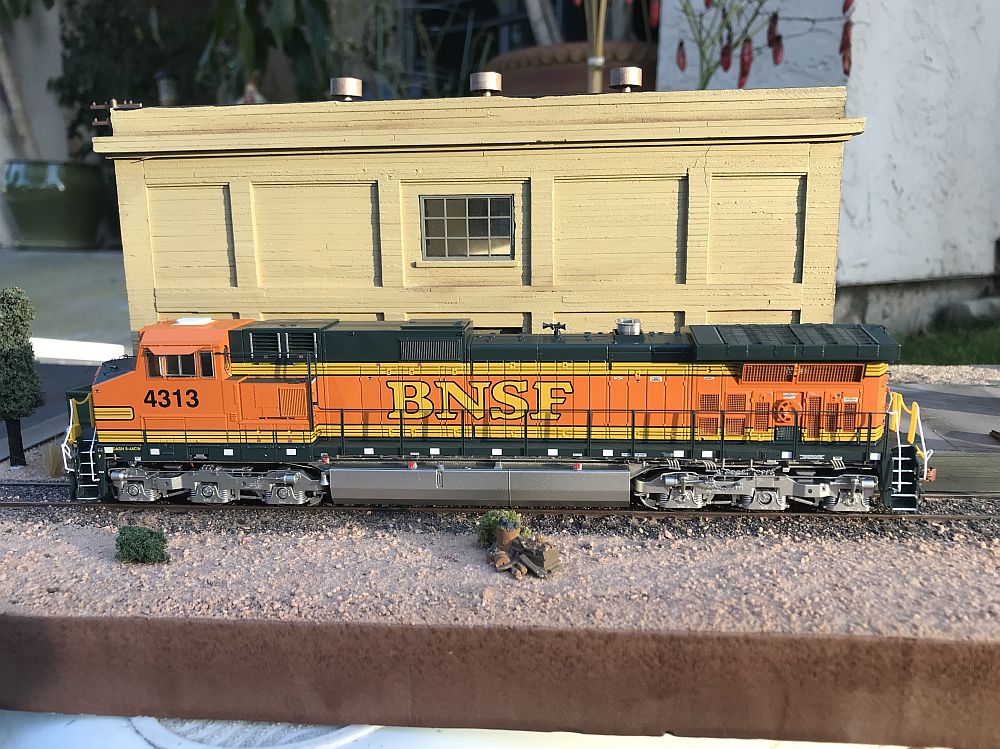 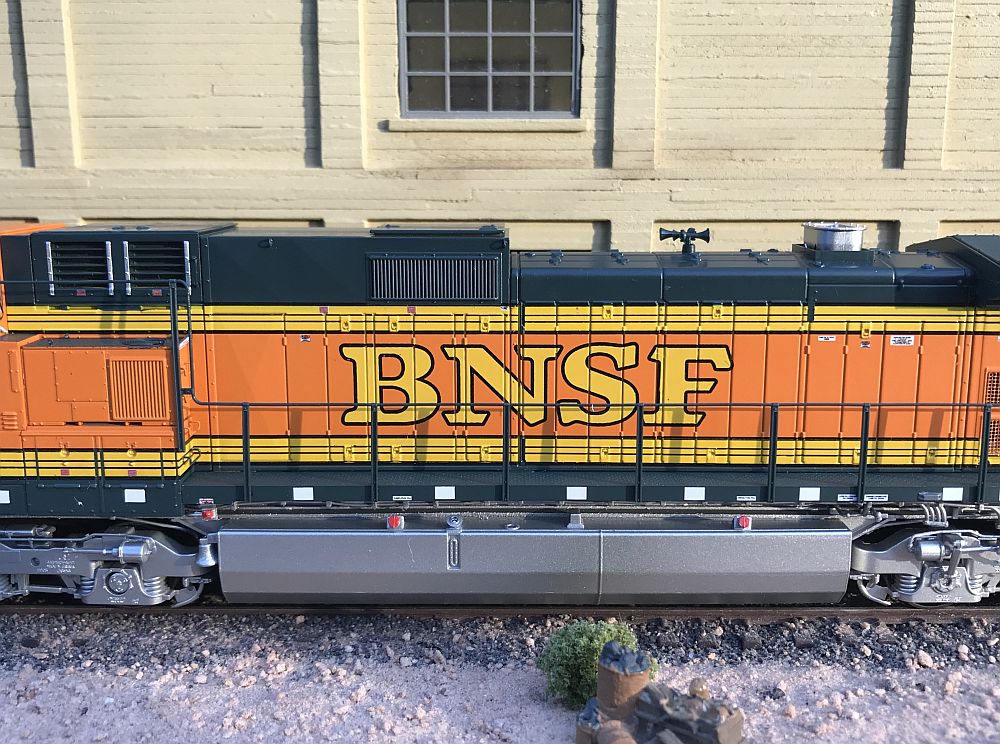 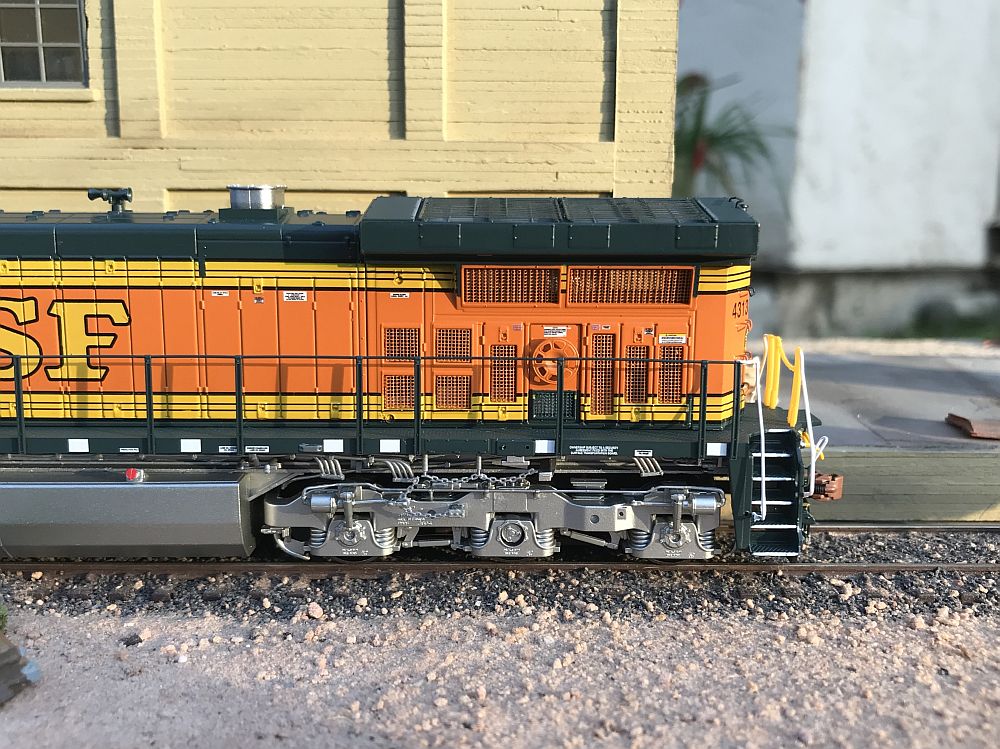 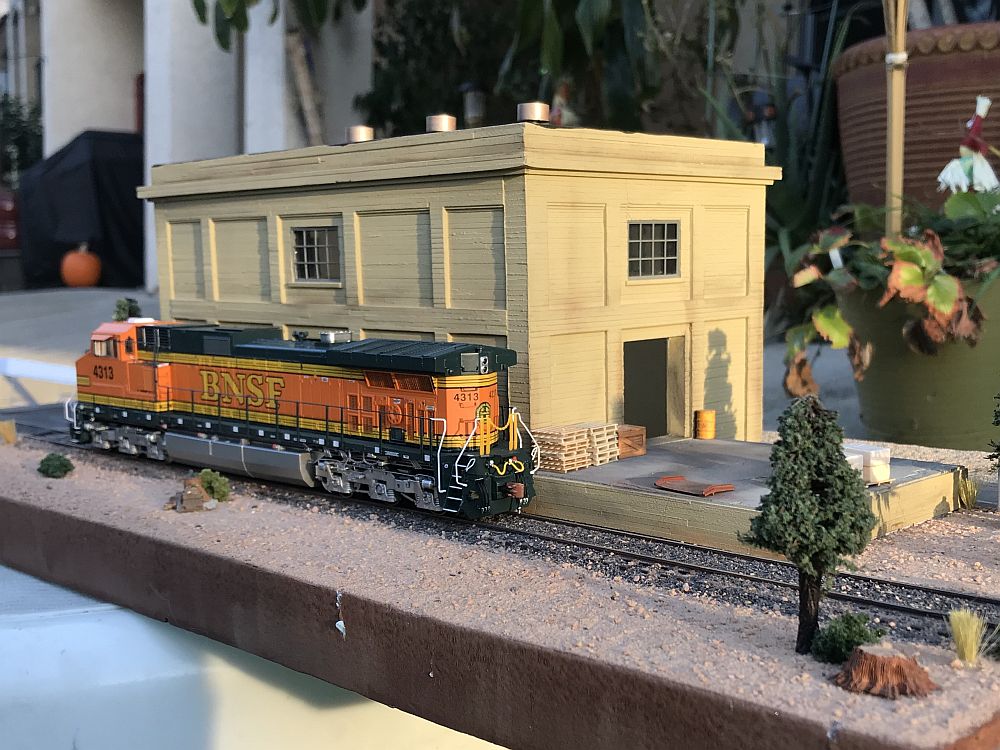 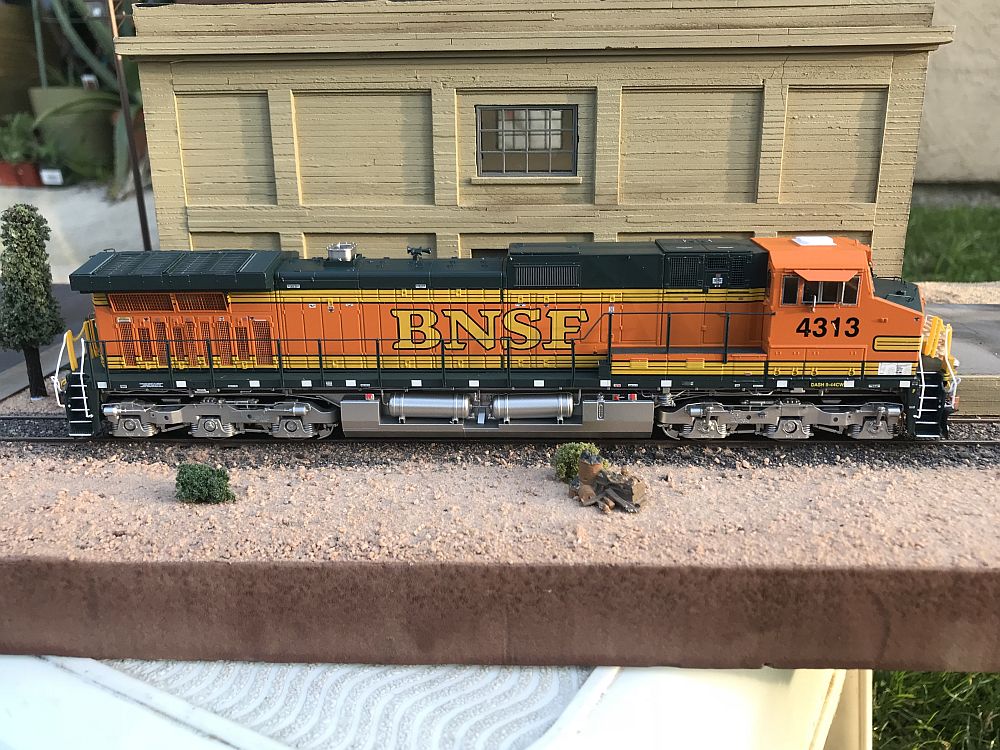 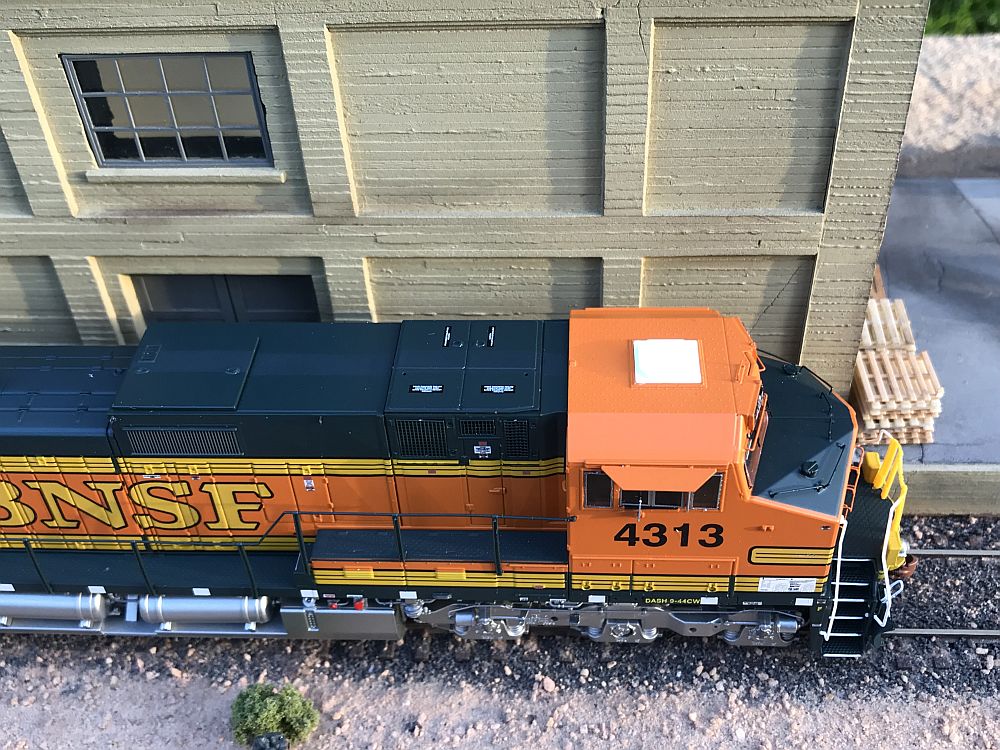 The only major detailing error, noted by close friend, and fellow GE Dash 9 fan Rob (@rusted_rails on Instagram, and rusted_rails here), is the Cab Air Conditioning Unit does not match any photos found online of this particular unit.  In fact we really couldn't immediately identify a single H2 Dash 9 with this exact AC unit.  The grill is simply too large compared to photos found online. 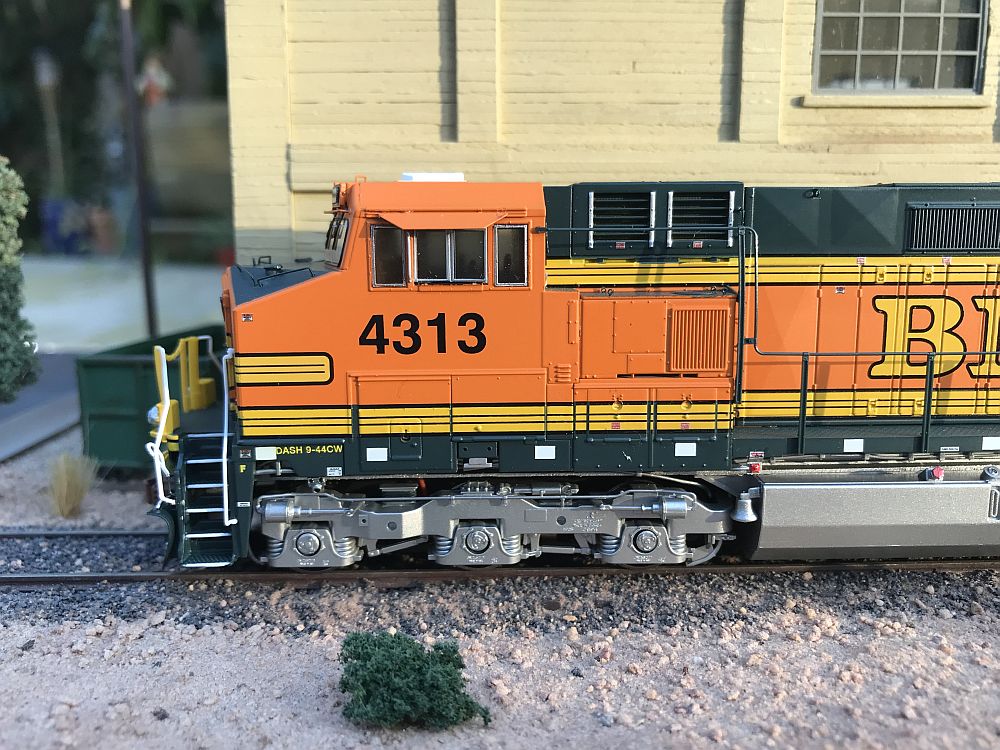 It is noted that ScaleTrains.com modeled this "as delivered" however I still cannot find proof.  Most shots show this unit alternating between one with a narrow grill that is the height of the model's, and wide grill that is as wide as the model's, but shorter in height, having noticeably more space between the grill and the top of the AC unit.  Two 4300 prototypes photographed by me, below, demonstrate these AC differences.

Overall I'm giving the ScaleTrains.com BNSF Dash 9 a 4.5 out of 5.  Even with the minor detail loosening and some junk here and there (fuzz, shavings, etc), ScaleTrains.com has done BNSF AND Norfolk Southern modelers a favor and faithfully represented the "Double X Panel" dash 9 that they are the only owners of!  Previously modelers were forced to replace the single X panel on the filter cabinet with Details West Parts.  MTH did correctly replicate this in HO scale, only recently in the past few years.  But these 25 year old prototypes have been missed for us non-brass modelers!

The AC unit issue drops the model the half mark.

Future articles will discuss this model compared to an MTH BNSF model in our Side-by-Side reviews.  I'll also explore weathering this model on an upcoming video series.  I'm entertaining a short article about replacing the AC unit with a Details West part as well.