While iron has been in use for millennia and low grades of steel for a few centuries, mass production of both did not begin until the Industrial Revolution. Within a century steel supplanted iron as the metal of choice, and during that time saw four different furnace designs for producing steel from iron. Today, steel mills are still the epitome of heavy industry with all the grit associated to it.

Raw Materials
The production of iron and steel begins with three main ingredients: iron ore, coal and a flux stone. The raw materials are brought in by rail, barge or ship and stored in material yards near the blast furnace.

Ore
Iron ore comes in a number of minerals. The most common minerals during most of the use of iron, has been limonite, hematite and magnetite with iron content up to 72%. By the mid 1900’s, high grade ore was growing scarce. Experiments were started to find a way to use a low grade ore called taconite, which makes up the bulk of today’s ore supply

Flux Stone
Flux stone can be limestone or dolomite and is used to remove impurities during the iron and steel making process. The stone is mined in massive quarries and crushed to desired size before being shipped to a steel mill. While the blast furnace can use a flux stone shipped like this, other second level furnaces need a better flux stone. For this use, the stone once crushed to a desired size is sent thru a vertical or rotary kiln and baked to remove moisture. This is called burnt lime or burnt dolomite and used to refine the chemistry to tighter values.

Coke
Fuel comes in two forms, liquid and solid. Most primary blast furnace fuel is coke. Coke is made by baking coal at high temperatures in a sealed oven with no air flow. During the baking process, volatile hydrocarbons are baked off leaving a more pure carbon source.  The volatile hydrocarbons can either be captured and used in the chemical industry or burned off as waste. 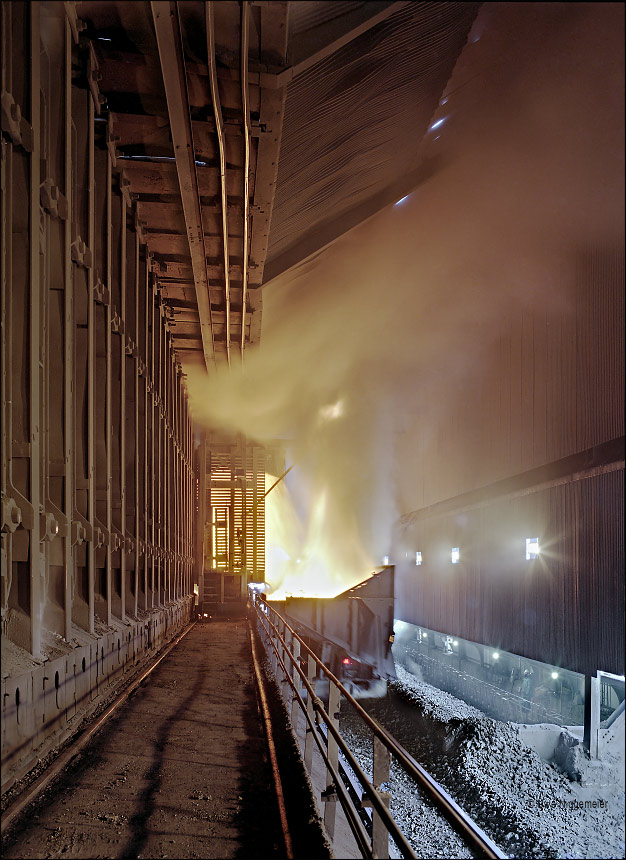 While ore and flux stone are processed outside a steel mill, integrated steel mills will have a coke plant on the property or nearby. Coal is dumped at a receiving pit [A] or nearby and fed into a breaker building [B]. After being broken to size, the coal is fed into a receiving bin on top of the coke oven [C]. Coal is fed into the ovens by a lorry that moves across the top. After baking, a pusher machine will remove the doors [D] and push the coke into a special receiving hopper car [E]. This hopper car is then taken to the quench tower [F] and cooled off with water sprayed onto the coke until cool. The cooled coke is then taken to a yard or silo for storage and latter use.

Other Components
Secondary fuels range from the condensed off gases of coke ovens to waste motor oil and are injected into blast furnaces. In addition to the three primary raw materials, everything that comes into contact with liquid iron and steel is lined with refractory materials like brick and clays. A substantial amount of sand is also used for lining the floors of various buildings. 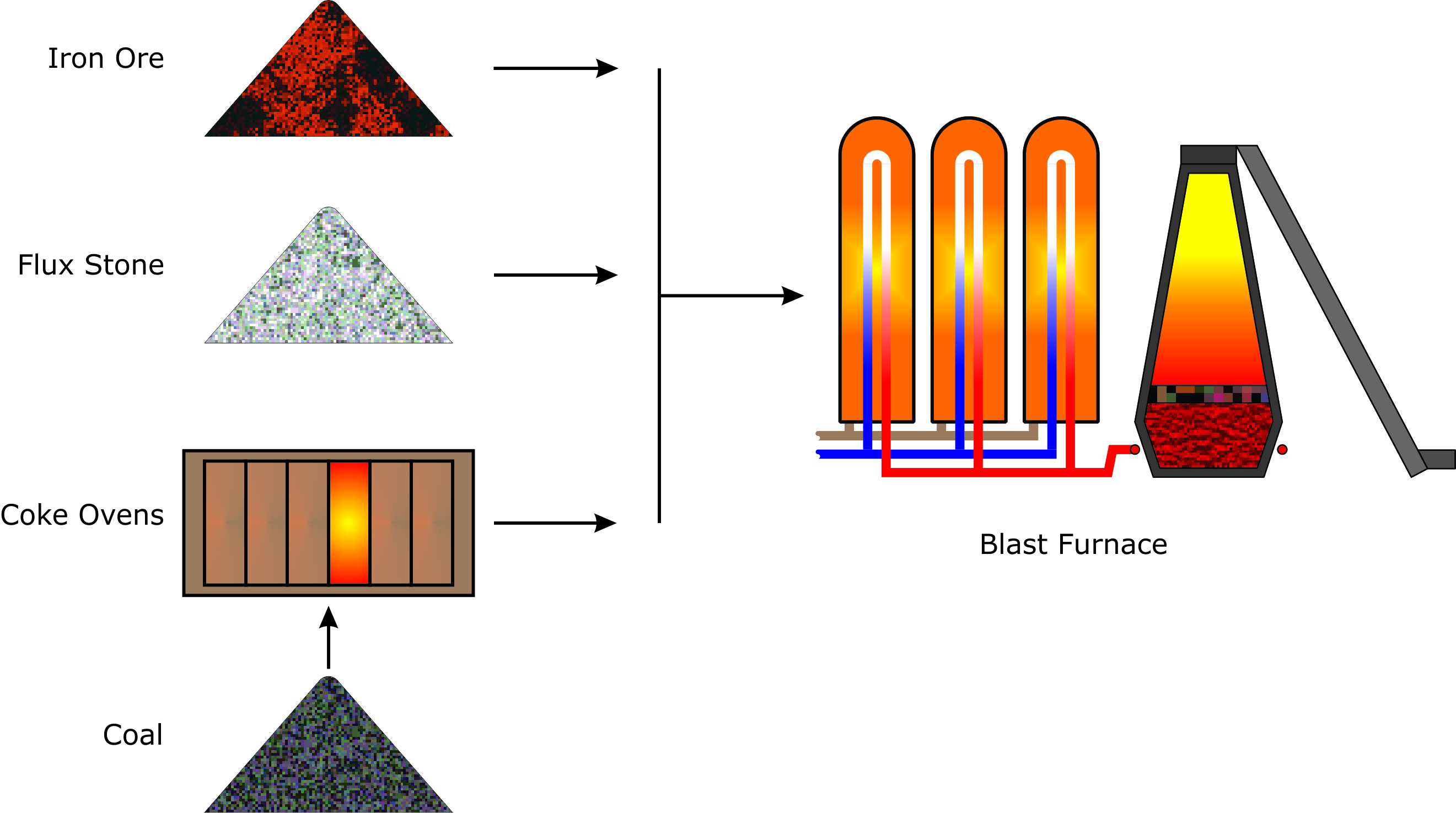 The Blast Furnace
The first step of turning raw materials into steel begins at the blast furnace, where the iron ore, flux stone and coal are brought together. Figure 2 shows a general layout for a blast furnace.
The blast furnace is basically a large bottle with air fed into the bottom and up thru the molten iron and over burden. Air and natural gas are burned [A] and the exhaust is fed into several large cylinders called stoves [B] which stand to the side of the furnace and are giant heat exchangers. High pressure ambient air is fed [C] into the stoves are heated by conduction thru refractory brick and duct work. The heated air [D] is then fed into the furnace thru tuyeres [E].

Raw materials, ore, flux and coke, are carried to the top of the furnace by a skip hoist or conveyor belt [1]. At the top of the furnace [2] a double bell feeds the furnace. The double bell works by opening the top bell to receive materials. The top bell closes and then the bottom bell opens, dumping the materials into the furnace. The bottom bell then closes and the process begins again. By keeping one bell closed at all times, the heat and exhaust is vented off near the top and taken to gas cleaning equipment before being exhausted into the open air. Newer designs use an automated system which replaces the bell.
As the raw materials are heated [3], they undergo various changes. The coke burns drawing oxygen out of the ore, reducing it to nearly pure iron. The heat generated melts the iron (melting point of iron is 2800℉). At this point, the molten iron has various impurities from the ore as well as coke. The flux stone then draws out many of these impurities producing slag.
Slag is tapped periodically [4] into slag cars, which look like big tea cups, and dumped into a slag pit. The slag can is then broken up to maximize the space consumed, and can be collected for use in construction materials like asphalt.
Molten iron is drawn off periodically [5] and either fed into large bottle or torpedo cars to be taken to the next step for steel production, rolling or cast into pits within an adjoining structure called the cast house for casting into pig iron. 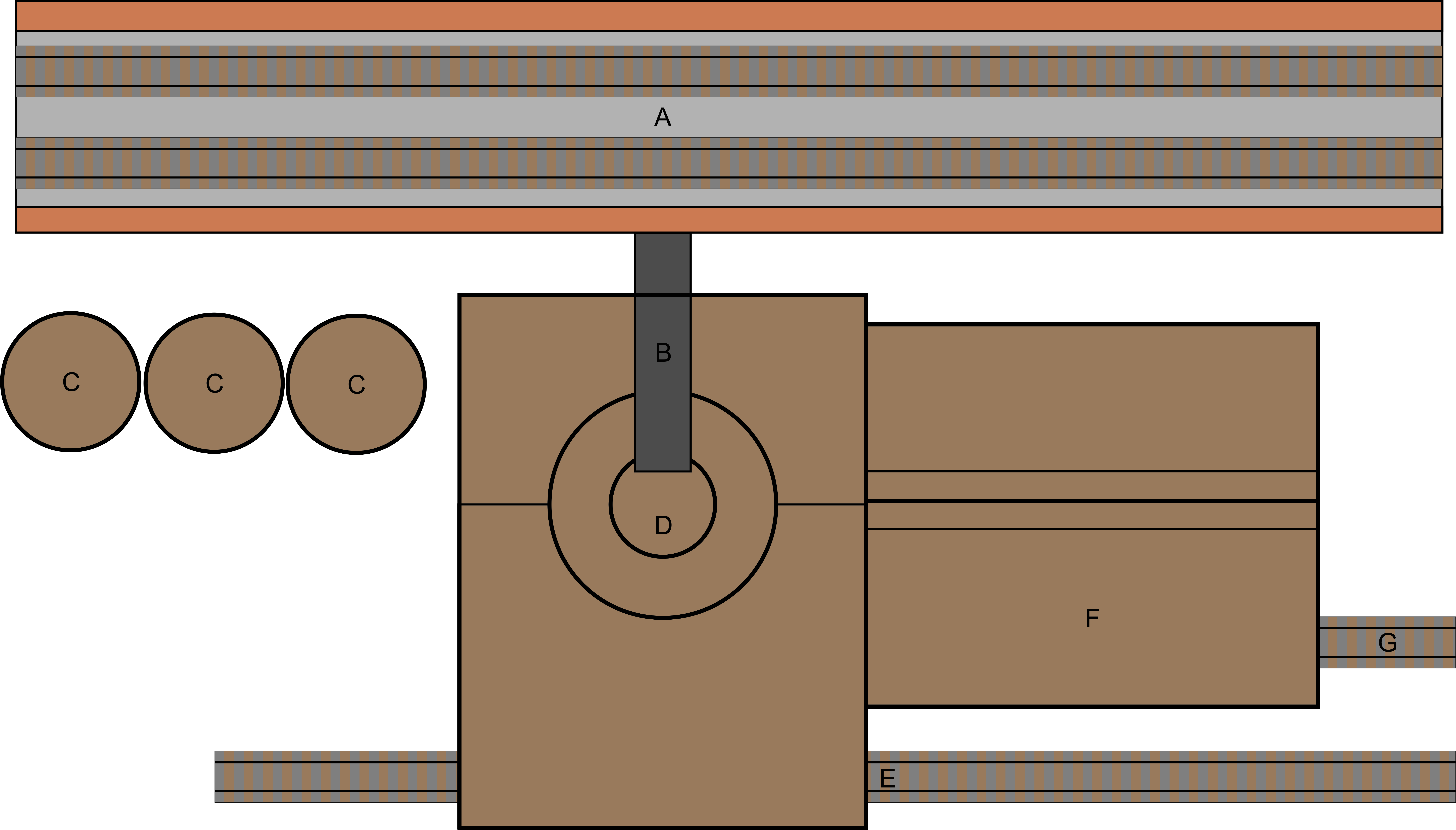 From the air per Figure 4, raw materials are delivered by a highline [A] or a crane into hoppers that feed the skip hoist/conveyor belt [B]. The stoves [C] pre-heat the air to the side of the furnace [D]. Slag is tapped onto a side track [E] and molten iron is tapped in the cast house [F]. In the cast house, either pig iron is cast or the molten iron is fed to the hot iron track [G] and into bottle cars.
The name “pig iron” is derived from the original process. Early methods of making pig iron, was to feed the molten iron into a trough which fed into a number of pockets. The pockets looked like little pigs feeding from the mother pig, and so goes the name. Today, automated feeding systems feed liquid iron into a holding ladle which feeds a conveyor of trays. The molten iron fills the trays which slowly move away and cool. At the end of the conveyor, the ingots drop off and the trays return to the starting point. 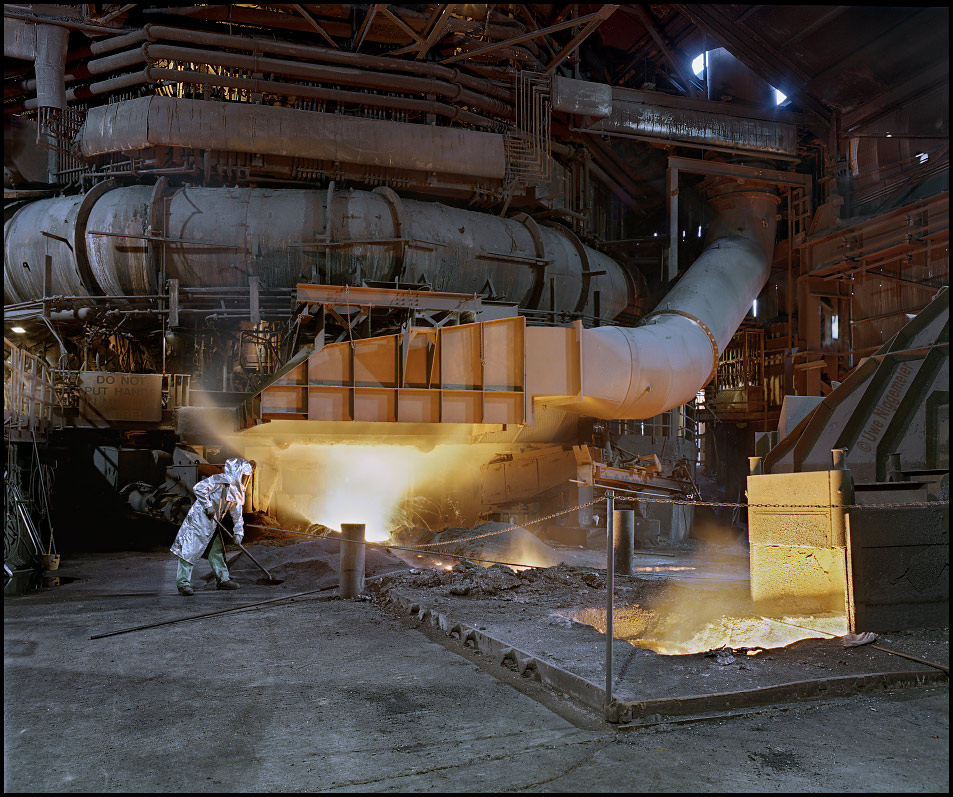 Acknowledgements:
Figures by author.
Pictures by Uwe Niggemeier with additional images from around the world located here: http://www.stahlseite.de/