How I "fixed" a 1:87 (HO) Chevy Bel Air. Simple step by step, on giving your scale vehicles a different look.

When I was sorting a recent collection of the HO scale vans available at Wal*Mart, I discovered I had bought a
damaged one. Instead of just fixing it, I decided I'd take the wheels for one of my yellow & white Chevy Bell Airs.
Here's what I did. 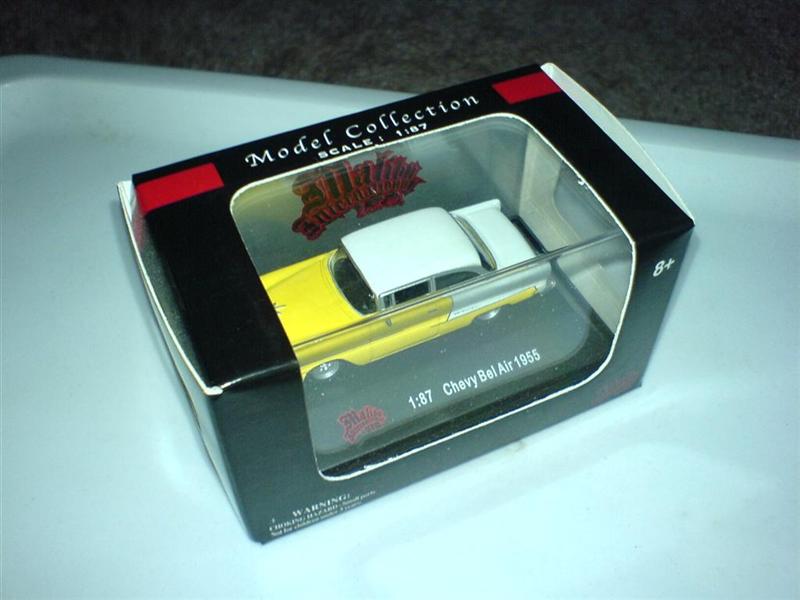 Step 1, I dismantled the van, which was quite simple, as it was half apart already. I removed the wheels &
axles, and set them aside, discarding the body and, interior & chassis in my scrap bin.

Step 2, I did the same to the Bel Air. Die cast cars are not as simple as they look to dismantle. The Bel Air has a
pop rivet on either end which holds the chassis to the body. After some crafty poking with a knife, I coaxed the
chassis/interior out.

Step 3, Since the car was apart, I carefully painted the headliner white, and the interior white also. This gives the
car a more finished look, then the plain black interior.

Step 4, involved removing the wheels from both of the van axles. You may ask why I went though that work. The
van's wheels had a deeper offset, which has to be carefully filed down.

Step 5, After some careful filing, I used a drop of Insta-Cure+ Cyanoacrylate (CA for short) to re-attach one wheel to the axle.

Step 6, Now, trim about 1mm off the opposite end of the axle, and press the other wheel on, then test measure it
to the stock Bel Air's axle. You're looking to get the outsides of the wheels to the same distance. If they're too
long, trim a little more, just remember to work slow. If you trim to much, just simply take one of the Bel Air's stock
axles.

Step 8, once everything fits, remove the pressed one wheel, apply a drop of CA & attach.

Step 9, Once dry, slip into the chassis (I chose to CA them back in, because I don't want my cars rolling away on
a grade!), and press the interior back onto the chassis.

Step 10, fit the chassis back into the car, you may have to glue it back in due to the way your removed it, just
use a few drops of CA.