The recent storms bringing heavy snow to much if the Midwest reminded me of snowplow extras that I used to see in the Upper Peninsula of Michigan. The Soo Line would use a large Jordan spreader with a full height vee-plow on the front. Motive power would be a GP-7 or GP-9 followed by a wooden caboose. The advantage to a Jordan spreader was the long wings that could be expanded out to clear snow back several feet from the right of way.

The Copper Range Railroad used a wooden Russell snowplow. Although it had “wings” most snowplows cannot clear a swath as wide as a Jordan. The Copper Range also had a Jordan but it was much older and lacked the vee-plow on the front. Their trains were assembled differently. The Russell plow was first, then one of their Baldwin switchers , followed by the Jordan and brought up by the caboose.

Since some of the Copper Range route was paralleled by Michigan highway M-26, I’ve paced them as they rolled along at 25-30 miles per hour through the countryside. They would stop in small towns to back up and use the Jordan to clear away from sidings and around switches Also a crew riding in the caboose would dismount and sweep out the switch points. 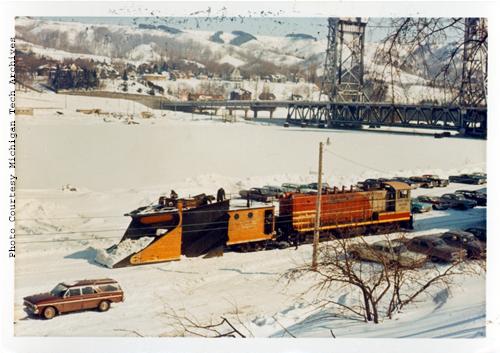 Most snowplows had flangers, a small blade that could be lowered to clear between the rails. Care had to be taken to raise this device at every highway crossing, switch, bridge with center guard rails, etc. Calamity would be the result if this was not done before the “obstacle” was reached. To make this easier railroad would put some kind of a marker along the right of way to make certain plow operators were aware of any obstacle ahead. The Copper Range RR used a sign that looked like a large hockey stick. I’ve seen markers elsewhere that were a yellow triangle with a red dot in it. Whatever the case, the warning was to be heeded.

Snowplow operations can be modeled in any era, since they still are needed even in the 21st century. I model 1956 and I’m lucky enough to have an old LaBelle model of a wooden plow. I run a snowplow extra with this consist. First is my wooden plow. Then the motive power, usually a geep of some variety. Next comes my homemade kitbashed antique Jordan. Then comes a tool car which I imagine to be filled with shovels, switch brooms and a small crew of men to use them. Then, lastly a caboose.

My homemade Jordan is patterned after one that resides at the Mid-Continent Railroad Museum in North Freedom Wisconsin. You can see a picture of it at http://www.mcrwy.com/collectn/service/lstt55.html

I used an Athearn flatcar as a starting point and used plastic sheeting to make the plow and wings.A few years ago Walthers came out with a modern steel Russell plow that could be used for modern operations, however I could not find it listed in their current catalog.

A snowplow train could also include a track cleaning car to actually do maintenance on the model railroad. Such equipment adds to the railroad atmosphere just setting on a siding. It can also be a fun way to add some variety to operations.