Checking out the TLT MP36, details and operation

True Line Trains did a wonderful job of replicating the MPI MPXpress MP36/40 series. Although it's nearly three years after I expected to have mine, they finally got to the Metrolink MP36PH-3C in the summer of 2013. I preordered mine through Overland Hobbies: http://www.overlandhobbies.com/ 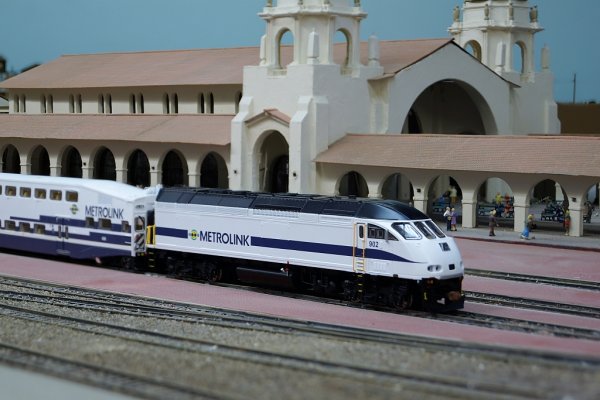 Initially out of the box I was impressed with the detailing, although not of the highest quality (minor under body details left off), all details are desperate, and accurate. Paint is smooth, evenly applied, and accurate. True Line Trains is a
stickler on paint, their facebook page indicated that some schemes are very hard to mask and paint due to the complex curves of the MP36/40 body (forgive me I cannot find the post). My model arrived with one wiper completely missing from the cab, TLT was able to send a replacement arriving just in time for the scheduled photo shoot, however I got the wrong variation. I installed it anyways.

The San Diego Model Railroad Association was courteous enough to allow me to stop by on their monthly Sunday operating session/museum duty day. Prior to the the Model Railroad Museum opening, I was able to set up from the outside (visitor isles) to photograph the locomotive and Athearn Bombardier commuter cars at their model of the San Diego Santa Fe Depot. 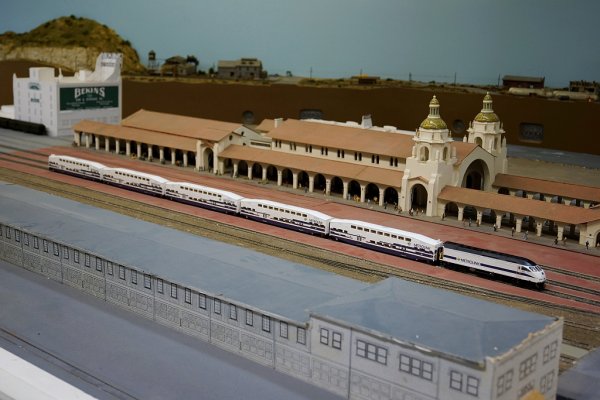 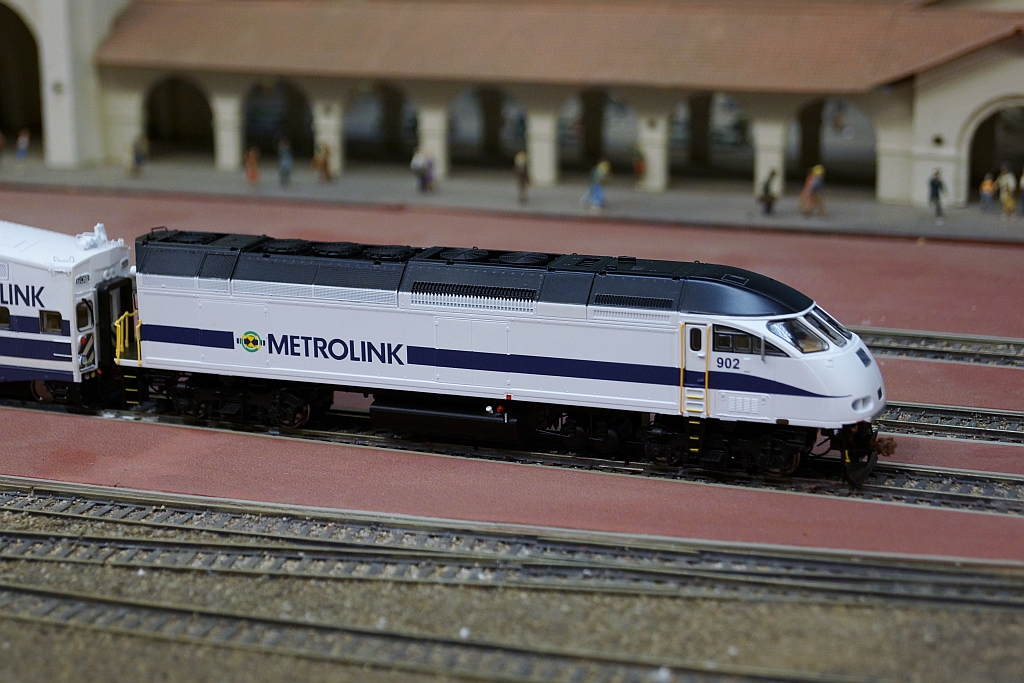 After some photos, and learning the club's DC block/DCC operating system, I was able to spend two hours operating the train on their layout. Overall the MP36 performed well, with a few minor stalls (track related). However, the weight of the five car train caught up to the locomotive in the twisting grade from Campo (modeled) to Cima (modeled), a gain of 14". I required assistance from a trailing freight train to make the grade due to the wheel slip. The club's Operator's Guide suggested that an equivalent (F unit) locomotive is rated for 6 passenger cars through this grade. Compensating for the operating era, and the weight of the Athearn cars (they're 2oz heavier than recommended by NMRA RP 20.1), this explains the heavy wheel slip. 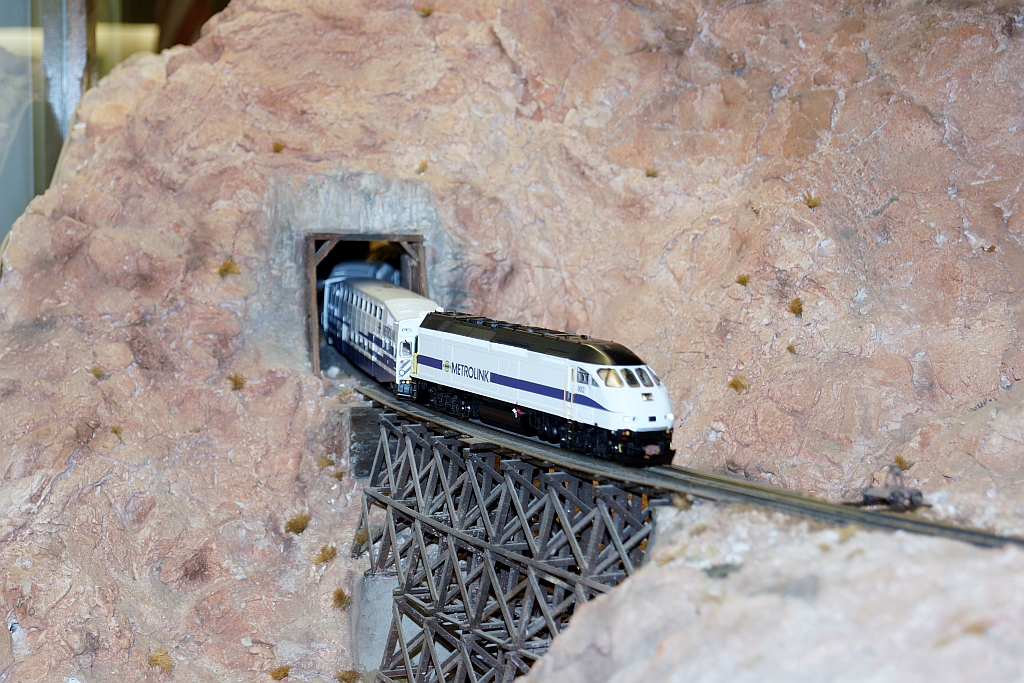 Overall the True Line Trains MP36 looks great and operated outstandingly. Sound was appropriate (though I have set it at 50% volume), and pulling power more than adequate. 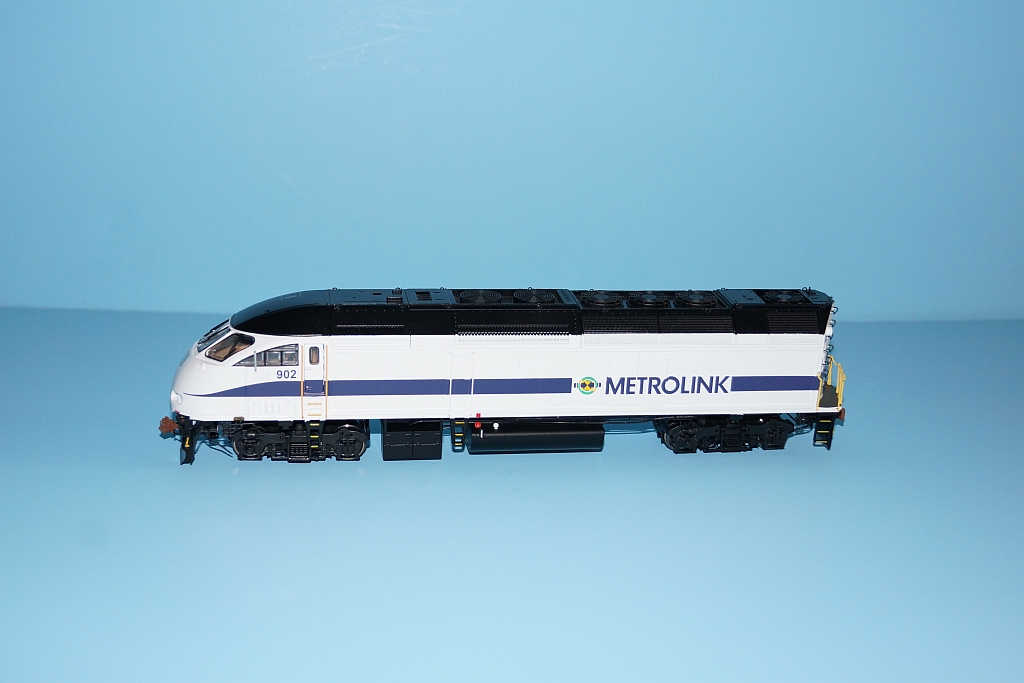 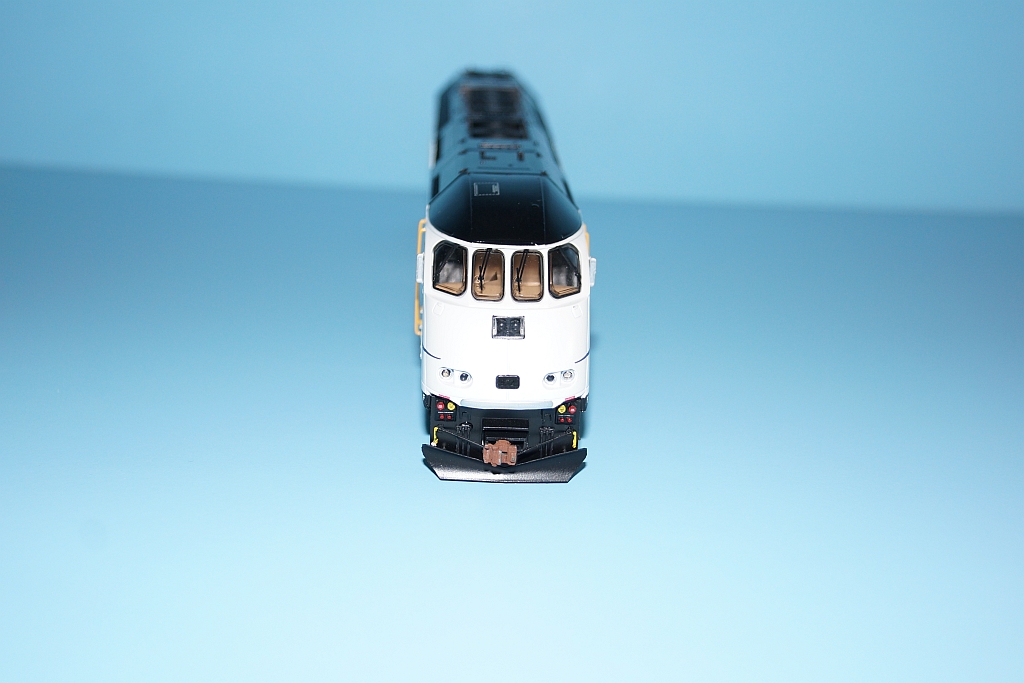 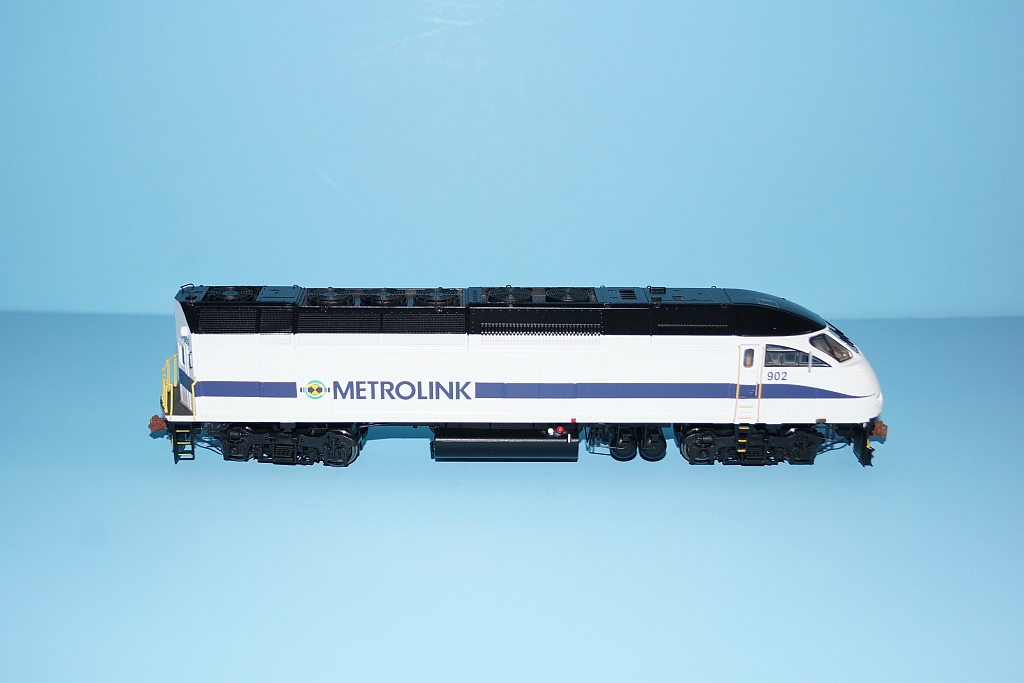 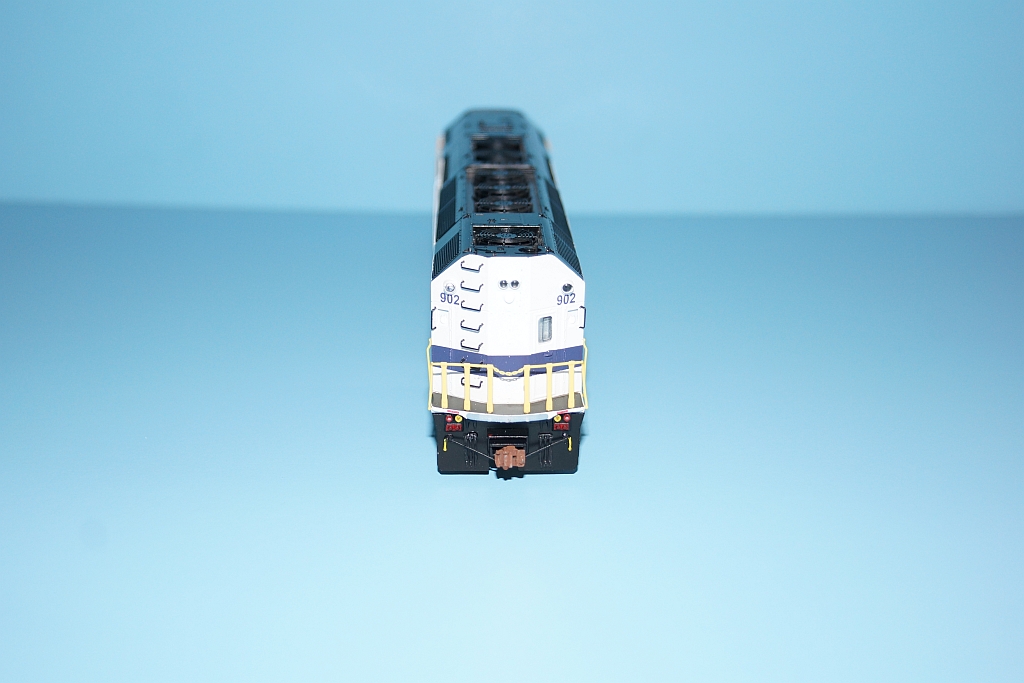 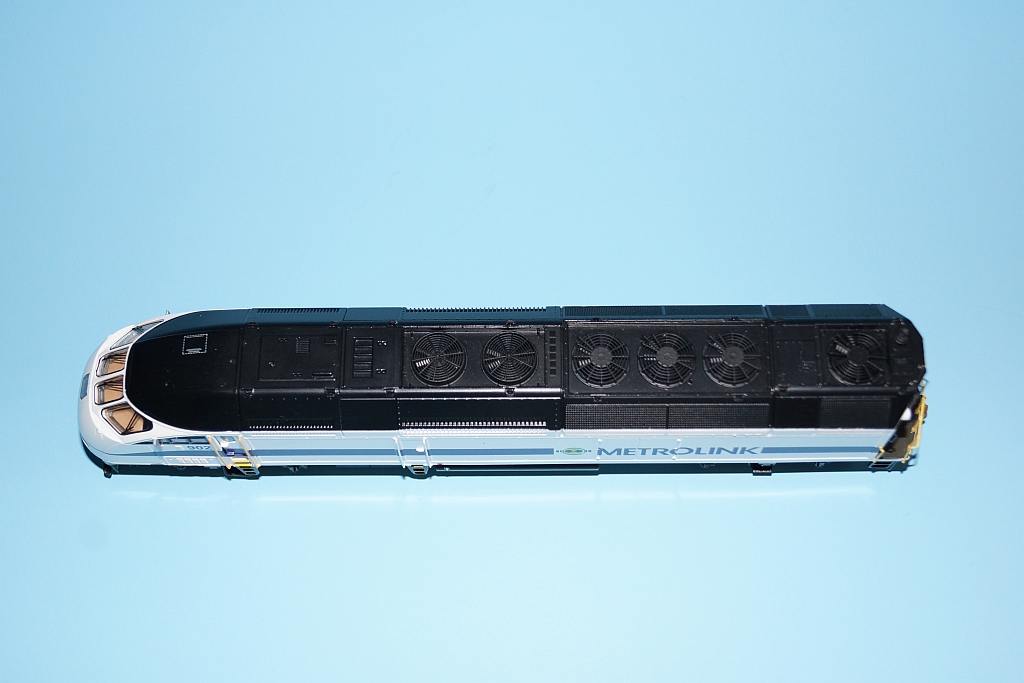 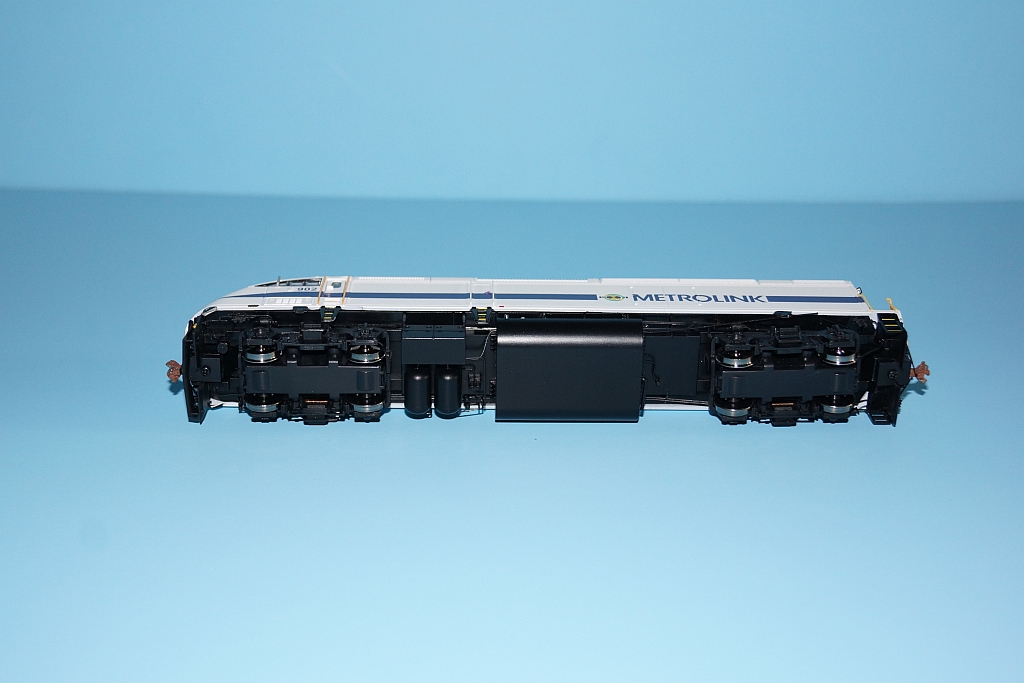 I must warn all potential buyers, the body on the locomotive is secured with six small tabs, three on either side. Lifting the model by the body IS NOT recommended, as the shell can easily slip off. Gaining access to the interior is very easy however! Interior lighting in the cab is calling out for crew figures, though I have yet to figure out how to turn the lighting off (I figure, when in push mode I should shut it off). 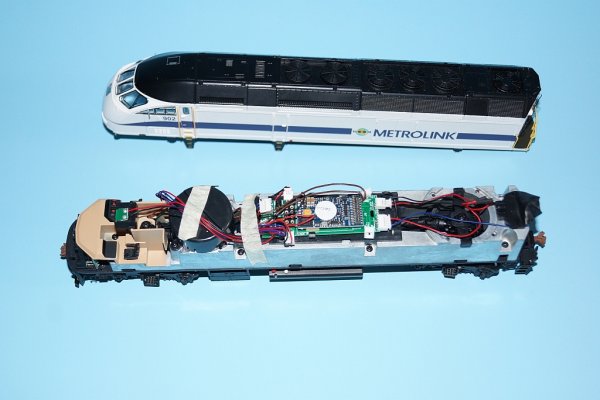 Equipped with Sergent Engineering Type H couplers, the train held together tightly. The couplers allowed the diaphragms on the Athearn cars to touch and look very realistic. The Type H couplers also realistically avoided derailment issues, on two occasions one intermediate car derailed, yet stayed upright even though the locomotive was still pulling the train along the tracks.

I'm leaving a full 4 out of 5 for this locomotive, despite the minor damage on arrival (that happens), the overall performance was great. Issues with the instructions included for the DCC (determining CV's to change for the lighting), lack of some details, and the body slipping off all played a roll in the rating.