Released in October 2021, this simple to assemble kit comes in a multitude of paint schemes, representing 2 real and several foobie schemes.  These affordable kits are great for the budget conscious, but also represent a rare prototype assembled by the CB&Q Havelock shops.

According to ScaleTrains website the prototype dates from 1967/1968, built for the CB&Q (Burlington), by their own shop.  When I heard these cars were coming, I jumped on a preorder for the three green BN cars.  Although my era would better be represented by black BN or BNSF cars, I desired odd BN/BNSF gondolas for my layout. 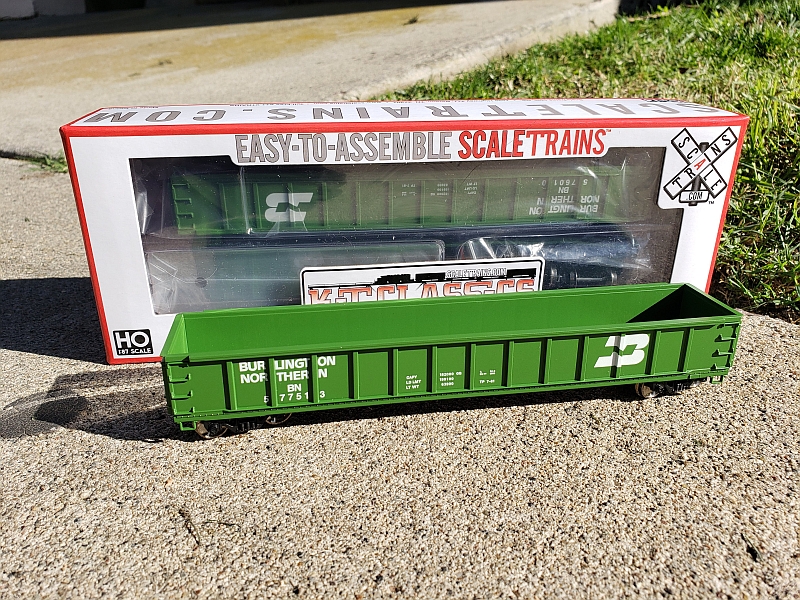 As you can see the car come packaged in a nice clear top box, which is great when (if) these show up in hobby shops. However, I'm not sure if it was an error, or what, but all of my cars came "upside down" inside.

ScaleTrains touts these as being able to assemble with a screw driver.

I started assembly on two of my cars quickly.  I noticed very fast that the 4 screw floor attachment process worked great, however the weights move around ever so slightly.  I attached the coupler box lids now, as I won't be using the included couplers.

If you look closely, you'll see that I stripped out the screw heads on the trucks.  This happened with 3 of the screws, across 6 total (3 kits).  I really do not like the screws included.  They're a different head size from the other 6 used on the floor of the car.  Note those 6 screw went it with no issues, and are flathead style with a tapered thread side of the head, so they could not be confused for the truck screws.

The plastic brake parts are now attached.  ScaleTrains does not mention glue, but I found that the parts fall out without.  I used plastic cement on 2 kits, and gel CA on the 3rd.  Both methods worked fine.  There's a total of 10 glue points to install 4 parts.

I have to give it to ScaleTrains, for a kit, the under floor brake rigging is quite nice.

Following my other reviews, I checked the weight of the car assembled.  A car of this length should weigh in at 4.75oz to match NMRA recommended practice.  Fully assembled all 3 of my kits weighed 4.4oz, slightly below, but within acceptable range.  Coupler height was not checked as I never installed any couplers (Sergent couplers after weathering for me).

Once finished the car fits nicely and snugly back into the packaging, which is a huge plus!

This is the 2nd "Kit Classic" ScaleTrains has released, however I did not purchase any of the boxcars, so I cannot compare it to one of those.  Side-by-side with a Walthers Mainline Railgon (Side-by-Side: HO Scale Railgon Models), of comparable detail and cost, I'd give the win to the ScaleTrains.  These one-of-a-kind cars, are a MUST for any Burlington, BN, or BNSF modeler, I sure hope a 2nd run includes BNSF or BN schemes, or at least and Undec!  I suppose a N&W, CNW or Conrail kit could easily be re-lettered for BN or BNSF.  If these are still in stock in a month I may just order one to do so.

In the end I have to give the kit a 4 out of 5.  I docked 1/2 point for the molded on grabs (expected in a kit of this price point), but then added 1/4 back for the $17.99 price tag.  I then removed that 1/4 again due to the run of 6 schemes, with 2 prototype, and none were the most common, black BN/BNSF schemes.  I removed another 1/2 point for the failure of the truck screws and the loose fitting brake parts, only because ScaleTrains touted that the kit only required a screwdriver, which it clearly required some glue.

Even with the 4/5 score, I'd still recommend these cars to most any modeler.